Why I Love Better Call Saul 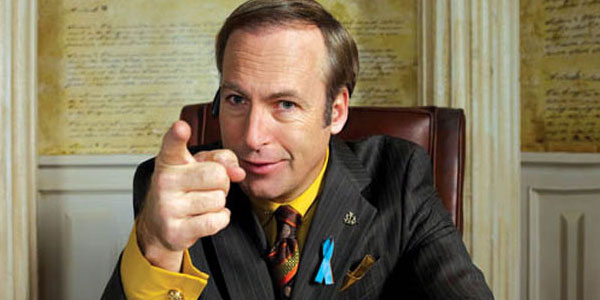 I was a fan of Breaking Bad. It was a beautiful, thrilling machine. When that machine was going forward with Walter White's story, it was sublime. When that machine stalled to say explore Marie's kleptomania it was frustrating, sometimes bordering on bad. I can say with no hesitation that Better Call Saul is just as good as that show, with none of the problems.

Let's start with Bob Odenkirk. He takes a character who is, while eminently likeable, a crook and a cheat and gives him emotional depth. Thank in some part the writing, which is always sharp, on point and full of subtle details that help take an entertaining supporting part and make it into a fully fledged lead role. It would however all fall flat on its face if Odenkirk wasn't such a marvel at playing with the expectations of the audience and making Jimmy McGill a tragic character. He wants to do the right thing and for much of the first season of the show, that is what he does. Every now and then opportunities present themselves and they tempt him to cross over the line and take some easy cash.

That such a straight up comic relief character could support his own show is remarkable. That he is ultimately as much a tragic character as Walter White is equally surprising. He has love in his heart for his brother, for his friend Kim Wexler and yes for his clients. He genuinely wants to help them. That this sometimes results in illegal behaviour is just part of the game. When his brother betrays him and likens Jimmy to a monkey with a machine gun, we feel terrible even though it is probably true. Jimmy thought becoming a lawyer like his brother would finally make Chuck respect him. And that he could finally approach Kim as an equal. He worked as hard as anyone and should by all rights get a clean break and a second chance but his past just won't stay past.

Better Call Saul is just as much a Noir story as Breaking Bad was. Flaws in character create the cracks that will bring on a reckoning. That easy way out is always at the back of the mind and the inevitability that Jimmy will go for it is something that makes the show so compelling. We know this won't end well. We have already seen where Jimmy ends up. While he doesn't meet his end in violence like his associate Walter White, he ends up with nothing and no-one, working in a Cinnabon to pay the rent. He watches old videos of Saul Goodman to remember a time when he was somebody with a purpose.

Speaking of Noir, we have to mention Mike. Mike is as Noir as it gets. He is an ex-cop whose son has been killed for refusing to take bribes. Unlike his son Mike was a dirty cop. Now he is desperate to make things right for his daughter in law and granddaughter. While he tries to stay clean, he needs to make cash fast. As the money needed goes up, Mike is forced into returning to the world he wanted to leave behind. Jonathan Banks touch in this role is so low key and unassuming that you are as surprised as his enemies when he becomes intensely threatening. He is just as much a reason why Better Call Saul is so damn good.

So let me close by saying that you should all watch Better Call Saul. It is very funny, sometimes scary and often moving. It has all the quality of Breaking Bad, with its own unique voice that more often than not results in a show that is top to bottom better than its predecessor. It is a marvel and something that will stand the test of time with grace and dignity. Much like Jimmy himself.