Why I Love Michael Jackson 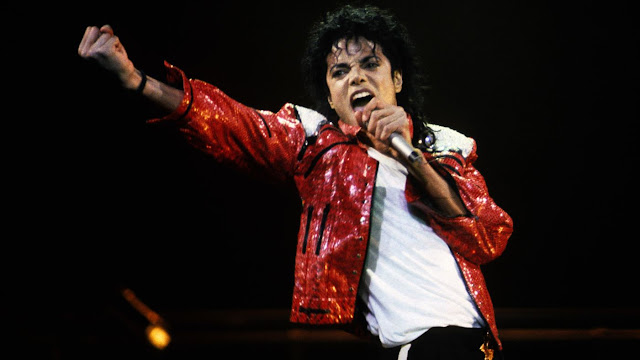 "Tell me what has become of my life
I have a wife and two children who love me
I am the victim of police brutality, now
I'm tired of bein' the victim of hate
You're rapin' me of my pride oh, for God's sake
I look to heaven to fulfill its prophecy
Set me free."

Michael Jackson was my first musical love. When I was a little human, I looked up to MJ. He was the coolest human being to ever do it. I remember throwing my hat in France as a kid, like Michael did. I remember staging an elaborate musical performance for my Granny and Granddad of Smooth Criminal. I have had many musical obsessions: Brian Wilson, Lou Reed, Bob Dylan and Prince. NONE of them were as transformative or as powerful as Michael.

(A note on his supposed cases of child abuse: I don't believe a word. This is not my putting my head in the sand. This is my assessing the situation and taking the facts as they come. I don't believe the testimony of those who said he was a pervert. I believe that he was sensitive as all hell and couldn't possibly assault anyone, let alone a child. I also find it hard to believe he was sexual in any respect, let alone something twisted and unnatural as pedophilia. More to the point and regardless of my personal feelings, MJ's legacy will live forever, even if he was by some strange chance guilty of these crimes. He was as important as ANYONE in the last century musically and culturally.)

Michael's competition was fierce. Prince was forever at his heels, pushing him on, pushing him to be better than he already was. It is a testament to how unbelievably talented Michael was that he made Prince seem small time in comparison. There are those that will say that the true music aficionado preferred Prince. These are, to borrow a coarse phrase, full of shit. They say Prince produced and played his own instruments. Well so did Michael. Listen to the gorgeous and evocative Stranger in Moscow and try and doubt his ability. A better production than ANYTHING Prince ever did. Sorry, Prince, you know I love you but it's true.

Michael was the most gifted man of his generation. He was so good that he made legendary talents like Stevie Wonder and Prince pale in comparison. This is an immense achievement. He was largely R&B but he was never restricted by that label. He could do Rock and Pop just as easily as anything. He was the inspiration for countless artists, including but not limited to, Usher, Britney Spears and Lady Gaga.


Let's talk about some of Michael's best songs. Smooth Criminal has to be on the list, if for no other reason than the sheer astonishing perfection of the video.

This is everything I ever wanted to be when I was young. Through movement and precision and an unnatural ability to transmit pure love and emotional highs, he takes you and lifts you up. Your feet never touch the ground. A small bit of trivia: the original title for Bad was Smooth Criminal. Quincy Jones objected and said "As long as I am here, there is no way MJ is putting out an album with criminal in the title." Another great track from Bad is Dirty Diana, notable for being the most explicit example of MJ influencing The Weeknd, who covered the song on his third mixtape Echoes of Silence. Some gullible schmucks labelled the song problematic for reinforcing sexist attitudes towards female groupies. As with everything Michael did, there is no malice in D.D. It is a record of true events and represents a real kind of person who gets their self-worth through a parasitic kind of love. That chorus... pure magic.

Gotta shout out Baby Be Mine, my second favourite track on Thriller. It just moves. It makes you want to dance. Some say that R&B is "only" dance music or sex music. Well, what the hell is wrong with that? Expressing yourself through your body is just about the highest calling for a man or woman. Let go of your insecurities and dance. Last shout out to Can't Let Her Get Away from the New Jack Swing genius Teddy Riley. My personal preference for MJ producer is Teddy Riley any day of the week. He had a fresh sound that energized and inspired Michael in a way that he hadn't had before. While Quincy was a stern but proud father, Teddy Riley was a peer and friend. The song is just a lead up to the crushing brilliance of the bridge. Those backing vocals...astonishing. At about 3:22 it happens. Covers you in pure, radiant love.

HIStory was the place where Michael lost the iron grip of quality control. Yes, there were undeniably hits and savage good songs but there wasn't the same 100% hit rate of his previous four albums. I have compiled an Alternate HIStory which addresses these problems and replaces duds with big time hits from the Blood on the Dance Floor EP. A little judicious editing and a problem album becomes a Thriller/Bad/Dangerous beater. This is another sign that Michael was just as capable of recording great material as he ever was, just that his sense of editing and quality control had become flabby and skewed over the years. 2 Bad sits so nicely before Superfly Sista. Here is real quality that cuts out the bullshit and leaves the cream on the top.

Take the song Morphine, surely the most personal song in MJ's career. Here is something that laid the groundwork for the entire new R&B movement of the second decade of the 2000s. Here is something that expressed a closely held secret openly, in front of the world. "Demerol. Demerol. Oh God he's taking Demerol. Demerol. Demerol. Oh God he's taking Demerol." Listen to the reverence that The Weeknd or Frank Ocean has for mind altering substances and track it back to the unlikely source of Michael Jackson. Not only did MJ influence every man, woman and child of generations, through his precise, immaculately executed performances on screen and live, but he also did with the tone and subject matter of his later material. We love what hurts us most.

Michael was the greatest man to ever do it on that stage and in the studio. He gave my young life meaning and inspired me to do creative things. As Joseph Campbell would say, he empowered me to follow my bliss. As a young sort who was hung up physically and emotionally, there was nothing as powerful as seeing Michael perform. He created this urge in me to get out there and do my damnedest to express my life force in public. He is the reason why I love R&B, why I believe in it as a humanizing force. He is the original creative father of Paul Casey and I can never repay that debt.