Why I Love The Force Awakens 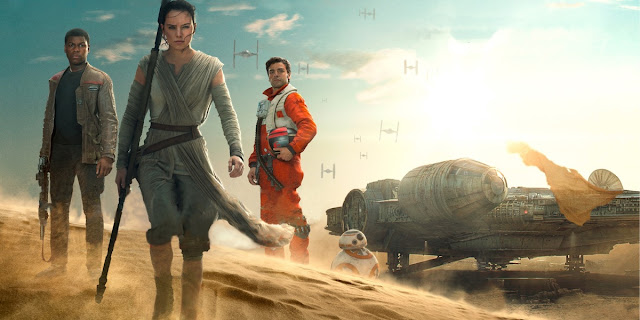 "We'll see each other again. I believe that."

I have loved Star Wars for as long as I can remember. I remember in vivid detail watching the original three films with my mother, father and brother. They dominated my imagination from then until now. The world was so wondrous and exciting. The story was universal, able to get across what it needed to say with the pure beauty of the visuals, no dialogue required. I will admit up front that I still like the prequels by George Lucas, particularly Revenge of the Sith which I still believe is a great movie in its own way. So if you're looking for me to bash those films, sorry, I won't. I will say however that the new Star Wars films are better in nearly every way. They are human, where the prequels were synthetic and distant. They are funny, where the prequels were humorless and plastic.

When I went to see The Force Awakens with my best friend Conor, I was skeptical. J.J. Abrams is someone who can be either very good (as with Lost and Super 8) or very bad (the new Star Trek movies) so I wasn't sure what to expect. Well, knock me down and walk on my back with delicious furry feet, it was amazing. Like it wasn't even close. These were the true follow ups to the original trilogy. Abrams' just got it. It is clear to see that while he hated the original Star Treks, he had reverence for the original Star Wars. Everything about the movie is dead on. The tone, the story, the special effects. Gone are the synthetic and unbelievable digital effects and in are practical effects mixed with classy CG. CG is only used where it is superior to physical effects. What needs to be physical is physical.

The new characters! Jesus! They are so good. I would go on any adventure with them. Rey, Finn and Poe are such brilliant creations, particularly Rey who is my favourite character in any Star Wars film. She is strong, smart and completely believable as the lead hero. She is one of the best female leads in anything. You believe in her and you want to see her conquer the challenges she faces. Daisey Ridley plays it so well. At first glance you think she is going to be annoying in the Keira Knightley way, but she is so likeable. "Stop taking my hand!" If there was one quote that defines how the series is going to treat female characters, it is this one. A funnier and more laudable line I cannot remember in a Star Wars movie. BB-8 is maybe the best droid in Star Wars history. When he gives Finn the thumbs up, I lose it. So incredibly cute! Hearing R2-D2 talk with BB-8 is one of the great joys to be found in The Force Awakens.

The villains are also excellent. Kylo Ren, played by Adam Driver, is the classic wrestling heel. A pure babyface turned bad guy. Killing Han Solo is the get over with the audience moment. Wow, he is really bad huh? Visually he is almost as imposing and scary as Darth Vader, even while he is undeniably weaker than his grandfather. Driver nails the evil, but insecure nature of the character. Supreme Leader Snoake played by the digitally savvy Andy Serkis is also a thrill. Mysterious and devilish.

The way The Force Awakens treats its older characters is also exemplary. Han Solo and Chewbacca return and aren't just in a cameo role, they are real characters who are important to the story. "Chewie we're home." Harrison Ford turns in a performance that ranks with the best in Star Wars. He is still up to his old tricks, getting involved in questionable behavior. My favourite Han Solo moment is when he offers Rey a place on the Millennium Falcon. This is an important moment for solidifying Rey's credentials as THE hero for the new films. Again in wrestling terminology, this is where Han gives Rey the rub. Carrie Fisher is perfect as Leia, as much as she ever was. It is a terribly sad thing that we lost her so young. I hope the series will honour her memory.

Let's talk about some of my favourite moments. I love the scene where Finn and Poe escape from the Star Destroyer. "FN huh? Finn, I'ma call you Finn!" Oscar Isaac is SO good. I have loved his work since seeing him for the first time in Drive, and the sublime Inside Llewyn Davis. I hope he has a long run in the new trilogy. Another great moment in the movie is the escape from Jakku in the Millennium Falcon. The way the two of them support each other and pool their resources just makes me cheer out loud. The moment when Rey faces down Ren in the forest... Amazing. Star Wars was always about believing in yourself and holding onto the good in your heart and this scene gets that so well.

The Force Awakens will hopefully be remembered in fifty years in the same breath as the originals. It is a movie that is exciting as all hell, beautifully shot and surprisingly moving, something that Rogue One also got through and through. It is a movie that I will watch whenever I am melancholy, to remind me of how good people can be. The Force is something that may seem silly at first glance, but really it has a lot to say about the spiritual, soulful things in life. To believe in The Force is to believe in yourself. I am one with The Force. You can be too.