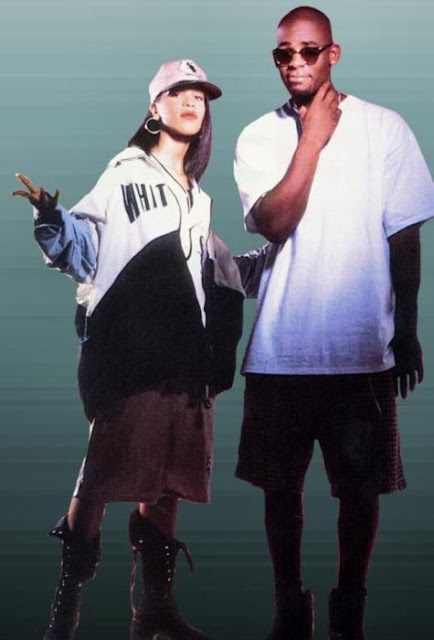 Homie lover friend is what I'm lookin for
Someone who can relate to what I have in store
She can kick back with the homies
Playin spades, gettin paid
That down to earth girl from around the way (hey)
We will be together for all times
I need a homie lover friend that will always be mine."

Homie Lover Friend Remix is my favourite song by R. Kelly in history. It is the best example of his style, his production genius and his ability to deliver a vocal that makes you feel intense love. If there was one song I had to choose to explain why R. Kelly is the most gifted man of his generation, it would be this one. Some songs take forever to get around to what they want to say. As much as I love him, Bob Dylan can take six verses before he gets to what he means. Here R. Kelly does it in one line. "That down to earth girl from around the way" on the outro. Listen to the backing vocals, the swirling synth, and that lead vocal that just destroys with goodness. In one line Kells expresses everything there is to know about love between two people. This is an incredible accomplishment and something that is beyond so many talented people.

It is probably safe to say that Kells wrote Homie Lover Friend Remix for Aaliyah, someone who he (allegedly) had a relationship with, during the production of her debut album Age Ain't Nuthin' But a Number. It is up there with The Sad Eyed Lady of the Lowlands by Dylan in the most beautiful love songs category. Some may be surprised by this comparison, and squawk that such a thing could be asserted. Well, here's the thing: while their styles are completely different, the end result is the same. That is, to express with dead on certainty the love that one person has for another. There is more feeling and poetry to the line "That down to earth girl from around the way" than a dozen wordy tomes. Where as some music tells you, Homie Lover Friend shows you.

R. Kelly's ability is pretty astonishing to behold. He has a great touch for production, arrangement (think of the sheer volume of brilliant remixes in his catalogue), writing and performance. If he had just one of these talents, he would be assured a spot in the R&B hall of fame, but as it is, he is at the top of the heap. Homie Lover Friend Remix is my favourite production of his, with a miraculous supply of overpowering atmosphere and heart. I am not positive but I am fairly sure that the backing vocal is by Aaliyah as the time frame works out, and she had also appeared on the Your Body's Calling Remix. That Kells could produce something so enrapturing and still have to suffer the indignity of claims about his dark self boggles the mind. How could someone who could produce something so beautiful, be such a bad human? If he is, and if he did, then I am at a loss as to how and why he would produce something so good and true.

Homie Lover Friend Remix was released on the soundtrack for the film A Low Down Dirty Shame. I always felt this was a shame, as it deserved a place on the 12 Play album proper. It should be alongside similarly great tracks like Bump N Grind and Your Body's Calling. It remains the high point of R. Kelly's career nonetheless. It is a song that transforms a bad mood into a good one. It is a song that is about the purity of love that is based on the heart and not the head. To love someone who is a friend is a greater thing than loving someone for their looks or sexual charisma. And yet Kells is played off as a man who cares only about the carnal and physical. Well, this is proof that he is just as capable of that deep love, that love that lasts for years on years. Kells is disrespected because he is a black man who dares to be sexually liberated. The allegations against him remain unproven in a court of law. Not that matters to some people who believe that any mud that is slung must by definition be accurate. A powerful, artistic, sexually liberated black man and people are surprised that the powers that be might want to silence him? Homie Lover Friend Remix is, in spite of all the seeming contradictions in his character, something that will last for as long as there is music.  Put it in a playlist alongside Bump N Grind Remix and get down to it.

I Don't Mean It was released in 2000, featuring on the album TP-2.com. Like Homie Lover Friend Remix, it is a song that gets down to why it is that a man loves a woman, or a woman loves a man, or a woman loves a woman, or a man loves a man. It is an apology for careless and unintentional shade that comes with long term relationships. "Thinking I'm cool, but I'm a fool." What is it with Kells and these poetic encapsulations of complex things? How can he nail so cleanly, so perfectly what it is to be in this position and to feel these feelings? Because he's a musical genius, I guess.

"Now I may say you can walk, I don't mean it and I might name call but I don't mean it. I may pull some silly stunts but that's just a front, I don't mean it." I Don't Mean It is a song that seeks to address all that casual hatred that arises during relationships of many years. The production is a marvel, leading slowly up to a vamping session that pushes the song over the line of classic and firmly into that category. And that bridge! "Turn back around, don't you say goodbye." And back into the chorus like a thundering horse or buffalo. "When I'm hollering at you..." That moment. Fuck.

R. Kelly should be considered, all other issues aside, one of the all time greats, by anyone with ears and the ability to identify musical talent. Get rid of that lingering genre snobbery and the ill judged moralizing and just listen to the damn music. The music is the thing. The music is what transforms lives. I Don't Mean It is on my desert island discs collection. It is something that I want to hear every day until I die. It is a powerful assertion of the love that grows and sticks around for a decade or more. "Now I may holler at you..." I don't mean it. This is not who I am in my heart. I am not this callous, bitter specimen. I am a good sort really. I love you.

Homie Lover Friend Remix and I Don't Mean It are a sublime duo. They both express the familiar love; the love that lasts and develops over the years. "That down to earth girl from around the way..." That person that knows you better than anyone. "Sometimes I know that I can take it just a little bit too far but my heart is good..." That person that understands you like no-one else. Admissions of insecurity, of fragility are what make this music so powerful. It is music that raises up a lowly sort and gives them a certain kind of holiness.