Why I Love Love And Theft 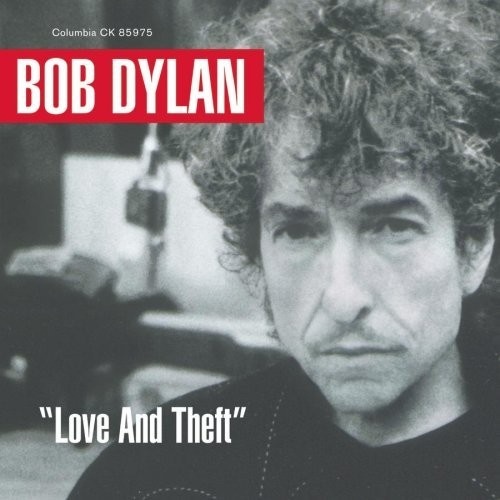 "Got nothin' for you, I had nothin' before
Don’t even have anything for myself anymore
Sky full of fire, pain pourin’ down
Nothing you can sell me, I’ll see you around."

Love And Theft was released on September 11th, 2001. It does not seem like a coincidence that the album was released on that horrible day. Everything needed for people to get back and their feet and heal the wounds, that come from such a vicious and unforgivable crime is to be found on this album. This is music that heals. It is the greatest work that Bob Dylan has done in the last twenty years. It has the scope and power of his best, from Blonde On Blonde to Blood On The Tracks. Sweet love songs, stompy Blues numbers and some of the best tall tales of his career.

Start with the voice. There is such depth of feeling in the vocals on this album, his ravaged voice as powerful as it has ever been. "Only one thing I did wrong, stayed in Mississippi a day too long." You believe this man has seen terrible and wonderful things. People often say that Dylan can't sing. While he may not be a pretty singer, he is still a supremely gifted singer, able to give subtle meaning to any lyric. There are few who could make their voice work as hard as Bob Dylan. He always worked with what he had, not what he wished he had. "And the emptiness is endless, cold as the clay. You can always come back but you can't come back all the way." No-one could make this line sing as well as Bob and it's not like people haven't tried.

Summer Days soars like a big Blues rocket. It is my favourite Dylan Blues tune. It is a dancer, solidifying his persona as an old time song and dance man. "Well my back's been to the wall so long it seem like it's stuck. Why don't you break my heart one more time just for good luck?" So witty, so on point. I heard Dylan perform this song live twice in concert. It just makes you want to drop all your worthless baggage and get on the floor. "Politician's got on his jogging shoes, he must be running for office, got no time to lose. Sucking the blood out of the genius of generosity. You've been rolling your eyes, you've been teasing me." That Bob won the Nobel Prize for Literature is no surprise with lines like this, up there with any of his great work.

Mississippi is my favourite track on the album. It is a traveling tale. Out on the road. Swinging by a dive bar. Throwing back too many whiskeys. Nothing left in the tank. Spending the night with a woman who you used to love. Dylan recorded Mississippi originally for the album Time Out of Mind. This version appears on the excellent Bootleg Series Tell Tale Signs. While I have a lot of good things to say about Dylan's work with Daniel Lanois - working together on two albums, Oh Mercy and the Grammy Award winning Time Out of Mind - I think the Jack Frost produced albums are superior in nearly every way. There are no bells and whistles, just good, honest production. Dylan knows how he wants his music to sound and cutting out the middle man was an essential part in the string of amazing albums of the new millennium. "I'm drowning in the poison, got no future, got no past. But my heart is not weary, it's light and it's free. I got nothing but affection for all those who've sailed with me." Stick with me. Stay around for a little longer. It's a love song and it's a paean to an earlier time where being down and out didn't mean you were finished. It's a comeback. It's a Rocky climbing the stairs moment. I'm back and I'm ready to go.

Dylan has had much love in his hearts for Westerns through the years, culminating in recording the soundtrack for the Sam Peckinpah film Pat Garrett and Billy The Kid, in which he also starred. There is much imagery on Love And Theft that seems to originate from this vision of the lawless, hostile land of the Wild West. I always think that High Water (For Charlie Patton) would make a great Western. "High water rising, rising night and day. All the gold and silver been stolen away. Big Joe Turner lookin’ east and west from the dark room of his mind. He made it to Kansas City, Twelfth Street and Vine. Nothin' standing there, high water everywhere." When you watch something like Deadwood, you can imagine this song playing as the heroes and villains go about their heroic and dastardly business. Wilderness. Horses and carts. Getting knock down drunk in a whore house. Working a gold claim. True grit. This is Dylan's America. One of the old time. Po' Boy is another Western tale. This is a sing on the stoop song, looking out on the land. Nature. The big old moon. Working a farm. "My mother was a daughter of a wealthy farmer. My father was a traveling salesman, I never met him. When my mother died, my uncle took me in—he ran a funeral parlor. He did a lot of nice things for me and I won’t forget him."

Those who doubt Dylan's ability to sing sweet should listen to Moonlight. "Won't you meet me out in the moonlight alone?" It's soft, it's sweet, it's full of feeling. Bye and Bye is similarly gifted. "I'm sitting on my watch, so I can be on time. I'm singing love's praises with sugar coating rhyme." Dylan has written some of the best love songs of the 20th Century, and these are right up there. Very few people can get inside the head of the loved and the loveless as well as Dylan, his only real competition being Leonard Cohen and Van Morrison. Dylan can be spiteful and bitter on his songs, as seen on Just Like a Woman, but when he loves you, he really loves you. These are let's get close songs. Slow dancing. A gentle kiss on the cheek.

Sugar Baby closes the album. It ranks up there with other amazing album closers like Sad Eyed Lady of the Lowlands and Where Are You Tonight? (Journey Through Dark Heat). "Your charms have broken many a heart and mine is surely one. You got a way of tearing the world apart. Love, see what you done. Just as sure as we’re living, just as sure as you’re born. Look up, look up—seek your Maker—’fore Gabriel blows his horn. Sugar Baby, get on down the line.You ain’t got no sense, no how. You went years without me, might as well keep going now." This is a song that brings to mind a man on the run, hiding out in a stinking motel. A deal gone wrong. A revolver on the bedside table. Bonnie and Clyde. "There ain't no limit to the amount of trouble women bring." It is a devastating song which has so much wisdom about love, about taking the wrong road in life. Get right with the Lord. Get right with yourself.

There are those who called for Bob Dylan to retire in the late 70s, in the mid 80s, in the mid 90s. If Dylan had retired we would have missed out on so much great work, most of all Love And Theft. The album means a lot to me and is in the number two or three spot on my all time favourite Dylan albums. (Number one being Blood on the Tracks, with Infidels being number two or three.) It has so much to love about it. I love it for how it transports me to another time, a better time that may or may not have actually existed. "Old, young, age don't carry weight. It doesn't matter in the end." Underestimate Bob at your peril. They said he was gone, they said he was down for the count. He wasn't. He's on his feet throwing haymakers. This album is a total knock out. Listen to it, love it.