Why I Love Alan Partridge 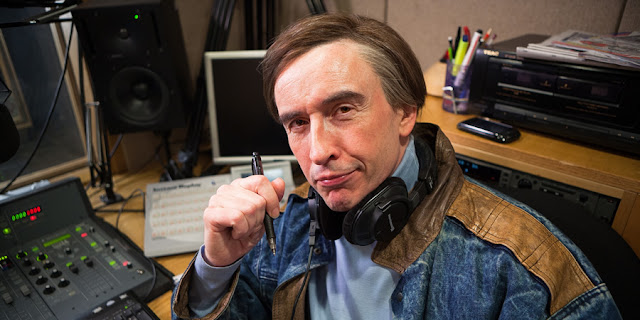 "The torment lasts for hours before I'm thrown into a cold cell and I pick myself up from the straw and filth. Through a hatch comes a tray of food. I paw at it listlessly until I notice that it contains chicken nuggets and what chicken nuggets! These boast all the smoky zing of McCain's southern coating with the tenderest cuts of white meat. The beans are lukewarm but not overcooked, and a generous dollop of smash adds a buttery finish that sets the plate off beautifully. To drink a mug of steaming tea. A really, really good meal."

Almost every night I listen to I Partridge: We Need To Talk About Alan going asleep. If you want to fall asleep laughing, wake up in the middle of the night, start laughing again and fall back asleep with a huge grin on your face, this is the way to do it. Alan Partridge was created by Steve Coogan and Armando Iannucci, with some help from stand up genius Stewart Lee and his partner Richard Herring for the BBC radio show On The Hour, which would turn into the TV show The Day Today. Alan Partridge is, along with Homer Simpson, George Costanza and Frasier Crane, one of the greatest comedy creations of all time.

I'm Alan Partridge is the show that defined what Alan Partridge would come to mean to a world of Partridge lovers. It was, along with work like The Larry Sanders Show, a seminal moment in sculpting modern comedy. While it was technically not a fake documentary, it had the appearance of reality at every turn. It is hard to imagine The Office happening without I'm Alan Partridge. The first series is better than the second, but both are required viewing. There are too many hilarious moments to list, but I will say that Alan's understanding of the U2 song Sunday Bloody Sunday is one of my favourites. "What a great song. It really encapsulates the frustration of a Sunday, doesn't it? You wake up in the morning, you've got to read all the Sunday papers, the kids are running round, you've got to mow the lawn, wash the car, and you think Sunday, bloody Sunday!"

Mid Morning Matters is the best Alan Partridge series. It was originally shown, somewhat bizarrely on the beer company Foster's website. I still don't know why exactly, but it was great to see Partridge return all the same. Mid Morning Matters was then re-edited and shown on Sky. The show takes place entirely within the confines of North Norfolk Digital, previously known as Radio Norwich. It has no laugh track and plays like you are watching the webcam of the radio station. My favourite episode is when Alan gets drunk talking about wine. So funny. Sidekick Simon is a brilliant addition to the show and has some seriously good lines.

Let's talk about the film, because wow is it good. Alpha Papa had a lot riding on it. TV shows into movies are rarely good. They make the mistake that they have to make the movie BIG and lose all of those little subtle comic elements that made the original so good. Well, here Coogan, Iannucci, Peter Baynham - who co-wrote the two classic I'm Alan Partridge series - and Neil and Rob Gibbons, do make the story bigger but crucially don't lose those brilliant little details. This is a film about small details. From the opening that sees Alan Partridge lipsync along to one of his favourite hits in a supremely funny scene, to his reaction to his partner Sidekick Simon saying that Judaism and Islam should merge into Jislam - "Never criticise Muslims, only Christians! And Jews a little bit!" - this is a film that knows its characters and isn't afraid to let them just get on screen and say funny as fuck things. Yes, the setting of a disgruntled ex-DJ taking hostages is a bigger deal than the episodes of the show, but it's big in a small way that still allows for all of the well observed character details to take centre stage. I have two favourite moments from the film, which are first when Alan betrays his friend Pat Farrell to save his own skin, Lynn asks him "Pat's Irish isn't he?" "To be sure." "Why don't you donate £50 to Sinn Fein?" Makes me laugh every damn time. There are few people who are not Irish that get Irish humour but Coogan is one of them.

I love Alan Partridge because in his heart he is a good guy. I know he has many flaws and issues but when you get down to it, he is a man who will do the right thing, even if it's the wrong time to do it. My favourite moment in all of Alan Partridge is when the cop puts a gun to his head and asks him what he wants to say to his children and he replies "they don't talk to me. Yeah ask them why they don't talk to me. So yeah just tell them I love them." The acting job here is quite extraordinary. Coogan manages to get both a huge laugh and move you nearly to tears, with the expression on his face. He loves his kids as best as he is able to. He makes mistakes but his heart is good. Alan Partridge is us at our most pompous and prejudiced. He is us when we speak without thinking or when our fears get the better of us. He is a character that will live for as long as there is comedy.