Why I Love Planes, Trains and Automobiles 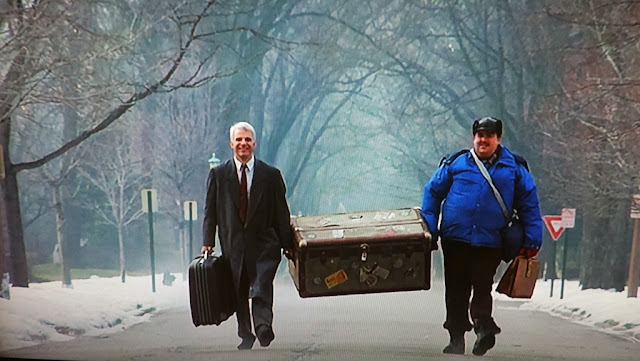 "You wanna hurt me? Go right ahead if it makes you feel any better. I'm an easy target. Yeah, you're right, I talk too much. I also listen too much. I could be a cold-hearted cynic like you... but I don't like to hurt people's feelings. Well, you think what you want about me; I'm not changing. I like... I like me. My wife likes me. My customers like me. 'Cause I'm the real article. What you see is what you get."

Planes, Trains and Automobiles is a movie that I first saw when I was very young. It left an imprint on my person, like no movie before it or after it. I remember getting my first creative urges after watching this movie. I am pretty sure too that, along with Michael Jackson, it helped to shape my love of music, particularly ambient electronic from the scene where Del defends himself from Neal's cruel verbal assault. This was produced by The Dream Academy who also performed the beautiful instrumental version of Please, Please, Please Let Me Get What I Want from Ferris Bueller's Day Off. Planes, Trains and Automobiles is a comedy with heart. It gets huge laughs, but also moves you like a motherfucker.

John Hughes was some kind of genius. Not in the grand, I'm fucking Mozart way, but in the way of being able to translate all manner of human experience onto the screen. Of course many people will remember him for his teen movies like Sixteen Candles, The Breakfast Club and Ferris Bueller's Day Off, but with Planes, Trains and Automobiles he solidified himself as an artist who could tackle any age with verve and insight. Hughe's wrote the first sixty pages of the script for Planes, Trains and Automobiles in six hours. Yes, SIX FUCKING HOURS. Jesus Christ.

Planes, Trains and Automobiles is about the hell of getting home through bad weather, broken down trains and how you never quite know who is going to come into your life and change it. Neal Page is a marketing guy. He is irritable and sarcastic. While attempting to get a cab during rush hour, Neal bumps into Del Griffith, who inadvertently steals Neal's cab. Del is a kind hearted but invasive sort who won't stop talking. He sells shower curtain rings. Every time I watch the movie, I think this is the perfect damn job for Del to do. It is a humble profession, where as Neal's is frequently condescending and pretentious. Through being thrown together, first on the plane and then when Del offers to get Neal a hotel room, this unlikely pair must wrestle with their differences and try to come to terms with the fact that fate seems to have decided that they must become friends.

Becoming friends and the process that Del and Neal go through is the heart of the movie. It is about becoming a better person and learning how to not let your prejudices stop you from understanding another human being. The scenes that hit hardest in the movie are those that explore the differences between Del and Neal, and those in which Del is put down by Neal. The first such scene in the motel room, where Neal eviscerates Del for all manner of impolite and inconsiderate behaviour is the one that tells you that this isn't just some silly comedy film. Its characters are sharply drawn, and have real depth to them. Their motivations are human, and the hilarious situations they become embroiled in come from a believable place.

Planes, Trains and Automobiles delivers some huge laughs. My favourite is obviously Steve Martin's sweary rant. "Welcome to Marathon, may I help you? "Yes." "How may I help you?" "You can start by wiping that fucking dumb-ass smile off your rosey, fucking, cheeks! And you can give me a fucking automobile: a fucking Datsun, a fucking Toyota, a fucking Mustang, a fucking Buick! Four fucking wheels and a seat!" "I really don't care for the way you're speaking to me." "And I really don't care for the way your company left me in the middle of fucking nowhere with fucking keys to a fucking car that isn't fucking there. And I really didn't care to fucking walk, down a fucking highway, and across a fucking runway to get back here to have you smile in my fucking face. I want a fucking car RIGHT FUCKING NOW!" "May I see your rental agreement?" "I threw it away." "Oh boy." "Oh boy, what?" "You're fucked!" Has the word fuck ever been used so well and so plentifully? I don't think so! This is the only reason that the film was rated 15 in the UK and Ireland and R in the US. But seriously if you stop your kids from watching this film, I don't know what to say to you. You are robbing them of one of the truly great comedy films of the 20th Century. Other great moments include "Where's your other hand?" "Between two pillows." "Those aren't pillows!" Shout out to Michael McKean for the scene with the state trooper. John Candy's straight talking attempt to let them continue in a car that has no functioning gauges and no roof is damn funny.

The ending is my favourite of any film. The image of Del and Neal sharing the weight of the case is everything beautiful and touching about this movie. Two people who thought they had nothing in common become the best of friends. "I'm a little wiser too." I love films where people grow. Planes, Trains and Automobiles has a lot of lessons to teach but it does so in such an amusing and entertaining way that you don't even really know that you are, like the characters, developing an emotional maturity that will let you treat people you love better. John Candy and Steve Martin deliver the best performances of their careers, and John Hughes directs and writes his best picture ever. The performances are so on point and precise and the characters are so sharply drawn that you never lose the sense that these are real, breathing people. Candy in particular delivers on the hardest part in the movie. He makes you love Del, even while making it clear why Neal would be severely pissed off by him. To love Del is to love this movie.

Planes, Trains and Automobiles is probably my favourite film ever, neck and neck with Lost in Translation, and depending on the day beating it out for my top spot. I have many happy memories watching the film with my mother, father and brother. It shaped my sense of humour - I remember delivering the fucking speech in school and getting big laughs - and it shaped my love for heartfelt, uncynical Art. That's the thing: there is zero cynicism in the movie. It is a perfect Thanksgiving and Christmas film. It is an opportunity to reach out to your brothers and sisters and offer them a helping hand. Watch it, laugh yourself silly and have a huge smile on your face at the end.