Why I Love Prometheus 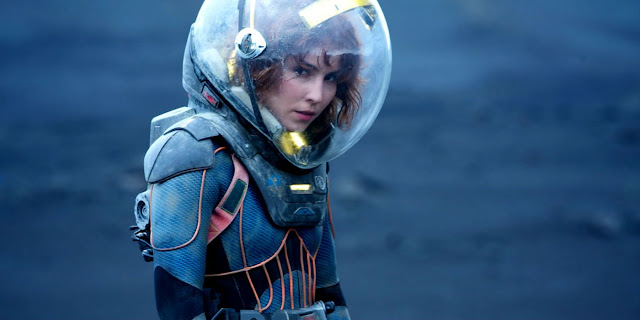 "Final report of the vessel Prometheus. The ship and her entire crew are gone. If you're receiving this transmission, make no attempt to come to its point of origin. There is only death here now, and I'm leaving it behind. It is New Year's Day, the year of our Lord, 2094. My name is Elizabeth Shaw, the last survivor of the Prometheus. And I am still searching."

Prometheus is my favourite film of 2012, and on my top ten of all time favourite Science Fictions. Roger Ebert got it right when he said that while, yes it has problems, I don't care about them. So compelling is the story of Elizabeth Shaw, David and the crew of Prometheus that the little flaws don't matter. Prometheus is a film of the same lineage as Blade Runner and Alien. Particularly so with Blade Runner, where it follows up on the themes of creators vs created extremely well. I am not a theist. I am an atheist. But I do believe in Art that deals with spiritual and supernatural happenings as being of prime importance to our human experience. And I am open to the possibility that we are not the only ones on this island, to use a Lindelofly phrase. It would be insular and solipsistic to believe that we are the only important life forms in the whole stretch of the universe. Prometheus deals with this incredibly well.

Thank Damon Lindelof for this. Lindelof gets a lot of shit from people who are still confused about Lost - it is a sublime show, flaws and all - and he got some guff for his work on Prometheus. People wanted someone to blame for the fact that the film was not what they expected. Or for the standard Horror trope of curiosity killing the cat. A quick watch of the original Alien, and you will see plenty of behaviour that is not smart or realistic, but yet that film gets a pass because the whole is far greater than its parts. I make the same argument for Prometheus, a film which combines the best body horror with a truly transcendent, beautiful and touching story about a woman searching for her purpose in a vast, callous universe.

Prometheus tells the story of Elizabeth Shaw, a believer in the theory that humanity was created by a higher being, not through some natural process. She is a Christian, and when I first noticed her cross, I got a sick feeling in my stomach. "Oh no," I thought, "Here we go on a big old religious fluffing fest." I was surprised then that I was moved tremendously by her plight and her desire to keep searching. Check the quote above for some surprising and gorgeous Gene Rodenberry style Science Fiction spirituality. Shaw's battle is as much with herself as it is with her other crew mates, and higher ups who want to discover humanity's creators to personally gain from their knowledge to prolong and create life. I am reminded of the line from Blade Runner "You were made as well as we could make you." "But not to last." "The light that burns twice as bright burns half as long, and you have burned so very, very brightly, Roy."

I relate to Elizabeth Shaw because like her, I feel I am also searching. With the recent death of my father, I have become open to the possibility that there is more life after life, or at least that our brains' potential is far more than what we are used to and that we are more than our consciousness in day to day reality. Like, if I am able to conjure up my dead father in intricate details that I have no conscious awareness of, then that's almost as good as there being a benevolent God. I believe that Shaw is, religion or not, one of the great spiritually compelling characters in modern cinema. I did make the mistake of thinking that my mother would love Prometheus, because of this spiritual journey, but I did not factor in how harsh the film would appear to those uninitiated in the ways of Body Horror.

Prometheus has a lot to say about life, about the battle between Gods and Humanity, Creators vs The Created. Through some amazingly visceral Body Horror, Shaw endures and comes out the other end stronger than ever. I was very disappointed that Prometheus didn't receive a sequel that it deserved. Instead we got Alien: Covenant, which while very good in its own right was not as beautiful or as inspiring as the movie it followed. I really wanted to see Shaw go to the home world and discover what made the Engineers do what they did to their creations. I mean I *think* I know, but it would have been really cool to see Elizabeth discover it for herself. I think this rejigging of the story was down to the snarky, cynical response that Prometheus inspired in some. While it may appear to be an Alien prequel, really it's a unique and individual play on the themes and ideas that made those movies so special.

So what about its flaws? Well, the dialogue isn't great. It doesn't have any of the snap or wit of Alien or the cool Neo-Noir vibe of Blade Runner. I am not going to bother getting into plot holes, because plot hole critics are the scum of the Earth, but I will say that nothing happens that isn't backed up in a big way by the movie's themes and commitment to examining the curious relationship that we all have to religion and spirituality, whether we believe personally or not. "But why didn't she just run sideways?" Because it looked really fucking cool. Sometimes that's enough. Her character was also blinded to the true reason of the search for the Engineers. She had no moral compass or soul. It is not inappropriate that she be killed by her inability to see what was right behind her. I did not find the film confusing in the least, or that it was being intentionally abstruse. I found the film to be an intriguing mystery and one that I still savour today, some five years after I first saw the movie. It is the equal of Alien or Blade Runner and deserves to be held up as a landmark Science Fiction of the new Millennium. It is easily on the level of Moon or Her as sublime and extraordinarily emotional Science Fiction.