Why I Love Sunset Boulevard 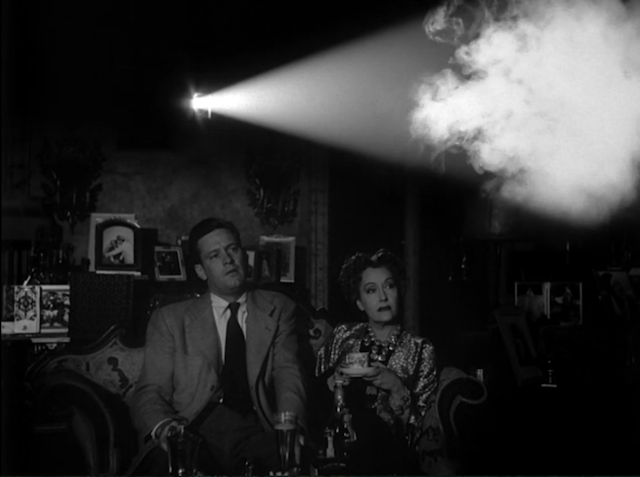 "I am big! It's the pictures that got small!"

Sunset Boulevard, directed by Billy Wilder, is probably the single greatest Noir film ever produced. I didn't include it in Why I Love Noir because it demands its own article. It is a film about obsession, about lost youth and the corrosive effect of fame. It is also a film about films. Along side Singin' In The Rain and Ed Wood, it is among the best films about the creative process of making a movie that has seen lights dimmed and projectors switched on. Sunset Boulevard was released in 1950. Its resonance and power has never faded. What it has to say about fame is far more true today than it was in 1950.

Sunset Boulevard is a story about the death of Joe Gillis. Don't worry I'm not spoiling anything: he's dead in the opening of the picture. (A small piece of trivia: what do American Beauty and Sunset Boulevard have in common? Answer: they are both narrated by a dead man.) Joe Gillis is a failed screenwriter, in desperate need of cash to pay off his car. Hiding from the men in search of Gillis to repossess his car, he conceals the car in an old house he thinks is abandoned. He discovers that a fading movie star, Norma Desmond lives in the house. Norma Desmond has written a script for her comeback, and after Gillis does some political maneuvering, he is hired to clean the script up for use in a movie. It doesn't matter that the script is awful, it's a paying job and he needs the money.

Sunset Boulevard has some interesting things to say about fame, the most important being how it can corrupt and destroy even good people. I know, that may seem obvious to you, but the way in which Wilder and co-writer Charles Brackett write it makes you feel as if you are hearing this fact for the first time. When Cecil B. DeMille speaks about Norma Desmond, he says that she was only trouble in later years, when fame had made her believe in her own bullshit. When you experience Gloria Swanson's performance, every little detail is devastatingly on point. Her need to be loved, to be adored, by someone may appear at first glance pathetic, but once you get deeper into the movie you feel a great sense of empathy for her character. It is a terribly bleak film, with a complete absence of a happy ending. It is perhaps the greatest ending to any movie, as the lights return for Norma Desmond, only now they are from the press who have discovered that she has murdered her lover Joe Gillis. Never have I seen a descent into complete madness done more compellingly. She is living in her fantasy now, and she has no need, any longer for the real world.

One of the elements of the film that I think is most interesting is for what it says about those who live on other people's money. I don't know whether this can be attributed directly to the gender of the characters or not - I don't like to believe that Billy Wilder was saying any man who lives off a woman is scum - but I do believe that with these characters, it is seen to be parasitic and verging on a great evil. He gladly takes every bit of money from her, because he can't support himself and yet doesn't show all that much gratitude or love for her. Once his life turns around, he is ready to discard her as if she was nothing to him. I found this element to be the most challenging and compelling in the movie. Yes, she kills him, but his leaving would have killed her anyway. Yes, she manipulates him, but he is more than happy to be her lover as long as she is paying the bills.

Sunset Boulevard is unusual in the movies about movies category for how destructive and insidious movies can be, for those behind and in front of the camera, and for those in the audience. A movie may just be a well produced delusion, after all. The need to escape is seen as a sign of weakness, of disconnect with reality, of a dreadful moral failing. Norma Desmond needs to escape from her life of luxury, for what reason exactly? Doesn't she have everything that anyone could reasonably require? She needs to get away from her life, because she needs to get away from herself. She is a vessel, in which other identities are placed. These identities give her an importance that, no matter how hard she tries, she can't get in her day to day life. It is no coincidence that she wants to see herself as a Queen like Salome. If she can embody these roles, she can become them for a time and leave behind her lonely, pointless life.

Interestingly, Sunset Boulevard is one of David Lynch's favourite movies. He named the character Gordon Cole from Twin Peaks after Gordon Cole who calls up Norma Desmond's house, supposedly to ask her to star in a movie but in reality to ask to rent her old car. Sunset Boulevard was brilliantly featured in episode 16 of the new Twin Peaks when Dougie Coop heard the name Gordon Cole and proceeded to jolt himself awake through an electrical outlet. Such a beautiful, funny moment.

Sunset Boulevard is the greatest Noir because of the depth of the characters, the incredibly atmospheric visuals crafted by Billy Wilder and cinematographer John F. Seitz, and the absolutely knock out performances from Gloria Swanson, William Holden and Erich von Stroheim as Max. It has a lot to say about movies, about fame and about men and women. It is a sad story, but also one that has its share of darkly humorous moments, such as the scene with the dead monkey. Anyone who doesn't think of Michael Jackson when that happened is a damnable liar! I close with the words to the song Old Money by Lana Del Rey which expresses so much of why Sunset Boulevard is a classic, destined to entrance and entertain generations of humans.