Why I Love Christopher Hitchens 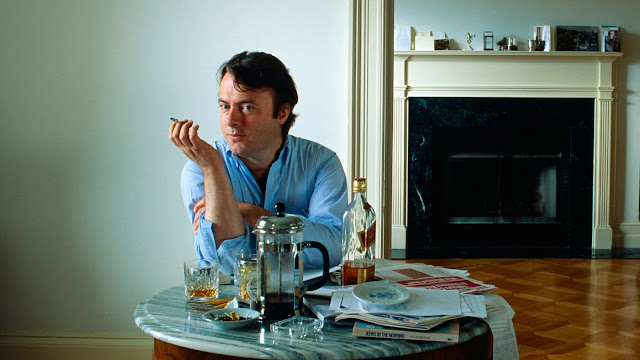 “What is it you most dislike? Stupidity, especially in its nastiest forms of racism and superstition.”

Christopher Hitchens is a hero of mine. I first discovered him through Bill Maher's Real Time show on HBO. I was working at Citibank at the time as a security guard - I know - and I used to spend my many hours watching Maher's show and becoming educated in better people than me. When I saw Hitch first, I couldn't believe that someone like him could exist in the world. Here he was saying things I had long thought about but had never verbalized. He stood up to bullies in all their forms, and held that religion could be a great evil, that it was perhaps even built to be evil from the ground up. To understand why a guy like me would react so passionately to Hitch, you need to understand our history in Ireland with religion. It has long divided and controlled us. The Catholic Church is responsible for unforgivable crimes against the people of Ireland, and many other places too. Our education system is set up to facilitate indoctrination into Christianity, specifically the Catholic variation of that belief system.

Hitch was always eloquent, even when he was wrong. I will never forget being introduced to his views on Iraq and thinking that he was the very first person I had ever heard that actually made you think that maybe it wasn't a bad idea. He believed in universal human rights and stood up for marginalized and discriminated against groups and minorities. He had no time for racists, and often excoriated them in debate. As an atheist, and as an opponent to religious crimes against human dignity and universal equality, I found much hope and insight in Hitch's words. God is Not Great is a book that should be read by everyone, especially those who blindly follow a religious path without considering the ways in which religion can damage us as a society, and particularly when the very teachings themselves incite hatred and acts of great immorality.

Christopher Hitchens was the greatest debater I ever saw. He destroyed his opponents in shocking, hilarious and always on point ways. His greatest moment came when he and Stephen Fry debated the question of whether the Catholic Church was a force for good. Fry is very good here, but Hitch is just stunning. "For condemning my friend Stephen Fry, for his nature. For saying you couldn't be a member of our church, you're born in sin! There's a revolting piece of casuistry that's sometimes offered on this point. "Yeah we hate the sin only, we love the sinner." Stephen is, I'm sorry to say, not quite like other girls. It's his nature. Actually he is like other girls in that he's when I last checked, absolutely boy mad. He's not being condemned for what he does, he's being condemned for what he is. You're a child made in the image of God. Oh no you're not! You're a faggot. And you can't join your church and you can't go to heaven. This is disgraceful. It's inhuman, it's obscene and it comes from a clutch of hysterical, sinister virgins who've already betrayed their charge in their children of their own church. For shame! For shame!" I include the full debate below. Please watch it and have a think on the issues it raises.


Hitch was an amazing writer and I own most of his books, which are unfortunately and irritatingly in storage. My favourite is Letters To a Young Contrarian. I wish I could find the quote where he discusses why racist humour is so insidious and obnoxious, but trust me if you purchase the book you will not be disappointed! He always stood up to bullies, and taught me a lot about having respect for yourself, even in the middle of seemingly overpowering opposition. To be in opposition is a calling. To be a person who doesn't accept religion as the only outfit with morality on their side is holy.

I feel one reason why I love Christopher Hitchens so much is, not only his insight and incredible wit, but because of his ability to personify so perfectly a man who is absolutely himself and who is able to educate and inspire other men to be as morally upstanding and fearless as he was. When Hitch got cancer, it foreshadowed my own experience with my father. I felt like I was losing a parent before I actually lost a parent. Hitch stood up to bullies, and so did my father. My father taught me how to be a man who stood up straight and took on injustice head one. I sometimes dream about Hitch and he tells me to keep going, and to keep up the good fight.

I think on his advice to keep away from cliches, which shames me as I love a good cliche. Not that many people know it but Roger Ebert was a big fan of Hitch. When Hitch got cancer, I sent a link to an interview with Hitch to Roger. He responded to me and thanked me. That's the internet for you! Nothing has ever brought our heroes to our homes, in a way like the internet. Roger wrote this wonderful article afterwards. I was honoured to have played a part in the work of someone I admired so much. Speaking of the internet, I did actually have an email from Hitch after he was attacked by fascists in Beirut after defacing a poster of the Syrian Socialist National Party. I wish I still had the email, but it lifts my heart to think that me and Hitch had some kind of contact.

Christopher Hitchens died a brave man, who never faltered from his long held beliefs in universal human rights, or for free inquiry and freedom of speech. Everything I now hold about freedom of speech comes from Hitch. Freedom of speech should be prized by all who think they may some day need to state things that are not popular or politically correct. Censorship is great, up until the point it stops you from saying something you need to say. I feel he would be supporting the athletes who are protesting systemic, institutional racism today and he would be tearing Trump apart for being the bigot and racist and preening narcissist that he is. We could use Hitch today.

Hitch was a hero of mine and someone who I will never forget, or get uncomfortable for liking. He never backed down from a challenge or a claim that he was a hypocrite. He always came out the victor in his debates, not just because he almost always had right on his side, but also because he was the most gifted debater of his generation and perhaps of modern times. If you haven't read his books, especially God is Not Great, please do so. He is someone who will inspire and infuriate in equal measure, but he will in doing so make you better at what you do and make you less lazy and less complacent. Stand up and be counted. That's what Hitch would want. Thank you sir, you made me who I am today.