Why I Love Frasier 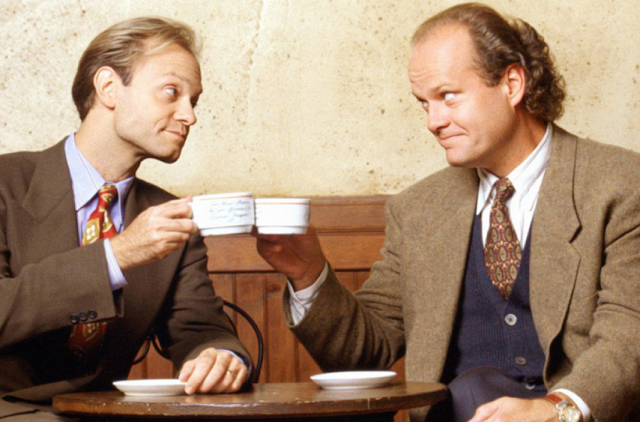 "Niles? Do you think I'm elitist?" "Of course I do. You needn't worry about that." "No, not in the good way. At work today, I discovered an injurious graffito about me. Scrawled on the men's room wall." "No!" "Yes. Quote: There once was a man, Frasier Crane, Who says he can feel your pain. But he acts like a snob, to the guys at his job, and I think he's totally lame."

Frasier is my favourite comedy show ever shown on television. I'm not saying it's the best, hands down. There is some fierce competition for that spot including Cheers, Seinfeld, The Larry Sanders Show, Curb Your Enthusiasm and of course perhaps the greatest show ever on TV, The Simpsons. It is however my favourite. Frasier is proof that you don't need to be cynical to be funny. Frasier is a show with a huge measure of heart. You care about the characters, no matter what they are going through. While the show isn't cynical in its heart, as say Seinfeld is, that doesn't mean that it isn't sharp as fuck and full of wit. Frasier had some of the best writers in comedy, leading with show runner Christopher Lloyd. It is remarkable that a spin-off of the legendary Cheers, could not only live up to its predecessor but in many respects surpass it.

Frasier Crane was a character on Cheers from its third season through to its eleventh and final season. He was introduced as Diane's new boyfriend, whom she met while staying in a mental health facility. He is arguably the best character in the history of Cheers, mixing a extremely witty style with an ability to deliver performances that were as heartfelt and meaningful as anything on television. The introduction of Frasier to Cheers was I think responsible for diminishing Diane's role. Where as before she would have gotten the smartest and best lines to deliver to the dullards around her, she was now relegated to playing second fiddle to her new boyfriend. I don't think this was intentional, but it is something that likely influenced Shelly Long's decision to leave the show in season five.

Frasier's specialty is of course delivering seriously smart bon mots, but as already mentioned, Kelsey Grammer is supremely talented when it comes to dramatic, romantic scenes. This is why Frasier is built around the belief that you can both make people care and love the characters and also be the funniest show on television. The cast isn't as big as Cheers, focusing mostly on five characters, Frasier, his brother Niles, his father Martin, Daphne, Martin's live in physical therapist and Roz, Frasier's radio producer. The way these characters interact is always full of heart and chuckles. Each actor is pretty much the best at what they're asked to do.

Martin Crane is played by John Mahoney, in surely the best role of his career. He is at once unique in the family, with neither Frasier or Niles taking after him, while also being a great father and someone who his sons got their strong moral center from. Some of the best episodes of the show come out of the relationship the Crane brothers have with their father. I am reminded of the RDWRER episode and Breaking The Ice as being two of the best. Really sweet, genuine emotion and still maintaining the humour. This is a good time to express that while I love Seinfeld - an article is upcoming - I think it is a mistake to think that a show must be cynical in order to get laughs. Cheers managed quite well doing both at the same time, and Frasier shows exactly why it is silly and simplistic to think that heart kills laughs. I am reminded of Josh Weinstein's words in a Simpsons commentary where he says that if you are invested emotionally in the characters, you will like the jokes better. Frasier proves that.

My favourite Frasier episodes are those which see Frasier and Niles get together and make a scheme to get more popular, or to achieve some great honour. When they start the restaurant together, when they collaborate on a book, when they hold a dinner at Maris' beach house and have to dispose of a dead seal. These are some of the best episodes in anything, ever. They are so damn funny, and filled with keenly observed nuances about the pomposity and ravenous need for social advancement the two brothers share. Yet, you also can't help but root for them, even as everything predictably and wonderfully falls apart.

Some words must be spent on discussing the heart of the show, and its one story arc that lasts the entire eleven seasons: Daphne and Niles. I have never been more enamored with a romantic plot in a show, ever. Not with Diane and Sam, and not with Rachel and Ross. Hell not even with Homer and Marge. The build lasted for seven years, paying off spectacularly well in the season seven finale. Anyone who has ever loved another, who didn't know or didn't pay you any attention relates to Niles and Daphne. When they finally do get together, it is so powerful that it knocks you over. In case you didn't know David Hyde Pierce is a gay man. And you never once doubt, not ever, that he doesn't love Daphne with all of his heart. This is called acting ladies and gentlemen. Never again can we hear the bullshit about being the wrong sexuality or gender or race to play a role. If the actor is good enough, they can make you believe anything.

Frasier didn't unfortunately have eleven seasons of quality. There was a noticeable dip from season eight, but the show did rebound to close to its former glory when Christopher Lloyd returned as showrunner in the show's final season. This can be explained by the absence of Lloyd from eight to ten, but it is also likely a result of finally pulling the pin on the Daphne and Niles relationship and not really knowing where to go afterwards, now that such an integral part of the show was now absent. Even with this dip however, Frasier was so good for so long that it almost doesn't matter. It certainly doesn't diminish the show's quality.

Frasier is something that I would watch every single day if I could. I must get a hold of the complete box set and have another watch of it soon. It is one of the pinnacles of comedy writing and can hold its own against any peer. It genuinely did make me laugh and make me cry. There are some truly spectacular episodes in the show, that you must seek out for yourself and watch. I have mentioned some above to get you started. Sherry, Niles?