Why I Love It Follows 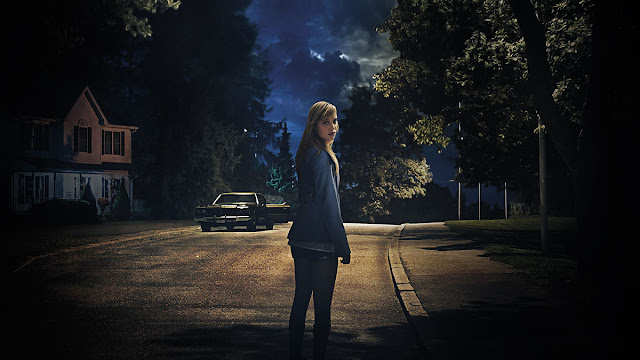 "It could look like someone you know or it could be a stranger in a crowd. Whatever helps it get close to you."

Good Horror frequently starts with rules. Think of Scream. If you answer these trivia questions, I won't butcher you and hang you from your intestines. Or The Exorcist. You drive the Devil out in these ways, and no others. It Follows has perhaps the best rules of any Horror movie I've seen. The slow, impending death comes after you've had sex with someone who's been infected. This makes you "it" and you are engaged after in a perverse game of tag. If "it" touches you, you die. And worse. It Follows is my pick for one of the smartest, most creative and interesting Horror movies of the last decade. I am ashamed it took me so long to see. It has everything I love in Horror: a gorgeous visual design, a stunning soundtrack and tension that is ramped up and up until breaking point. I am reminded of the David Cronenberg movie Shivers, for how the film plays with the dangers of sexual engagements, and how good people lose their minds when presented with temptation.

I am unsure if there is any deep meaning to It Follows, beyond being a supremely effective Horror movie but I have an inkling there is. Someone better than me could probably express better why it is that the movie resonates so much with a modern audience. Sex is frequently seen as an evil in Horror movies, no matter how necessary it is. It Follows is not however overtly moralistic in its approach. Yeah, it's transmitted sexually but it's seen more as a force of nature. Sex is a fact of life and it can't and shouldn't be avoided just because there are terrifying things out there. It is not mentioned if a condom would prevent "It" from attaching itself to you, which is a sign that this isn't merely a cautionary tale, but something deeper, connected to our physical longings that result from lust and sometimes, hopefully from love. That love makes us vulnerable to a lot of bad things, but we need to keep on searching for it, because it is what drives us in our lives.

It Follows tells the story of Jay, a woman who catches the worst kind of sexually transmitted disease. It Follows is a masterful Horror, something that takes a wonderful, innovative concept and plays it out for all its worth. By the end of the movie, you are emotionally spent, so tense and savage is the journey. It Follows has so many great set-pieces that it makes it hard to point to one in particular: they all flow naturally and occur one after another, giving the viewer little time to re-orientate themselves. Alfred Hitchcock said "There is no terror in the bang, only the anticipation of it." This is mostly true, though I must say that when you see with your own eyes what "It" does to its victims, you are doubly freaked out. Sucking all of the life from its young victims, feeding on their souls. This is a brilliant trick: to take all that anticipation and make the actual bang scarier than anything you have seen before. Very few Horror movies can do this. The Exorcist is one. The House of the Devil is another. But they are few and far between.

It Follows is smart for how it presents a terrifying situation and lets the characters be smarter than the audience. There is no need for the "idiot plot" as discussed frequently by Roger Ebert. Here the characters do everything that you could reasonably expect them to do. It reminds me of the best Slasher film ever made, Hush. Both movies have a real feeling for the genre and know how to avoid the annoying bits and pieces that ruin otherwise enjoyable movies. Here the characters make all the right choices and yet "It" keeps on coming. It reminds me of the original Terminator, in the relentlessness of the pursuit.

The performances are really very good, expressing well the terror of not knowing when "It" will come around the next corner. Particular shout out to the lead Maika Monroe who plays the fear so real, and so understandable. I related a lot to this story's paranoia and seeing enemies at every point, no matter what the people around me see. The feeling of being watched and stalked is something I can really say I have felt in my life. It is a terrible feeling, made all the worse because not everyone will believe your story when you tell it to them. I found it somewhat coincidental and personally ironic that the love interest of Jay is named Paul. I have found myself in that position of loving someone who doesn't love me, all too many times. I found the ending of the movie, where they walk down the street very touching. That hand holding is in its way, more meaningful than a thousand sexual adventures. In spite of the fear and terror the situation creates for our characters, they still hold that love is the answer. It's a really beautiful sentiment.

It Follows is then a brilliant, devastating and supremely terrifying movie. It is among the very best of the last decade and should be watched by anyone who wants something a bit smarter, a bit better than so much of the output in the genre. "I'm just saying you could do better. Tell me have you heard that lately?" Shout out to the director and writer David Robert Mitchell for crafting such an entrancing, seductive and beautiful movie. It Follows will live on in a way similar to John Carpenter's The Thing, as a masterpiece of tone, atmosphere and sheer bloody minded terror. Well done everyone on this movie!