Why I Love Scenes From The Class Struggle in Springfield 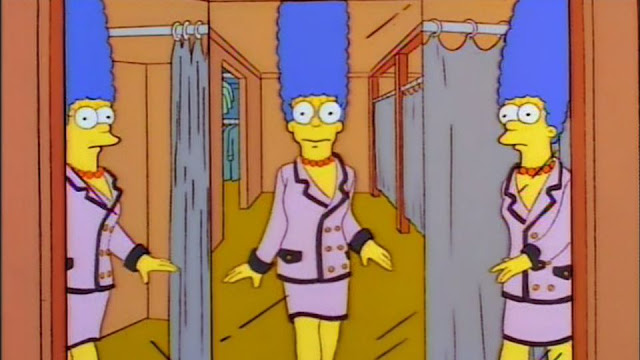 "Automotive skills and fashion sense. Well, you've come a long way from the girl I knew nothing about in high school." "We ran with our different crowds. You had your debutante balls and... skinny-dipping, and I had my... home shoe repair course."

Season 7 and 8 are two of the best seasons in the history of The Simpsons. Thank showrunners Bill Oakley and Josh Weinstein for crafting two seasons which rival the very best of the show. They were both supremely qualified to bring heart and hilarious jokes to The Simpsons. They understood that to truly believe in the story being told you needed to feel for the characters. Their belief that Homer should be, as Bill Oakley put it, a regular dumb guy, and not the most famous man on Earth or a food monster, led to some of the greatest episodes in history.

My favourite episode from their tenure on the show is Scenes From The Class Struggle in Springfield. This may surprise you, as it is an episode that is not a Bart or Homer episode, but a Marge episode. Written by Jennifer Crittenden, who you may know from her work on Seinfeld, as well as The Simpsons, Scenes From The Class Struggle in Springfield is an emotionally based episode that gives Marge perhaps the most emotional complexity of any episode. The episode was directed by my favourite animator from The Simpsons, Susie Dietter, who makes Marge look as good as the story demands. This is a very well observed episode about, as Susie Dietter puts it, women trying to fit in with other women and you can tell that two women were largely responsible for the story and its execution.

Scenes is an episode that tells a story rarely seen in television, and indeed, The Simpsons. It gives time and energy to depicting a certain kind of desperation that is moving as all hell, as well as being hilarious and full of heart. The scenes with Marge at the sewing machine are my favourite in the episode, as she desperately tries to pass as one of the upper class. She desires something that she has never had, that feeling of being accepted by the popular and wealthy crowd. The quote above is my favourite from the episode - along with Homer's insistence that lowering your score in golf is only one way to cheat in the sport - and expresses so well the feeling so many of us had when we have tried to infiltrate those social groups that are forever out of reach.

I feel a lot of sympathy for Marge in this episode. She deserves to have something special in her life, so selfless and caring is she towards her family, and I feel her upset at her family not quite understanding why she wants this. The ending is a beautiful thing, where Marge accepts who she is and not who she wants to be. The final scene in Krusty Burger is sweet, touching and very funny. Here's the thing: it's relatively easy to fill a show with good jokes, if you have a room full of funny people. It's much, much harder to make you actually give a shit about what happens to the characters. To do that you need the touch, and everyone involved in the episode have the touch. As David Mirkin says on several commentaries, the secret to The Simpsons is that it admits up front that everyone is messed up and flawed. But that's okay. If you accept who you are and love the people who matter to you, you can get through anything. The realization of Marge that she is content to spend her life, not hobnobbing with the swells, but eating delicious fast food with her loved ones, is earned at every point. Her family want to do this for her, and they are willing to be completely unlike themselves to let her get what she wants. It is Marge who, true to form, sacrifices her longing to be seen as stylish, beautiful and part of the popular crowd. "For what does it profit a man to gain the whole world and forfeit his soul?"

A few words need to be spent on the B-Story, because it is incredibly funny. Bill Oakley said that one thing they thought would be interesting would be if Homer was good at something. He is a natural golfer, and the scenes between him and Burns are some of my all time favourites. That welcome cake baked by Burns... "I pickled the figs myself." BIG TIME LAUGHTER PEOPLE! It is always a great thing when Homer is goal orientated and passionate about something. I'm thinking of King Size Homer, and The Wizard of Evergreen Terrace, here. Homer has been made a few times throughout the show, something grotesque, and something that is fairly repugnant. Homer is the hero of the show, and while he is not always the most enlightened person, he does have a good heart. That should always come through. I love his willingness to help Marge here, and how he knows that he must support her as long as she wants what she wants.

While I have written before about why I love The Simpsons, and have said that my favourite showrunners are Al Jean and Mike Reiss, Bill Oakley and Josh Weinstein are very close. They understand so well the secret to the show, that zany gags will only take you so far, and that to truly invest in a show, you need to feel for the characters and care about what happens to them. I could do a dozen articles about their shows, and hell I may well do that, but for the time being let me just say that I don't think anyone took the responsibility of steering The Simpsons ship so seriously as Bill and Josh. They are my favourite commentaries to listen to on the DVDs, as they are always hilarious, full of insight and come across as genuinely nice people. They preserved the soul of the show, its immense heart, and yet still managed to make it some of the funniest it had ever been. This is supremely difficult people! While I have laughed on occasion at something like Family Guy, I never really gave a shit about what happened to the characters. Even a great show like Seinfeld could be heartless and cynical at times. This is what separates The Simpsons from other shows. The characters have hopes and dreams and they care about things. That makes you care. Thank you Bill, Josh, Susie and Jennifer for making such a damn good episode.