Why I Love The Twin Peaks Finale 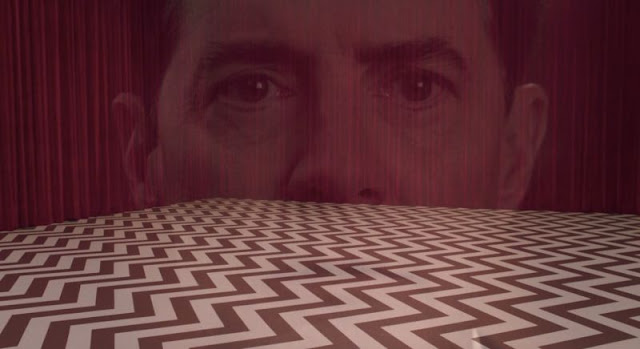 "We live inside a dream."

Let's start with the obvious complaint about the Twin Peaks finale: it didn't answer enough questions. Well, leaving aside that it did in fact clarify a lot of things, let's face this complaint head on. The answers crowd have plagued many a TV show and are responsible for the cancellation of the original Twin Peaks all those years ago. They were a common feature throughout the run of Lost, and were never less than supremely annoying, full of weird entitlement and an inability to deal with anything that wasn't explained in very clear English. This is where the complaint of a show like Twin Peaks being self-indulgent comes from. The inability to understand instinctual Art is a curse, and while many of us have some sympathy for the literally minded soul, we must remember that it is in most cases a curse of these people's own making. The Twin Peaks finale was as far from a "fuck you" to the fans as it is possible to be. It was terrifying, mystifying and beautiful beyond measure. I will try to express why I feel this way, and why I believe that the veneration of mystery is something we should all hold as a Holy calling.

Some people are upset at the notion that parts of Twin Peaks may be considered at least in part, existing inside a dream. This, they say, invalidates the story and makes the show something of a con. I find it extremely difficult to understand how anyone who has even a cursory knowledge of David Lynch could come to the belief that dreams in his films are less real than those existing in the "real world". Dreams are where we exist apart from the physical realities of day to day life. In dreams, we experience our deepest fears and our deepest hopes. We express our love for those special people in our lives, some of whom we can never truly express this love to in person. Take David Lynch's Dream Trilogy: The Lost Highway, Mulholland Drive and INLAND EMPIRE and understand that to Lynch the dream is just as real as anything else. The Black Lodge is in so many ways a representation of the worst nightmares that plague us as living breathing human beings. To exist in this reality, we must let go of our need to understand things in a literal manner, and embrace instead the logic that permeates the land of dreaming. When we do this, we begin to exist as a higher being. Existing in this heightened state is key to understanding why the Twin Peaks finale was so sublime.

While I have shied away from interpreting the meaning behind certain moments in Twin Peaks, I think it would help here to give my understanding of the final scenes of the show. I believe that after twenty five years stuck in the Black Lodge, Agent Dale Cooper figured out the logic of the alternate dimensions of existence and came up with a plan to save Laura Palmer from the events that led to her murder. I believe that he wished to do this through navigating time and space and altering the past. This did not work, because the evil that was done to her was not fixed in a time and place. It shattered her soul in all realities, so terrible was the evil that led to her death. I believe that the ending can be explained by understanding what Coop was trying to do, and the inevitability of his failure. You can't erase that kind of evil. It exists outside of time. It is not one action in one reality. It is something that affects the fabric of reality in all possibilities and timelines.

The scream of Laura Palmer is her realization of this evil that was destined to be inflicted upon her. Even though she may have another body, her soul is the same. I believe that this interpretation of the ending gives us as the viewer something truly beautiful. To understand that evil cannot be defeated through conventional or unconventional means, that no matter how hard you try and how much you plan that evil will continue to exist out there somewhere, makes Coop's good heart something to cherish, even while his actions can be seen as futile. This was something that was expressed throughout the entirety of The Return, that Coop's soul, his essential being, was a force for good in the world, even without the aid of verbal communication. The conclusion of Twin Peaks, makes Dougie Coop all the more important and poignant. Where as BOB exists as pure evil, Coop exists as pure good. Those who thought that Dougie Coop was a meaningless and pointless creation are made to look pretty foolish in light of the finale. It was always an examination of the essence of Coop's character. He needed to exist as a newborn to get back to himself.

The mystery is the thing, as I have written about in Why I Love Mystery: Twin Peaks In and Out of Focus. The mystery is holy. It is a journey of the soul and through that journey, a greater understanding of your own being. Some complained, hell a lot of people complained that Twin Peaks left us hanging. These people wanted something the story to end, the mystery to evaporate and be replaced with solid foundations that would explain away all of the contradictions and confusion. I do not hold to the theory that this was David Lynch subverting the expectations of (some) fans, just because he could. I believe that the mystery must live on after the ending. That we must always be left wondering what this life is all about. This is a journey we must all go on. Those who believe that they already know all the answers to life and death, are the most deluded, and not infrequently, the most dangerous. For Coop to have reunited Laura Palmer with her mother and to give some kind of deranged, malformed happy ending, would have not been in keeping with The Return, and unlike the nature and significance of dreams, would have genuinely undermined everything the show had to say about the deep, primal forces of good and evil. Coop himself saw Laura Palmer as a key to undoing the evil that plagues us. If he could only save her, he could save himself and those who he loved.

That Coop tried is what is beautiful and moving. That he spent all of his time away fixating and planning to help this young woman who never should suffered what she did, is some of the most emotionally compelling of any show I have ever seen. Even if it is ultimately futile, trying to do the right thing is what separates us from them. Those who don't become monsters to fight monsters are those who we should follow. Coop never lost his essential optimistic beauty. He is a figure of love and light in a bleak world. Whether he is Dougie Coop or regular old Special Agent Dale Cooper, his soul shines out through the darkness. He is our hope for a better world. I believe that David Lynch and Mark Frost wish us to follow that lightness in an increasingly dark world. That we must do as Coop did, that we must stand up and try to be righteous, and not to allow ourselves to do evil to evil men. That we must hold to our ideals of justice and equality, even in the darkest times.

The Twin Peaks finale was, to me at least, one of the most affecting, gorgeous and sad things I have ever seen. I believe that with time, people will come around to the fact that Lynch and Frost have created almost certainly the most audacious, creative and fucking beautiful show of all time. They have given us so much in these eighteen hours, and they have gifted us another twenty five years of holy mystery. We can never be sure, but who can truly say that they understand everything that comes from life? Being sure is death. David Lynch and Mark Frost are not democratic storytellers. They did what was in their heart. And what was in their heart was something truly special. We all deserve to experience art in our own way, shifting and altering it through our own life story. To understand it, we have to understand ourselves, and that's easier said than done. No show can compare with Twin Peaks. That much is certain. It is from start to finish the most satisfying and compelling story that has ever been told in the medium's history.