Why I Love Bioshock 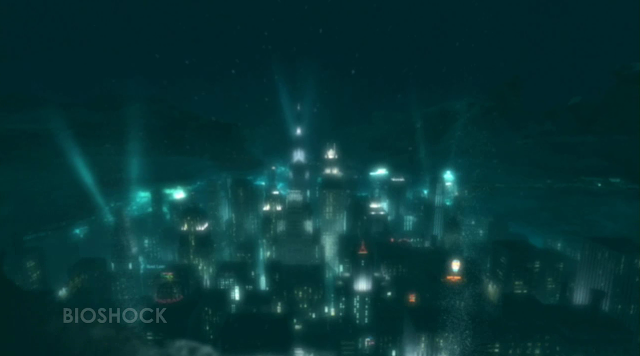 Bioshock changed my life. It was a game that showed what was possible in video games. It was the most beautiful thing I had ever seen. I still remember that first play through as one of the most incredible artistic experiences of my life. Bioshock is a landmark game in interactive narrative. No game before it had so expertly nailed what it means to be in a story, and few have done it as well since. The game is as well as being a superb story, is also a commentary on what it means to have free will, in and out of video games. A great thesis could be written about how it relates to the ongoing debate over whether we truly have free will. Daniel Dennett and Sam Haris would find a lot to be discussed in Irrational's game.

Let's start with the visuals, because they were absolutely jaw dropping when Bioshock was first released. And you know with the gorgeous remaster job that is available on consoles and PC now, it still is just as overpowering and beautiful. Rapture is, along with Columbia in Bioshock Infinite, one of the greatest game worlds ever put on screen. There is just so much to love. You are there with the people of Rapture. Never before had a video game had such an atmosphere and staggering sense of place and time. The introduction to Rapture is perhaps the most stunning of any game, rivaled only by Infinite. From the neon shine of the sky (sea) scrapers to the fine details of the environments that tell the story of how a great city could come to ruins, Bioshock is a marvel to behold at every point.

Bioshock is in many ways a Horror game, but not just for its glorious violence and perversion of the human form. It is a game that expresses how we are capable of doing evil, even with good intentions. This also makes it a great Noir. The central moral struggle in the game is whether you choose to save or kill Little Sisters, brainwashed and twisted children who support the city's supply of Adam, the genetic altering material that has brought the city to its knees. While there may be complaints over the binary nature of the consequences of this choice, there can be none in the questions it raises for the player. I have long held that it is not the results of the choice that matter, but the process of making them. After all, many moments in life where a moral choice arises do not immediately result in positive or negative feedback. It is all about how you live with yourself, not whether you benefit or lose from the choice.

I adore the Medical Pavilion for its supreme Horror chops. Here we discover the consequences of addiction to Adam, yes, but also what happens when absolute freedom is offered to the city's inhabitants. Dr Steinman has become a monster, thinking himself an artist whose work should not be restrained by traditional notions of morality or beauty. This section always reminded me of The Joker in Tim Burton's Batman, in how Steinman became a homicidal artist. Bioshock has some wonderful Horror elements throughout the game. Some of my other favourite moments are when you are tasked with tracking down Spider Splicers in Neptune's Bounty. Here you explore an apartment block connected to an old timey bar, where you discover the fate of the good members of Rapture. Which brings us on to one of the greatest narrative techniques: the use of audio logs.

Audio logs are something that has since become common place, but at the time it was a fresh and interesting way to expand the story beyond the gameplay and environments. Here you uncover the lives of those who lived in Rapture, and why it was that the city became a war zone. In Neptune's Bounty you find a couple, dead on a bed. The nearby audio log tells a story of a couple losing their child to the evils of Adam collecting. I found this so moving and terrifying. What is so sad about Rapture is that it had the potential to be a beacon of hope in a bleak world, but its people just weren't good enough to stay on course. The powerful abused their power, and those on the bottom were left with nothing.

Let's talk about the game's ending, because it was controversial at the time and in many respects still is. I feel that everything the game's ending does, with the exception of the gameplay elements, is in keeping with the story Irrational were telling. Read it on paper and it is exquisite. Everything about becoming a Big Daddy to take down Fontaine, rescuing all of the Little Sisters, and the fact that you are giving away your humanity to save the good people of Rapture. I love it all. That end boss fight though is just too damn gamey and has none of the elegance or class of its sequel Bioshock Infinite. The result of whether you saved Little Sisters or killed them is also far too binary in its approach, with a silly bad ending that punishes you with a shitty conclusion. The game's efforts to make you feel bad by giving you an ending that has none of the power or emotional oomph that the game had established, are not successful. Looking into the eyes of the Little Sisters you have saved in Tenenbaum's hideout is a much more effective way to give rise to moral questioning and soul searching. Fontaine is though a terrific bad guy, as he is unlike Andrew Ryan, not an idealist. He doesn't believe in anything except power. Thank Bioshock Infinite's DLC Burial At Sea for retroactively making Fontaine a better villain than Andrew Ryan. The lobotomizing bastard!

Bioshock was a life altering experience, and something that I still play when I'm feeling low or in need of an escape from this dreary world. Yes, the city is in ruins, but it remains a holy place. There is great hope in its extreme libertarian views, as much as there is chaos and violence. I really want to live in Rapture. I have tried to explain why the game moved me so much, but there is still so much that I can't quite put into words. It is a landmark game in my creative life, and something that is more powerful and entrancing than even the greatest film, book or wrestling event. It has a dark soul, but it still has a mighty heart. Without Bioshock in my life, I don't think I'd be nearly the same person. It has opened my eyes to what can be accomplished in video games, and all other creative media. Everyone who worked on this game, thank you. You made my life better.