Why I Love The Black Dahlia 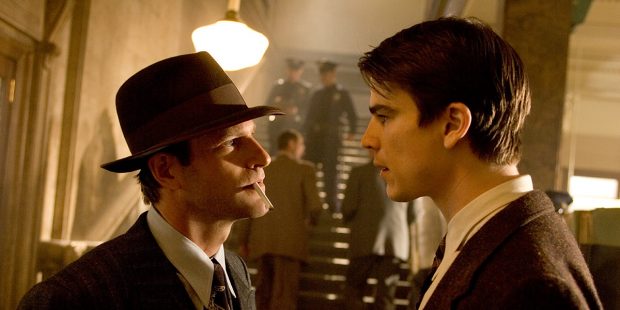 "All right, listen up. No reporters view the body. You photo men - finish taking your pictures now. Coroner's men - put a sheet on the body as soon as they are done. We set up a perimeter six feet back. Any reporter crosses it - arrest him. Now gentlemen, before this gets out of hand, let's put the kibosh on something. With publicity, you get confessions. With confessions, you get crazies, liars, and false leads. So, we keep some things quiet. The uh, ear to ear facial lacerations, disembowelment - you keep this information to yourselves. Not your wives, not your girlfriends, and no other officers, and I mean no... Bleichert, what the hell are you doing here? Where the hell's Blanchard?" "He's right here."

The Black Dahlia directed by Brian DePalma and adapted from the novel by James Ellroy got a bum rap. It was reviewed very badly and was received poorly by the audience. When I first saw the movie, I found it disappointing, considering the quality of the book. Recently when I bought the movie, along with the L.A. Quartet, I found myself wondering how I didn't love it the first time. I think one reason why people were disappointed with it is that it didn't stack up to the genius of L.A. Confidential, and while that may be true, that doesn't mean it's a bad movie. It's a damn good movie, in fact. While DePalma's movie isn't quite as exquisite as Curtis Hanson's adaptation of L.A. Confidential, it has a whole lot going for it.

First, the casting is excellent. When I read The Black Dahlia again recently after many years, the cast was seared into my brain. Aaaron Eckhart is just damn perfect as Lee Blanchard, just the right amount of nervous energy and obsession. Josh Hartnett as Bucky Bleichert is the most important character to get right, and Hartnett is brilliant, a good man lost in a corrupt and dangerous environment. Have to shout out to Scarlett Johansson, one of my all time favourite actors, who plays Kay Lake with beauty and grace. I also have to mention the great character actor Mike Starr who does so much with so little, as Russ Millard, one of the few good cops on the force. I also love Patrick Fischler as Deputy District Attorney Ellis Loew, whom you will recognize from L.A. Noire where he played Mickey Cohen, and the diner scene - short film within a film - from Mulholland Drive, and of course Twin Peaks The Return. When I read The Big Nowhere recently, I found myself imagining Fischler as BOTH Ellis Loew and Mickey Cohen, which led to some confusing moments!

Second, the movie looks gorgeous. Thank DePalma, whose track record is top tier for beautiful looking pictures, and of course cinematographer Vilmos Zsigmond, who has a list of amazing movies to his credit, most importantly two classic Noirs in The Long Goodbye and The Two Jakes. Third, it's just a damn good story. While there are some cuts to the book - I would love to see the original three hour cut - DePalma and screenwriter Josh Friedman did a good job at keeping the soul of the book intact. Considering that The Black Dahlia was James Ellroy's breakout hit, and that it is possibly the single greatest work of Noir in history, even with all the cuts and changes, the story is so damn compelling that it sweeps you away all over again.

Brian DePalma has made some of my favourite movies with Carrie, Blow Out, Body Double and Snake Eyes being high up on that list. DePalma is a director with a killer style and flair. Some have accused him of making exploitation movies, but when he is exploiting your fears and desires in such a beautiful way, what's the problem? The Black Dahlia is full of dark impulses and sexuality. Nod to Hilary Swank for being so seductive and charismatic. The film gets to the heart of the thing in much quicker fashion than the book, though that is to be expected considering how much had to be fit into two hours. Swank and Hartnett are very believable as a couple driven by their base urges, and Johansson and Hartnett are very sweet together and you truly believe that they are meant to be together.

The Black Dahlia murder has such an iconic quality, and is something that has obsessed people for generations, not least of whom James Ellroy. The movie in its brutal violence and psycho-sexual obsession also takes on an iconic quality. The way that DePalma shoots the scene where Elizabeth Short's body is found is just graphic enough to be shocking, but ambiguous enough so to keep some mystery alive. It is never shown in full, always in the corner of your eye. This is such an effective way to depict a sadistic and brutal crime, creeping into your dreams and haunting you, long after the film has ended. After watching Twin Peaks The Return again over the last few days, something struck me about the murder of Laura Palmer and how much in common that story had with The Black Dahlia. Both are beautiful young women, cut down in a despicable act of violence. Given that the novel by Ellroy was released in 1987 and was very much in the public consciousness, it seems a fair guess to say that the story had some impact on the tone and story of Twin Peaks.

Let's talk about some of the best scenes. I love the whole Mr Fire and Mr Ice boxing match. It is translated perfectly from the book to the screen. I love the scene where Rose McGowan's character is interviewed by Bucky, a gorgeous little microcosm of Noir in one scene. McGowan plays it like she got her direction from James Ellroy himself, so close to the book is she. The scene where they find Elizabeth Short is, as already mentioned, one of the best pieces of aesthetic violence that I have seen. I love the speech that Millard gives to the boys, as quoted above. It comes pretty much verbatim from the book.

The Black Dahlia is a movie that has aged well, and it is I think a movie that people are going to look back on with fondness. Yes, it didn't completely succeed in the same way that L.A. Confidential did, but it really has a whole lot going for it. James Ellroy, for what it's worth thought the film was really good, praising DePalma in particular. "De Palma’s films circumscribe worlds of obsession. They are rigorously and suffocatingly formed. No outer world exists during their time frame. Colors flare oddly. Movement arrests you. You forfeit control and see only what he wants you to see. He manipulates you in the sole name of passion. He understands relinquishment. The filmgoer needs to succumb. His films are authoritative. He controls response firmly. His hold tightens as his stories veer into chaos. He stands and falls, coheres and decoheres, succeeds and errs behind passion. He was the ideal artist to film The Black Dahlia." Ellroy has been a gracious sort when it comes to films of his work, entirely apart from the stereotype of the ungrateful author who trashes any change to his work with entitled abandon. If you love Brian DePalma, watch it. If you love James Ellroy, watch it. If you love Noir even a tiny bit, for pity's sake, watch it!