Why I Love Get Out 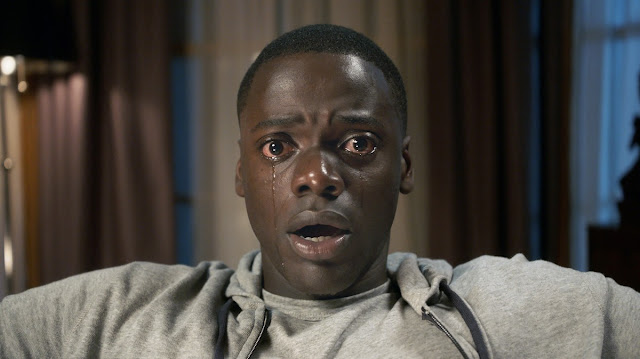 "If I could, I would have voted for Obama for a third term."

Get Out is a film that makes me uncomfortable. Not just because it is a terrific Horror movie, and builds tension and scares extremely well, but because of what it says about me. Some of the things I love the most, and have talked about on The City is Blinking, come from Black culture. My favourite music is R&B and I have long stood up for the genre in the face of condescending nonsense about how it was too base and low down. I am in case you didn't know, a white Irishman, but I can honestly say that I never thought anything negative about someone because of the colour of their skin. At least not in a way that I was aware of. And I guess that's one of the points of the movie. You can feel like you are racially enlightened but be guilty of benefiting from institutional racism. Not that it's a choice, necessarily, but that awareness gives you a better chance of making changes that benefit all.

Get Out makes me uncomfortable because it calls into question some of my deepest loves, and makes me insecure about whether I am appropriating another culture for my own benefit. I don't think I am, for what it's worth. I think as long as you give more than you take, you should be able to enjoy and share the great work of another culture. As long as you're not Pat Boone basically. That Get Out made me question my deeply held loves though is the point. Awareness is a necessary component in order to make sure that the people who deserve the artistic and cultural credit get it first, not the people hijacking the art to make a quick buck.

Get Out is a movie that is tremendously smart and observant, while also being a superb example of the Horror genre. That creeping uncomfortable feeling and the feeling that you are somehow responsible for the enslavement and the exploitation of African women and men for the benefit of white people, is one reason why the film packs such a punch. Another is that it is expertly constructed and pays off a supreme degree of tension with some truly perverse and terrifying Horror elements. The Sunken Place is like something out of Lovecraft, and is a brilliant concept expressing the feeling of helplessness that African Americans feel in so many areas of life, against the years and years of exploitation and prejudice. That scene where Daniel Kaluuya's character gets put under the first time and he starts crying is so tense and disturbing.

The central Horror concept of the film is one of my favourites in recent years, that of dying white people getting new black bodies. The scene before the preparation begins, where Chris is begging his girlfriend to get the car keys so they can leave is one of the most anxiety producing scenes in a Horror movie in years and years. So well executed. As are the scenes where they prepare Chris for the operation, and that immensely creepy information video on the procedure. This element recalls the excellent remake of The Invasion of the Body Snatchers, along with John Carpenter's remake of The Thing. The sheer terror in the scene where Lakeith Stanfield's character snaps out of it and pleads with Chris to Get Out, knocks you over and lays you out for the count.

Jordan Peele has written and directed one of the premier Horror movies of the last decade, neck and neck with other greats like Liam Gavin's A Dark Song and David Robert Mitchell's It Follows. I was not particularly aware of his work previous to this, but I will be keeping an eye and an ear out for anything he does after this movie. The film is not just very scary, and it is, it is also incredibly witty and laugh out loud funny. A big shout out to Lil Rel Howery whose love for Chris leads to moments of FUCK YEAH! Especially that ending. I was so happy that the ending wasn't as dreary and predictable as Chris being shot by the police for protecting himself. That happy ending is earned every step of the way, and leaves you on just the right happy, funny note. I swear the scene where Rod tries to explain his sex slave theory to the police is one of the funniest things I've seen in years.

We all have the capacity to be racist, everyone, regardless of background. This is because we are human beings, not that far removed from a tribal and insular existence. We feel the need to protect our own, and because of that we fear those from other cultures, sometimes for good reasons as those of African descent can attest to. This doesn't mean that we always have to be this way, and that we should let our instincts rule us. Get Out is a brutally good wake up call, alternately funny and scary and disturbing. It is also a terrifically witty satire on the fascination that white people have with black culture, and how that can manifest itself as a negative thing. Give more than you take, and everything will be fine people. A good place to start is this movie. Support it with your mon mons and send Hollywood and the film industry a sign that we want to see more movies like Get Out.