Why I Love INLAND EMPIRE 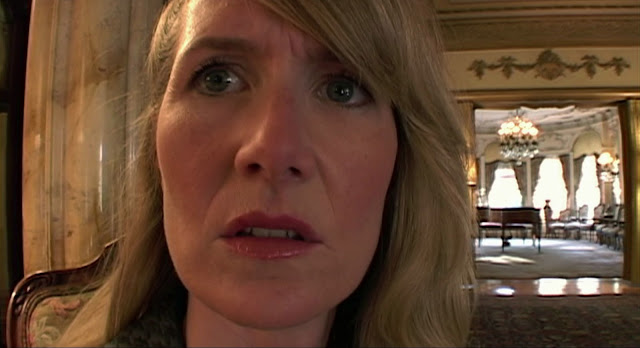 "Cast out this wicked dream that has seized my heart."

INLAND EMPIRE was before Twin Peaks The Return, David Lynch's masterpiece. A three hour epic exploring the human condition through many different stories that all come together in the end, expressing something truly profound about how we deal with trauma and the transformative power of art. INLAND EMPIRE is not for the faint hearted. It is the most challenging, hypnotic and mesmerizing film of David Lynch's career. There is about an hour of (close to) normality and then the bottom drops out and you are consumed by the terror and horror of a world gone wrong. I am not going to attempt to put everything in a linear timeline here. I am just going to try to express why the film is so moving, so terrifying and so damn beautiful.

Let's start with the basics. Laura Dern plays an actor named Nikki. She gets a part in a movie that is said to be her comeback role. The film has a strange history, as Jeremy Irons' character explains. The two lead actors were murdered during the production and the film was never completed. The way that INLAND EMPIRE plays with reality and movie making is one of the most compelling elements of the film. The film wrong foots you as to what is taking place in the production of the movie, and what is actually happening. Nikki becomes the character she is playing in a method acting job that Robert DeNiro would be proud of. Like Mulholland Drive, INLAND EMPIRE has a lot to say about the Hollywood dream, and the sacrifices that are made in the pursuit of art. Much like Twin Peaks The Return, INLAND EMPIRE operates as a shared dream. It is nearly entirely an instinctual work, which turned some people off. Those who wish to dissect the film from a literal/linear point of view will have a hard time, as they struggle with the many shifts and twists that all but destroy the ability to see a movie with a beginning, middle and an end. When you stop trying to fit it into an easily digestible form, you understand the film's true power.

INLAND EMPIRE is not a traditional Horror movie. It's not a traditional anything. It is however incredibly terrifying, as you are immersed in a world of night terrors. The way that it builds super slow tension, building to a distressing payoff where the face of Laura Dern is twisted and turned into an evil shape. INLAND EMPIRE like the other two entries in what I like to call Lynch's Dream Trilogy, Mulholland Drive and Lost Highway, leaves you with an overpowering sense of terror, but also with immense pleasure at the sheer beauty of the thing. INLAND EMPIRE also has a lot in common with Lynch's debut film, Eraserhead. Like INLAND EMPIRE, Eraserhead is a stunningly experimental Horror film, as well as being something else apart from the genre. I swear, the jump scares that Lynch executes in INLAND EMPIRE are among the very best I have ever seen, because they come after long, long stretches of building up to the release. Horror directors could really learn a thing or two from Lynch, for the way he meticulously builds up fear and releases it in ways that further heighten that fear, with moments of the worst nightmare you ever had.

David Lynch described INLAND EMPIRE as a story about "a woman in trouble." Thinking of the idiotic complaints from some members of the audience for Twin Peaks The Return, that David Lynch hates women, it is ridiculous when you consider the fact that Laura Dern's performance and roles in INLAND EMPIRE are among the greatest by any actor, male or female. Seriously, anyone who gets tempted to make obnoxious accusations of sexism or misogyny against David Lynch, WATCH INLAND EMPIRE. Yes, the story deals with themes that are challenging and shocking, but the depth of Dern's performance and the amazing range that she displays in playing at least two characters and maybe more, is so above and beyond the capabilities of most film makers and actors. I am reminded of Kyle MacLachlan's masterful performances as Coop, Mr. C and Dougie Coop, in the way she, seemingly effortlessly, turns on a dime to deliver distinct and unique performances. INLAND EMPIRE is a movie that examines violence against women in a way that only Lynch could pull off. We are introduced to many women throughout the movie, including a collection of women who may or may not be prostitutes, who do a wonderful dance and performance of the pop song Locomotion. One of the most surreal and beautiful moments in the film.

I found a lot in common between INLAND EMPIRE and Twin Peaks The Return. Those who didn't understand Twin Peaks were likely baffled because of the artistic connection between Lynch's last film and his TV transmitted masterpiece. Twin Peaks The Return has way, way more in common with INLAND EMPIRE than it does with the original show. The kiss between Nikki and The Lost Girl was SO Twin Peaks, and what it had to say about releasing tortured souls from a certain kind of hell. I am not confident to make any timeline explanations but I found the reunion between The Lost Girl and her family to be tremendously moving. Much like the moment in Fire Walk With Me where Coop stands over Laura Palmer. A little bit of compassion and love makes even the hardest life so much easier to endure. Another one of my favourite moments is when the camera pulls back after Laura Dern seemingly dies from a screwdriver wound to reveal another camera. Again, the way that Lynch plays with the expectations of the audience, and makes them question what is "real" or not, is done so brilliantly. A woman who was trapped by the pain of the role she was playing. The art consumed her and altered her reality for all time.

INLAND EMPIRE is a film you have to work up to. You need a good grounding in David Lynch, especially Eraserhead, Lost Highway and Mulholland Drive. It's probably not a film for everyone, I know some people who hate it because it doesn't allow them any certainties and an easily digested, reality based story. Those who get it though are sure to find themselves a willing victim of the dreamscape, their fears and loves mangled up into a desperately beautiful, waking nightmare. This is art on a level that very few people ever get to. It is a dazzling, dizzying and altogether gorgeous piece of work. It will stay with me as long as I live.