Why I Love James Ellroy Pt 3: The Big Nowhere 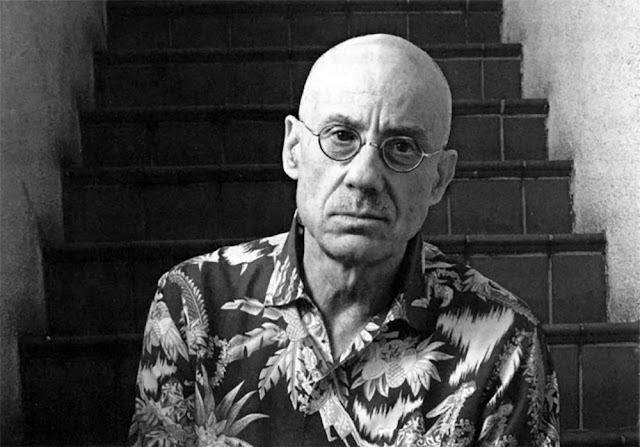 "The fire spread back and upward; the house became a giant sheet of flame. Buzz got in his car and drove away, red glow lighting up the windshield. He took back streets northbound until the glow disappeared and he heard sirens whirring in the opposite direction. When the noise died, he was climbing into the foothills, Los Angeles was just a neon smear in his rear-view mirror. He touched his future there on the seat: sawed-off, heroin, a hundred and fifty grand. It didn't feel right, so he turned on the radio and found a hillbilly station. The music was too soft and too sad, like a lament for a time when it all came cheap. He listened anyway. the songs made him think of himself and Mal and poor Danny Upshaw. Hardcases, rogue cops and Red chasers. Three dangerous men gone for parts unknown."

The Big Nowhere is the second title in the L.A. Quartet. It is my second favourite after The Black Dahlia. It follows three characters, young Danny Upshaw a policeman with the Los Angeles Sherrif's Department, Mal Considine a Los Angeles Police Department Lieutenant desperate for career advancement, and Turner Buzz Meeks, an ex cop working for Howard Hughes. The Big Nowhere in many ways laid the foundation for every James Ellroy book to follow it, focusing on multiple characters and weaving many complex story lines through a book that depicts the folly of the Communist witch hunt and depicts Los Angeles in the 1950s in startling, brutal clarity. There are moments in The Big Nowhere that had me punching the air with satisfaction, screaming FUCK YES!

It was, no doubt, very difficult to follow up The Black Dahlia with another murderer, given the iconic nature of that event, but Ellroy does a sterling job here. The Wolverine is written with such savage insight and innovative, perverse sexual violence. What makes the serial killer plot so compelling is the sheer level of thought and detail imbued in Ellroy's writing. When the killer is revealed the murderer seems more terrifying, not less as is the case with so many murder mysteries. The sheer level of deviancy in the story of this insane killer and the sadness in his life makes you want to go back and read the entire book again from the perspective of knowing the truth. A victim of incest by his narcissistic father, and bent on revenge when he is spurned by his father for a woman, Coleman takes on the title of The Wolverine.

Some people have questioned if James Ellroy is bigoted, given the racial and sexual invective that populate his work. This is to fundamentally understand both Ellroy and Noir. This is a world that is severely prejudiced against anyone who is not a white Christian man. The true test of whether Ellroy is homophobic is if he can write gay characters. And man alive he can. Danny Upshaw, a smart, sharp Sherrif's Deputy becomes obsessed with the brutal murder of gay men, and is intent on solving the case and bringing the killer to justice.

Danny is a repressed gay man and can't come to terms with that fact. The way Ellroy writes him is so beyond any stereotypes, so believable and real. There is nothing token about him. This isn't a sop to the liberal crowd, or an attempt to fill a socially responsible quota. This is a character who needed to be written. He is strong, very smart and obsessed with doing the right thing, even while he breaks the world. Ellroy is fearless when he writes and Danny Upshaw is proof of that. When he dies shockingly in a suicide, for fear of his secret being revealed to the public, it gives the reader a serious jolt and lets you know that anything can happen.

While I believe that Upshaw is the best written character in The Big Nowhere, my personal favourite is Buzz Meeks, bagman and pimp for Howard Hughes and himself an ex-cop. When I first read The Big Nowhere I became obsessed with Howard Hughes, something which Martin Scorsese's masterpiece The Aviator greatly helped with. He was such an intriguing figure in history, and his struggles with mental health issues are something I relate to. I see Buzz Meeks being played by Michael McGrady best known as Rusty Galloway in the exquisite video game L.A. Noire. McGrady has just the right characteristics to nail Buzz Meeks. Big, strong, crooked but oddly moral. Buzz is a good guy in spite of all the bad things he does.

When Buzz buries the hatchet with Mal Considine and teams up with him to avenge the death of Danny Upshaw, it is a whoop inducing good time. The way they find the killer and see that justice is served is so compelling and exciting. The final pages in the book where Buzz robs from Mickey Cohen and Jack Dragna are some of the greatest in Noir history. So, so fucking good. It was nice to see Buzz Meeks make a cameo in Curtis Hanson's adaptation of L.A. Confidential, but I would love to see a proper adaptation of The Big Nowhere, ideally done by Hanson. It could be incredible.

Noir is something that will always resonate with me. The Big Nowhere with its stunning tapestry of stories and brilliantly observed characters, both taken from real life and those of pure fiction, is proof of the genre's ability to make you look in your heart and see the darkness inside. When you see your own capacity for evil, you can become a better person. The Big Nowhere is about this dark night of the soul, and stands as one of the truly great works of Noir fiction. I have read three books in the last couple of weeks, after not having the attention span to get through one book in years. This is evidence of the sublime nature of Ellroy's work, and the terrifying, brutal and beautiful heart that guides him.