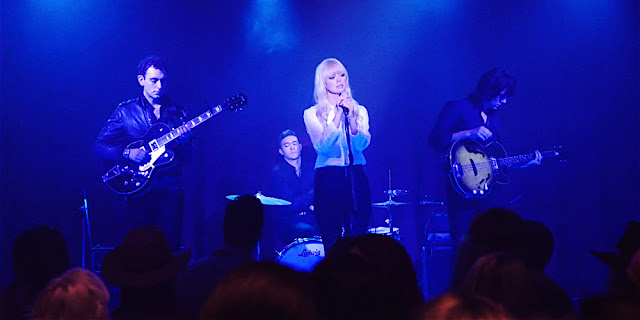 David Lynch has always had a deep feeling for music in his work. Think of Blue Velvet and its prominent use of the title track and In Dreams by Roy Orbison. Or think of the use of Locomotion in INLAND EMPIRE. Twin Peaks The Return has, in every episode a performance by a band or artist that reflects the story that was told in that episode. This is usually concluding the episode, but a few have it earlier. This is such a good idea, echoing in many ways the way Saturday Night Live showcase new musical guests every week. The music every episode evokes the mystical and mystifying quality of Twin Peaks. I will discuss two of my favourite musical guests here, with many more to follow in the coming weeks.

Chromatics were not a band I had ever heard, I am ashamed to say. When I heard Shadow in the first episode of Twin Peaks The Return I was entranced. It said so much about why I loved the show. It brought my mind back to the first time I heard Angelo Badalamenti's gorgeous score, particularly Falling by Julee Cruise. It is hypnotic and devastatingly beautiful. As Coop navigates the treacherous world of the Black Lodge, hoping to get back to Laura Palmer and Twin Peaks, your consciousness is immersed in a dream, as made real by Chromatics' lead singer Ruth Radelet. It is a song of longing: longing to find a lost love. I can't think of a more appropriate song for the world of Twin Peaks. "For the last time. For the last time." This is it. One final dream. "And now you're just a stranger's dream.
I took your picture from the frame. And now you're nothing like you seem. Your shadow fell like last night's rain."

This is a song for Laura Palmer, to sing praise for her life and death. This is a song for Coop, to sing praise for his never ending hope that right will be done. That moment when the synth takes over, and you are wrapped up in the music and visuals... pure magic. "For the last time. For the last time. For the last time." This is the last time. We may never see this world again. "Can you hear me? Can you hear me?" Some people got frustrated with the musical guests throughout the show, and I can't really understand why. They are just as integral to the story as anything else. They express the soul of Twin Peaks, and help immerse you in the world. David Lynch always has a reason for doing what he does, even if it is not immediately apparent. In the quiet moments, there is just as much going on as there is in dialogue heavy and plot heavy sections. Twin Peaks The Return is full of moments that express profound truths just by the way the camera moves and shoots faces, or allows the music to tell the story. We live inside a dream. 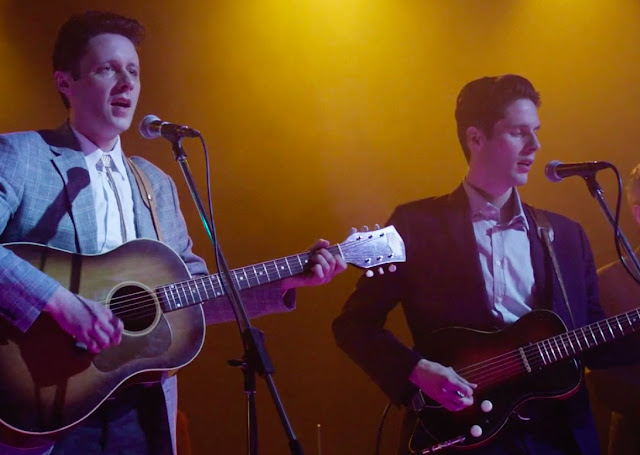 My angel sings down to me
She's somewhere on the shore waiting for me
With her wet hair and sandy gown
Singing songs waves of sound."

Mississippi by the Cactus Blossoms is my second favourite song performed in Twin Peaks The Return. The song reminds me of Gillian Welch and her musical partner Dave Rawlings. I am sure they could do a great cover. It's a song about getting away, or as Dr Jacobi would say, shoveling yourself out of the shit. "There's a dive I know on River St. Go on in and take my seat." This is the kind of Country/Folk song that speaks to the heart of Twin Peaks, that is a place that will soothe your worried mind and let you find peace. Lovely harmonies on here, reminding the listener of The Carton Milk Kids. As a side note, how cool is that guitar on the right? Makes me want to get back into playing guitar!

"She's somewhere on the shore, waiting for me." Twin Peaks The Return is in many ways about Coop's love for Laura Palmer. Not a sexual or romantic love, but a deep connection with her soul. Twin Peaks The Return is an attempt to save Laura from the evil that infiltrated her family and led to her death. Mississippi is a song that gets to this truth, and expresses a lonely life that is made whole by a woman. In many ways Coop's life is made whole through his attempts to get justice for Laura Palmer. You can see her wrapped in plastic as you listen, her beautiful face dead and void of life. Here's a neat thing: the name of the album on which Mississippi appears is called You're Dreaming. How perfect is that?

Twin Peaks The Return is the greatest TV show in history, for many reasons. One of these is the way it uses music to express the instinctual art that is at its core. Both Shadow and Mississippi tell tales of Twin Peaks. They encapsulate everything beautiful and good about the town and its inhabitants. They tell tales of the lonely, of the loveless, and through their music bring comfort and joy where once there was none. "I'm going down to the sea." "You're in the water. I'm on the shore."