Why I Love The X-Files 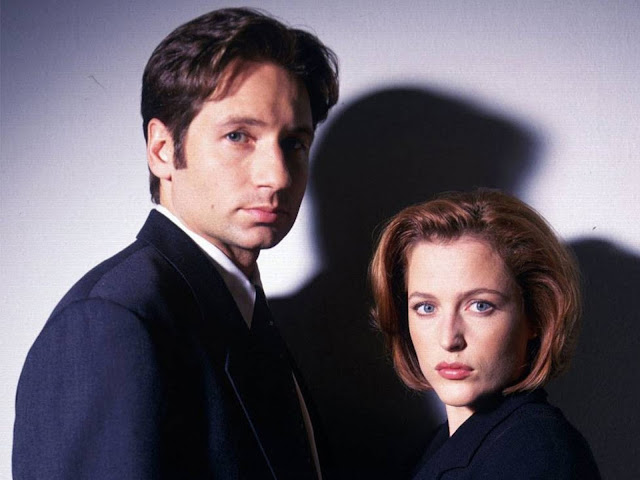 "The truth is out there."

The X-Files followed Twin Peaks and preceded Lost as a cultural phenomenon that wrapped people up in glorious mythology and mystery. While the show undeniably went on too long, it remains a stunning exaltation of the power of the question. What is out there in the dark? Delicious things, friends. Delicious things. The X-Files began its run in 1993, just two years after Twin Peaks ended its original run. Of course, those of us who adore Twin Peaks will be aware that David Duchovny first debuted as an FBI agent in that beautiful and original show. The X-Files shares a lot with Twin Peaks, namely its reverence for the mystery, and not providing easy answers to complex questions. I didn't really watch The X-Files during its original run, though I did see a few select episodes through my aunt. I discovered the full genius of the show in and around the time that I first watched Twin Peaks and Lost, in and around 2005.

I watched the entire run in one go and was beguiled by the beauty of the thing. Here was a show with real gumption. Things were left open ended and many BIG QUESTIONS were never fully explained. This might make it sound less than satisfying, but please try to understand that everything you've ever been told about Art that glories in Questions is probably wrong. To leave the viewer with 100% certainty and comfort is to shortchange the viewer. The true artists know that for the imagination to fire up on all cylinders it needs SPACE. It needs room to move. The X-Files understood this. When it did try to answer questions directly, I felt it lowered itself. When it gave us just enough information to form our own ideas, it was operating at the height of its power.

I love The X-Files without having even a small amount of tolerance for conspiracy theories. I don't believe that JFK was killed by two shooters, I don't believe that aliens are living among us and I don't believe that vaccines cause autism. Still, in context, I am willing to believe anything in the X-Files. This is because it is a show that takes you in and makes you invest in its own unique logic. Small irritations around scientists being depicted as stupid and unwilling to believe facts that are obvious and apparent aside - I mean, with all the experience with aliens, why wouldn't Scully believe? I don't get it - The X-Files seems like it was made just for me. It is a thrilling, overpowering work of art that holds the mystery as a holy thing.

Let's talk about some of the best episodes. I still adore Tooms, the tale of a serial killer who eats human livers. When I saw this episode first, I was only seven years old and it scared the ever loving shit out of me. I appreciate that experience, as even when I watch it today, with a heavyweight cred in Horror movies - I watched Martyrs and didn't flinch once - it still creeps me out. The episode is tactile and evocative, making you smell things that aren't there. This is one of the strongest elements of the show: to take a monster of the week and make it the most important thing. It may be argued that the standalone stories in The X-Files are among the strongest in the history of the show.

There is so much to love about the mythology. I mean, The Smoking Man, how fucking cool is he? PRETTY FUCKING COOL PAUL OK. I love the central story of Mulder's sister being abducted. I think that the episode Closure would have rightfully been the series finale, had cooler heads prevailed. Let's talk about that finale. I didn't like it when I first saw it, I'll admit. I thought it was too BIG ACTION, EAT SOME ANSWERS. It reduced a mystical journey into a simple questions and answers routine. When I watched it again some time after I felt better about it, but I would have to watch it again to give my final judgement on its worth.

The X-Files is one of the best shows of the 90s. This is without a doubt. It stands alongside Twin Peaks and Lost as shows that got right into the mind of the viewer and wrapped them up in a perpetual state of questioning and mystery. I don't think we would have had the great show Lost without The X-Files. The X-Files showed that you could create a show where you didn't answer your central mysteries until well into the show's run. The X-Files then improved upon Twin Peaks' mistakes - namely the reveal of the murderer way, way too early - and laid the groundwork for great work to follow. I love The X-Files and recommend it to anyone who wants to experience a rip roaring good time full of mystery and intrigue!