Why I Love Life Is Strange 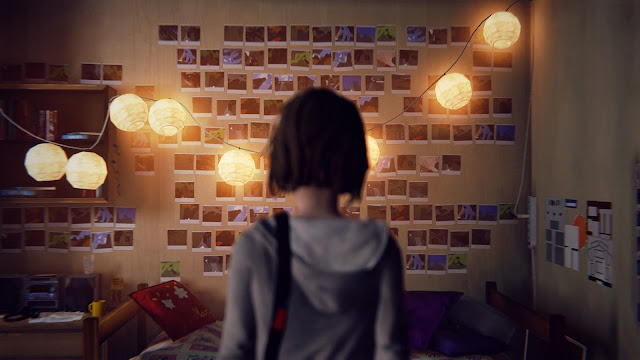 "Everything is a picture waiting to be taken... "

Life Is Strange is my kind of game. Developed by French outfit Dontnod, the game recalls the best work of Telltale particularly the first season of The Walking Dead and my favourite The Wolf Among Us, as well as David Cage's ambitious, though flawed, Heavy Rain. The basic story concerns the ability of lead character Max to rewind time, and how that ability affects her relationships with the people in her life. While the time rewinding mechanic results in some very good science fiction, the real joy of Life Is Strange is to be found in the way it tells the story of Max and the people around her. It is a game about relationships and friendship and the sacrifices that are made for loved ones.

Some have criticized Life Is Strange for being overly sentimental, and containing stock "teen angst." I have never understood the sentimental criticism for pretty much anything. People are frequently sentimental. We don't have the benefit of having classy scriptwriters. We need to muddle through on our own, and that often results in moments of obvious, though emotionally sincere, sentimentality. As far as the "teen angst" tag goes, all I can say is that Life Is Strange is incredibly well observed, and while some of the language may at times seem quite stereotypical, teenagers totally speak like this, and think like this. Again, while it may be stereotypical, it's stereotypical because it's true.

There are some truly beautiful moments in the game. My favourite is when you wake up beside your best friend Chloe. She puts on the CD player and starts the song Lua by Bright Eyes. You have the option to simply lie beside your friend and listen to the beautiful music. I first heard Lua in 2005, when I bought the Bright Eyes album, I'm Wide Awake, It's Morning. It is a song that was the soundtrack to my first love, and always struck a deep, meaningful chord within me. The music in Life Is Strange is exquisite throughout, but this moment is particularly meaningful, bordering on profound.

Spending time with your best friend is something that very few games have addressed, and while yes, there is a more traditional element of plot and concept, Life Is Strange is powerful because it looks at something that basically no games have: young women growing up and dealing with the problems that arise in life. The game is so well observed though that the player never feels like they can't relate to it because of their gender. This is a game that knows friendship, especially those dizzying early life friendships that last a lifetime. With all of the issues around women not being adequately represented in video games, it is refreshing and heartening to see such a beautifully executed depiction and examination of women, without the constant need to relate it back to a man.

Life Is Strange looks gorgeous, which always helps. For a story that follows a rising photographer, the game needed to have a keen visual sense, and it really does. The photo above that Max enters into the Everyday Heroes competition is mysterious, moving and full of optimism. I loved the scene where Max is bombarded with questions about her work at an art gallery, all the time trying desperately to transport herself back in time, in order to save the world. There is more than a touch of Twin Peaks about Life Is Strange, from a TWNPKS license plate to a concerned letter about psychotic asshole Nathan Prescott from a Dr Jacoby. It is not a surprise that Dontnod took so much inspiration from Twin Peaks, given their similar interests in uncovering the evil that is done in seemingly idyllic places. This is particularly true in the game's closing scenes, where everything gets very surreal.

Life Is Strange gives the player real agency, with the ability to alter the way the story goes in fairly major ways. The game gives more meaningful choices to the player than Heavy Rain did, though it's hard to pin down exactly why. My best guess would be that Dontnod are far better at telling a compelling story and writing and executing compelling characters. Max is an immediately likeable and interesting character and someone who you really, really want to see succeed. Her friendship with Chloe is one of the realest and most touching of any video game I have played. It is so well observed that the player is immediately transported back to a time when best friends meant the world.

Heavy Rain for all of its waffle about providing a deep and emotional story, ultimately left the player cold and detached. There was no killer character that made the player invest in what happened to that character. When people die because of your failure, you feel it. Life Is Strange is remarkably good at provoking moral questions from the player, even in moments where there is no immediate consequence. Like all great works that examine morality, the trick is not just to present a punishment/reward system for "right" and "wrong" choices, but to make the question itself, and the act in of itself, the thing to think on. I haven't played another game that so confidently and expertly led the player through such intense and worrying moral problems. The game's final twist leads the player to a choice that The Last of Us pretended to offer, but didn't. This is one of the great moral questions in the medium's history.

Life Is Strange is then one of the best story driven games that I have played, and something that puts Dontnod on the level of Telltale at their best, and a much more successful, emotionally satisfying take on the approach that Heavy Rain innovated. There are a couple of irritating moments in the game, owing to stupid attempts to make the game appear more authentically gamey, with obnoxious and unwanted stealth sections, but apart from that, this is a truly special work.