Why I Love My Dear Melancholy, 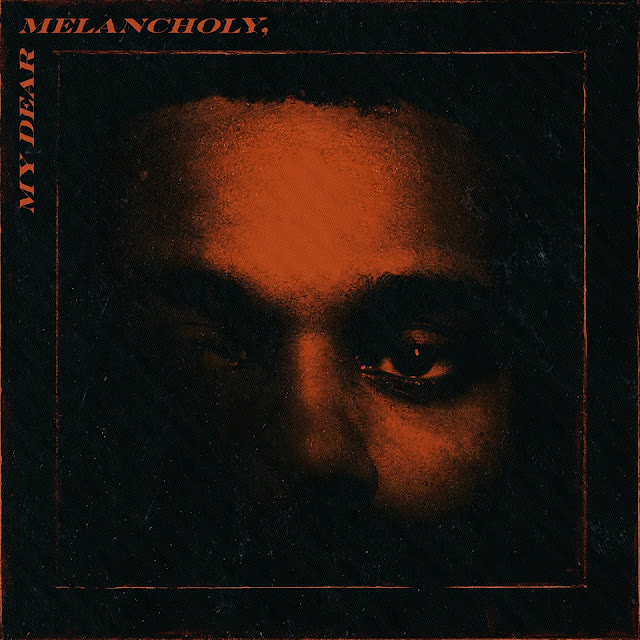 "We found each other. I helped you out of a broken place. You gave me comfort, but falling for you was my mistake."

My Dear Melancholy, is the best work by The Weeknd since 2013's Kiss Land. It is possibly even greater than that, but time will tell. It is a dazzling, dizzying and emotionally complex album. Not since The Weeknd confessed his first ever love on Kiss Land, have we felt so connected to him or so beguiled by the sounds that wrap around and consume the listener. There is more introspection and honesty here than on either of Abel's last two albums, and not to run them down for they are both quality works, but there is something incredibly refreshing about the way My Dear Melancholy allows the listener to explore the depths of a soul. There is nothing shiny or pop orientated about this album. And don't get me wrong: I love his Pop R&B, and am glad that he got to explore the kinder, softer sides of his talent. Noir R&B is though what first got him in the game to begin with, and it is right and true and just that by returning to the desperation and fear and jealousy and pills on pills, he has made what is arguably among the best work of his career.

Yes, it's an EP, clocking in at a little over 21 minutes. Don't let that fool you though: this is a formidable work. There is more wisdom and truth on these six songs than there is in the majority of the new R&B, and it goes without saying (but I'm going to say it anyway) music at large. This may be the defining recording in the Noir R&B canon, for its fierce and damaged heart, for the stellar production, and for songs that provoke deep and complicated emotions. The Weeknd has, with this recording, solidified his reputation as the single most important voice in contemporary music. More than Lorde, or Lady Gaga, or God Help Us, Taylor Swift. And to show I'm not being facetious, throw Kendrick Lamar, Drake, and J. Cole in there too. His work may not have the straight up poetry of these great artists, but it has a power that is unique and pure, and frequently apparent.

Our belief in the new R&B is such that we hold music that is physical, that is intent on creating human beings, that means to strip all of the artifice and hang ups of society away in a blaze of musical elation, to be the pinnacle of artistic expression. These are, as I said a long time ago, The Songs That Will Make You Human. Abel's genius comes in the way that he takes all of these powerful, life affirming feelings and subverts them through a bleak, fearful reality. Yet, the light that shines through regardless, is so much more powerful because of the shadows. Misery can only truly be combated through an intimate awareness of its workings. And Abel knows misery. This is Noir R&B, a genre which The Weeknd is, along with a handful of forward thinking artists like The-Dream, Frank Ocean and in his own roundabout way, Kanye West, rightfully seen as being responsible for. Noir R&B is, just as much as the work of Jim Thompson or Billy Wilder, a genre that is obsessed with the dark side of life. This is fated doom. This is love that turns so toxic that it is indistinguishable from hate.

Call Out My Name expresses so much hurt and trauma; the kind that doesn't fade in time. Whether this is about Selina Gomez or not is irrelevant. It is a story that should be recognizable to all but the luckiest of souls. Try Me is my favourite track on the album. It sounds straight from the House of Balloons, with the production sheen from Kiss Land and that album's sublime level of introspection. While most will obsess no doubt about the Trilogy Abel returning, it is just as significant to me, that he again gets to explore the themes and ideas and most importantly execution that made Kiss Land, in this fan's opinion, his greatest work to date. Wasted Times is an embrace of the physical - "I hope you know this dick is still an option" - even while the heart and soul wonder on the wisdom of pursuing such encounters.

Embrace of the physical is the most immediate reaction one takes from listening to The Weeknd, even as he is forward with all of the weird mental issues that arise from such behaviour. Embrace of the physical is, along with singing style, the thing that marks Abel out as a true student of R&B, and as an architect of its glorious return in and around 2011. Embrace of the physical is, if we are to believe Bruce Springsteen fetishists like Rolling Stone, a base and undignified thing, and something which real artists do not do. Before Rock stars had the pretensions of being poets, and before they cared about the environment or transformative spiritual experiences, they were just as fixated on making music that people - sorry to be coarse but this is a Weeknd review okay - fucked to and danced to. Leave behind your old life as a miserable wallflower. Get off the wall. Get on the floor.

I Was Never There reminds me of the title to one of the Coen Brothers' minor hits, The Man Who Wasn't There. This song, like that film, seems to bring a classic black & white picture to mind. Co-produced by electronic artist and DJ Gesaffelstein - who had a hand in Kanye West's masterpiece and contender for best Rap album of the last decade, Yeezus - I Wasn't There is one of the most affecting and disturbing songs in the career of The Weeknd. "What makes a grown man wanna cry? What makes him wanna take his life? His happiness is never real and mindless sex is how he feels." "Ooh, when no one know what love is and I know it ain't you for sure. You'd rather something toxic. So, I poison myself again, again til I feel nothing in my soul. I'm on the edge of something breaking. I feel my mind is slowly fading. If I keep going, I won't make it. If I keep going, I won't make it." This is so personal and telling that it could just as easily be a suicide note. I pray and hope that Abel is not suffering from this level of despair. We need him far too much, for many reasons but for this most of all: those who can go to the darkest places and come back alive with an ability to relate to and speak for those who can't speak for themselves, we as human beings become better able to weather the terrifying seas of life.

Hurt You is the recovery, through mindless sex. After being torn apart by powerful forces of love, to revert back into base, physical, animal instinct is a shield. "Cause all the nights you slept alone drying your eyes and all the nights you thought about taking your life. Cause if it's love you want again, don't waste your time. But if you call me up, I'm fucking you on sight." And yet, "I don't wanna hurt you." If one cannot have love and sex, then just sex will do, as long as both (all?) parties are aware of the rules. Privilege closes the album. "I've got two red pills to take the blues away." Shout out to The Matrix. Privilege is the assertion that reality is preferable to fantasy, in spite of how comfortable and seductive that fantasy is. The Weeknd could be said to have been living in something of a musical fantasy on his last two albums - a very appealing, beautiful fantasy - and My Dear Melancholy, is the waking up from that dream. While Marvel may be making a Weeknd Starboy comic book, one cannot live in that world for long without losing their soul. My Dear Melancholy, is an acknowledgement that if he can't be Starboy for real, then he'd rather just be a man, low down, down but not out. There is poetry and dignity to be honestly seeking for an answer that you can never seem to find. My Dark Melancholy, is Brother Can You Spare a Dime blown up and perverted. A plea for a hand up off of the ground. It is music that forces the mind to either overcome trauma or to give in and end the journey. It is a staggeringly beautiful and profound work, and one of the best of this young year.