Why I Love Bayley Vs Sasha Banks Ironman Match 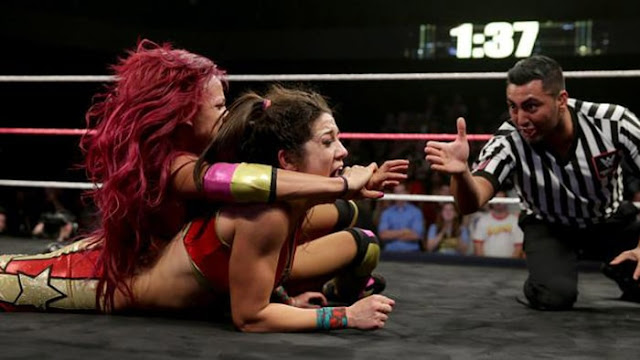 Good wrestling can change your life. When it is at its best, there is genuinely nothing I find more meaningful in created things. The hero's journey: the struggle to endure through trials that ravage your body and soul. Women's wrestling was never a big thing for pretty much anybody. It was toilet break TV, and the athleticism and storytelling brilliance that arose in the men's matches was almost always absent. Not that there weren't great female wrestlers before now: there were, plenty of them. The way these athletes were treated however was shameful, sidelining them in favour of glorified soft porn stars who couldn't spell suplex, let alone execute one. WWE and much of the wrestling in the world was sexist, bordering on misogynistic. Now, in 2018, things have thankfully changed.

Women's wrestling in WWE and NXT is arguably the best thing going today in wrestling. A major reason why this is now the case, has to do with four women: Bayley, Sasha Banks, Charlotte and Becky Lynch. To identify the moment that things changed forever however has to be the Ironman Match between Sasha Banks and Bayley. It is my favourite match of all time. It is staggering in its ambition, in its fearless pursuit of not only equality with the men but to be actually, honest to goodness, better than them. Bayley Vs Sasha Banks is on a shortlist of greatest matches of all time, up there with Shawn Michaels Vs Ric Flair, Hulk Hogan Vs The Rock and Samoa Joe Vs CM Punk. It is the story of an underdog, as many of the best wrestling matches are. It is the struggle to realize your dreams, and to finally win the big one.

The chemistry between Sasha and Bayley is off the charts. They are made for each other. Sasha is one of the great heels of modern times, while also being incredibly likeable and charismatic. She is a good babyface, but she is a superb heel. It is this heel persona that makes the match so incredible. You believe that Sasha hates Bayley and will stop at nothing to reclaim her title that she feels she owns. Winning one match could be seen as a fluke, winning two in a row solidified Bayley as a main event level star, and in such a competitive environment, one of the greatest wrestlers alive. Bayley is, in case you didn't know, the greatest pure babyface since John Cena and Hulk Hogan. She is a pure soul, and someone who inspires me every time I watch her. I see myself in her struggle, just as I did with Hogan. I feel that it is a damn shame that she is currently undervalued and underused on the roster.

One of the key things in an Ironman match is timing. Multiple falls can, if allowed to get out of control, take the anxiety and celebration out of a single fall. Bayley and Sasha do a tremendous job here of making every fall tell its own story, while contributing to a big picture that makes the final moments incredibly tense. HOLD ON. HOLD ON. As the clock ticks down and Bayley comes out triumphant... I lose it. This is a match that could headline any PPV anywhere in the world - well not Saudi Arabia I guess, eh WWE? - and it has the poetry of the classics mentioned above. I am particularly reminded of Hogan Vs Rock at WrestleMania 18, for the pure elation of seeing someone who you thought was down and out, get back on their feet.

A great babyface, like Bayley, has the ability to make you feel like it is you in that ring alongside them. This is one reason why I feel the Anti-Cena people - still sticking to their guns, after years and years of him putting on classic matches - are not only dead wrong about his worth, but also unusually nasty towards those fans, especially the younger ones, who look up to him as a hero. Bayley motivates me to keep going and has been largely responsible for my renewed passion for wrestling in the last couple of years. I never thought I would see a wrestler who made me feel young and wrapped up in child like hope. She deserves to be champion today, and I hope that she will get her shot again soon. I am sure that the crowd will do its usual fickle bullshit and turn on her, something that seems to be already happening in part, but I will never forget how hopeful and full of joy she and Sasha Banks made me feel during this match.

It is incredible how far the women's division has come in such a short space of time, though much respect has to be given to the women of past years like Lita, Trish Stratus and most of all Chyna who paved the way for the ascendant division. I don't think anyone would have thought that women would be headlining PPVs like Bayley and Sasha did at NXT Takeover, and like Sasha and Charlotte did at Hell in a Cell. I am of the belief that we will one day see women wrestle men again, and not have to worry about how realistic it is. If Rey Mysterio can be heavyweight champion, why can't a similarly talented woman? Looking at Ronda Rousey and all of the potential she has to be one of the greats in the business, and how she roughed up Triple H, the future is bright.