Why I Love Drive 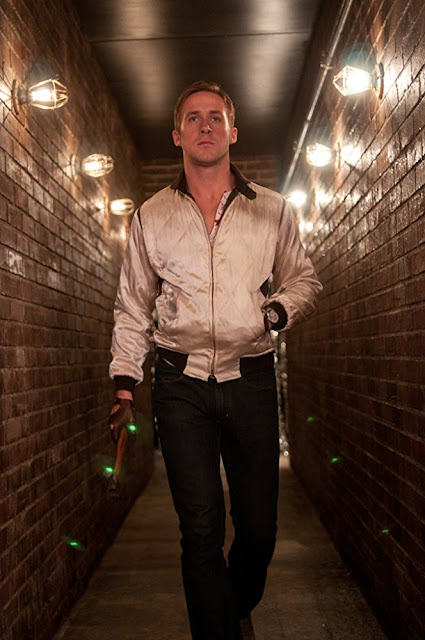 "There’s a hundred thousand streets in this city. If I drive for you, you give me a time and a place, I give you a five minute window. Anything happens in that five minutes, then I’m yours, no matter what. Anything happens a minute either side of that, and you’re on your own."

Sometimes style is substance. This is certainly the case with Nicholas Rinding Refn's Drive. Drive is a Neo Noir with serious chops. It's up there with the very best, and based on pure visual joy it reminds one of another great Neo Noir, Blade Runner. Ryan Gosling, one of the most beautiful men in the world, is a nameless getaway driver who falls in love with his neighbour played by the wonderful Carey Mulligan. Drive has a beautiful soundtrack to complement the incredible visuals, featuring one of the truly great cinematic moments with a long drive with The Driver, Irene and her son Benicio all done to the song A Real Hero by College featuring Electric Youth. "A real human being..."

Noir is not just the absence of good, it is the despair that one feels when hope comes along and you know you can never hold on to it. This love for Irene and Benicio was the one great thing to ever happen to Gosling's character, and this temporary happiness is made all the more bitter by its fleeting nature. Drive has some of the best marrying of extreme violence with incredibly romantic moments, most notably the elevator scene where The Driver smashes a bad man's skull. Kicking his brains in again and again, coupled with the most beautiful kiss between he and Irene. Aesthetic violence is, in my opinion, something that has a purpose in of itself. Quentin Tarantino is perhaps the master of this, but Refn is very close. He shocks at the same time as he seduces the viewer with the poetry of his brutality. Close to the brilliance of the elevator scene is the moment when Christina Hendricks' character gets her head blown off by a shotgun blast. Followed by the inventive use of a shower railing to stab a mob guy to death.

Drive is notable as well for being the return of the comedy/film legend Albert Brooks. Brooks apparently secured the role by cornering Refn against a wall and showing how physically imposing he could be. Well, at least that's what Brooks says as Refn apparently already knew Brooks was the one. Albert Brooks, in case you didn't know, is one of the greatest writer directors in extremely funny, romantic and wise films, as well as being a damn fine stand up comedian and an immensely talented actor. Brooks is physically imposing here, and perfectly cast as a crime boss who is at once unassuming and terrifying. Comedy is timing, so they say, and Brooks' timing is dead on here. The scene where he kills Bryan Cranston's character Shannon is powerful. When he tries to kill The Driver, and gets himself killed in the progress, I shout out in joy.

Bryan Cranston was of course incredible in Breaking Bad, and it is lovely to see him get work like Drive. He could have easily supported his own film about Shannon, and maybe one day Refn will decide to give us that story. Cranston is so good here, world weary sort who gets in way, way over his head. Ron Perlman is hilarious and frightening as Nino, a professional criminal and horrid sort, and the scene where he reminds Shannon of the debt that caused him to be nearly crippled, I am kind of in awe at how threatening Perlman is. When he crosses The Driver however, that is the end of him. "You know the story about the scorpion and the frog? Your friend Nino didn't make it across the river."

Drive reminds me of the great Clint Eastwood Western Unforgiven, a tale of the return of a long retired killer. Just like Clint's character in that great modern Western, The Driver does not want to be defined by his capacity for violence, and yet that ends up being the most important thing about him. This is Noir, and no mistake. In this instance, the people who need to be punished are, just like Unforgiven, but who knows what other violent deeds The Driver committed in the past. I highly doubt we'll ever get a sequel or a prequel but count me in for it, if it were ever to happen.

The ending of Drive is poetic and meaningful. We don't know if he will survive or not, but we do know that he is going to try. The engine is running. There is still hope for the future. This is about as hopeful as a Noir can get, and is almost certainly more powerful because of the genre's rules on happy endings. That turn of the key... the engine starts. He went through hell and he succumbed to his violent nature, but where there is a chance to do better next time, there is hope. Drive is a marvel of a movie, and one of the best Neo Noirs of all time.