Why I Love Singin' In The Rain 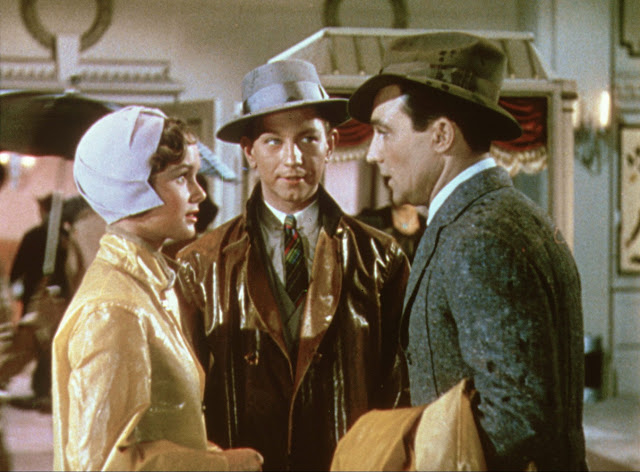 I didn't used to like musicals. I thought they were silly, frivolous things. Then I saw the Coen Brothers' masterpiece O' Brother Where Art Thou? and everything changed. I began to seek out musicals that had the same adoration of the power of music and dance. West Side Story, Grease, The Rocky Horror Picture Show, High Society - all amazing. My favourite though is the classic Gene Kelly movie Singin' In The Rain. Singin' In The Rain is everything The Artist wasn't: a wise, uplifting and beautiful movie about the transition from silent movies to talkies. Unlike The Artist, Singin' In The Rain has more to it than a simple gimmick, it is a wonderful treasure trove of amazing song and dance, and genuinely hilarious physical/verbal comedy. Wrapped around a tremendously romantic story, Singin' In The Rain is probably the greatest musical ever made.

Even if you don't like musicals, Singin' In The Rain is a very compelling, entertaining movie about the unseen/unheard problems that came with silent movie performers transitioning to talkies. When I showed the movie to my musical neutral brother, he enjoyed it very much on this basis, even though the music and dance didn't seem to particularly move him. And how about that dance huh? There are two things I would love to be able to do. The first is to sing. I love to sing, even though I can't. There is nothing that gets me closer to feeling human than to singing along to a song I love. The second is to dance. One of the great moments of my life came some years back when I asked for a DJ to play the song Suit & Tie by Justin Timberlake featuring Jay-Z on a sublime guest rap. I was wearing a three piece suit at the time and the WHOLE DAMN FLOOR got into it with me. When I see Gene Kelly and Donald O'Connor and Debbie Reynolds dance, it lifts my heart.

There are so many good songs and performances in the movie that it is hard to pin them down, as they flow beautifully into one another, but I have to give a shout out to Make Em Laugh for sheer, ebullient flavour. Love the back flips and general physical comedy genius of O'Connor. Something I didn't know when I first saw Singin' In The Rain is that the movie is mostly made up of songs written for previous movies. It is hard to imagine these songs performed better than they are here, though. Good Morning is so damn sweet, and Debbie Reynolds is just someone whom you want to hug and say "I love you" to. The title track is one of the most iconic musical performances of the 20th Century, and for good reason. Stoic, life affirming and beautiful.

I was happy to see that the musical has new life in modern day times, not only with O' Brother, but with the wonderful La La Land starring Ryan Gosling and Emma Stone. You can feel the influence of Singin' In The Rain on this movie in every moment. Hell, pretty much any musical made has to stand up and recognize Singin' In The Rain as a titan in the genre. There is no musical more iconic than Singin' In The Rain, and we have so much to thank it for. I know that without Singin' In The Rain, I never would have gotten into all of the amazing musicals I have had the pleasure to see. The musical is, I think, one of the purest genres going, and I would love one day to write one. I still believe that there is some considerable goodness to be found in a super hero movie where the super power is the ability to make people sing and dance.

Singin' In The Rain is also very funny, especially the scenes with Jean Hagen as Lina Lamont. "I caaaaan't stand it." Brilliant. There are some amusing scenes throughout. I particularly enjoy the meeting of Gene Kelly's character and that of Debbie Reynolds'. This is something that is perhaps referenced in La La Land when Emma Stone means Ryan Gosling's character at a party. The mirror image of Singin' In The Rain, where the man is in the menial entertainment role, rather than the woman. The great embarrassment of Lina Lamont in the final moments of the movie are at once hilarious and romantic as all hell. The look on Debbie Reynolds' face when she thinks that Gene Kelly doesn't love her is something which will stay with me for as long as I have breath.

I have often written about music that makes you human, and there is no music better at making one human than Singin' In The Rain. It is a joyous celebration of life, holding firm to the GOOD THINGS, even while the world can crash around it. It is a movie that deserves to find a new audience every generation, and I am sure that it will continue to do so. I am suspicious of the person who does not find joy and love here. This is some of the most life affirming, uplifting art of all time. Let's enjoy it together, over a morning bite and a dance in the rain.