Why I Love The Weeknd Live at Coachella 2018 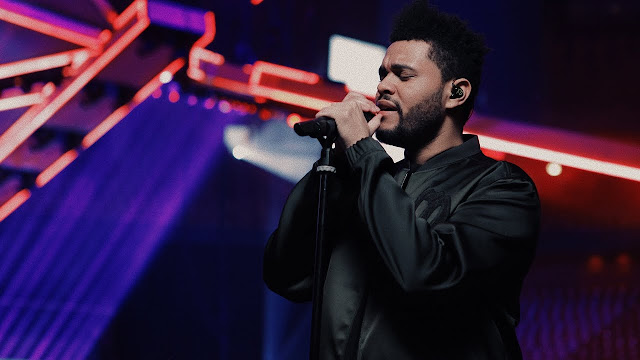 When I first saw The Weeknd live in 2013 on the Kiss Land tour, it changed my life. Sure, I had been to some good concerts before - Brian Wilson performing SMiLE live in 2004 in Glasgow was a highlight - but never had I seen someone who could genuinely be called 1) a future legend and 2) in their prime. It was, I imagine from seeing many concert films, like seeing Michael Jackson in his prime, before the drugs and the mental illness consumed him. Abel Tesfaye AKA'd as The Weeknd is one of the primary architects of Noir R&B, Progressive R&B and Ambient R&B. This means, in case you didn't know, that he is responsible for some of the most astonishing, life affirming and sensual music of the last decade.

The Weeknd headlined last night at Coachella, nearly seven years on from his first appearance at the music festival. Fresh off of his newest #1 album My Dear Melancholy, Abel dazzled and awed the audience both live in person and some 60,000 viewers of the Coachella Youtube live feed, of which I was one. The first thing that strikes me when I look at the set-list below is how many damn good songs he has written in the last three years, especially the strength of his 2016 album Starboy, from which he took seven songs. The Weeknd has a presence on stage that can only rightly be compared with his three biggest influences, Michael, Prince and R. Kelly. He is a phenom of R&B, and has matured into one of the most confident and compelling live performer in any genre, anywhere.

Those who believe, quite rightly, that My Dear Melacholy, is among Abel's very best work were happy to find that The Weeknd is also aware of their otherworldly, bleak and transcendent quality, playing all but one of the six tracks. Hearing these songs live gave their meditative, desperately sad character and gave them a greater urgency. As he sang, "Call out my name," you felt it in your soul. Whomever the song is about - most people point to Selina Gomez, like that matters more than the song's eerie magic - one thing is for sure: this is a work of spurned love on the level of Dylan's Just Like a Woman or Wilco's I Am Trying To Break Your Heart. "I said I didn't feel nothing baby, but I lied. I almost cut a piece of myself for your life. Guess I was just another pit stop 'til you made up your mind. You just wasted my time. You're on top, I put you on top. I claimed you so proud and openly, babe. And when times were rough, when times were rough, I made sure I held you close to me. So call out my name." Those who believed, incorrectly, that The Weeknd was just about fucking and drugs are shown to be the dullards we always suspected they were, with an emotional power and complexity that is without question.

The other songs from My Dear Melancholy, fared just as well, with Wasted Times particularly suited to the live arena. As he sang, "And what they got that I ain't got? 'Cause I got a lot. Don't make me run up on 'em, got me blowin' up their spot," I got dizzy from elation. That melody... hits like a Mack truck who seduces you by being subtle and classy. Privilege which was the pre-encore closer had a much stronger identity than it does on the album, and I have no doubt that it will grow to be one of my favourites on the album, which I am dangerously close to naming the best album of the year, midway through April.

Fans from the mixtapes days were in for a lovely surprise, with Abel delivering four of the classics from 2011: Crew Love, House of Balloons/ Glass Table Girls, The Morning and Wicked Games. These songs have never felt more immediate and relevant to the times we are living in now. To survive in this environment we must deaden the senses, bury them in a wash of pills and liquor. Yet, there it is, the sun, there it is, your face. House of Balloons is still hard and dirty as fuck. When I heard this live in 2013, the bass just about cracked a rib.

Some of the other great moments in The Weeknd's set include a gorgeous version of Reminder, my vote for the best song on Starboy - which has changed about a dozen times since 2016 - and a surprising and addictive take on the Belly collaboration Might Not, which has one of the most compelling melodies of any Weeknd song. Disappointments were few but I was surprised to find that despite guesting with SZA on the previous set, Kendrick Lamar did not turn up to do his verses on Pray For Me and Sidewalks. I hope that there isn't any trouble between the two, as they work so well together and me and my friend Chris believe that they should get together and do an R. Kelly/Jay-Z style album together mixing the best of both worlds. Minor disappointment also goes to not seeing Drake, not because I believed he would be there, but just because I really, really want to see them together again.

The Weeknd is the best person making the best music in 2018. No-one has his mastery of performance, of song-writing, of production, and most of all his unbelievable charisma that rivals the greats of R&B and Pop music of the last century. This was one of the most enjoyable concerts I have witnessed on video, and it was a thrill to watch it live as it happened, something which I will be taking more advantage of going forward. I hope to see Abel perform again, in the flesh. Until then, this will do. XO.