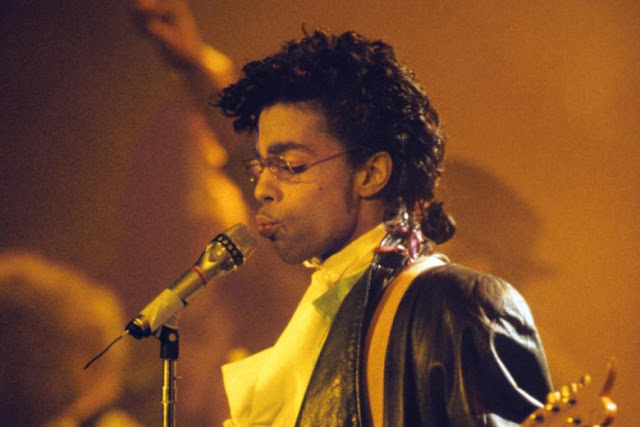 "KICK DRUM POUNDS ON THE 2 AND 4. ALL THE PARTY PEOPLE GET ON THE FLOOR. WE GOT THE BEAT YOU'RE LOOKING FOR. REBIRTH OF THE FLESH, IS THAT YOUR DOOR?"

Crystal Ball was recorded in 1986 following the completion of Camille, an entire album worth of Prince's alter-ego, AKA the skinny motherfucker with the high voice. Crystal Ball was intended to be a triple LP made up of all but one of the tracks from Camille, as well as a smattering from the final, unreleased Revolution album Dream Factory, and a wealth of new material that would go on to make up most of Sign 'O' The Times. Warner Bros., seemingly forever in conflict with Prince over his artistic direction and the financial viability of this vision, rejected the notion of a triple album and forced him to cut it down to a double LP. Sign 'O' The Times, arguably his greatest released work, would go on to make some serious musical waves, but when you hear what was originally intended, it is hard not to be disappointed that we weren't given the full picture. Crystal Ball is in this Prince obsessive's opinion, the greatest work that The Artist ever recorded in a career full of brilliant, dazzling and audacious music.

Crystal Ball has all of the eclectic flavour of Sign 'O' The Times, but with even more to discover. The album opens with Rebirth of the Flesh, the opening track from Camille. Camille's pitch shifted vocals take the listener on a sensual, exciting journey into the world of a Prince house party. Good Lord, to party with Prince... that would have been something special. When I saw Prince in 2010 in Werchter in Belgium, I felt like I finally understood what it was to party with the Purple One. Rebirth of the Flesh is currently unreleased in its studio form, though Prince did release an annoyingly edited (because of his Jehovah's Witness beliefs) live version through his New Power Generation website. Play in the Sunshine follows and is just as electric here as it is on Sign 'O' The Times.

Play in the Sunshine is my favourite Prince song of all time, for a couple of reasons. The first is its positivity and its optimism. It is a joyous call to arms for all of the positive people, in a similar way to Pharrell's mega-hit, Happy. The second reason is that glorious tag on the end of the song. It reminds me the Boys & Girls section in The Beach Boys' Heroes and Villains. If you want to see what it's like to see Prince live, and to hear a stunning version of Play in the Sunshine, check out the Sign 'O' The Times Live DVD - yes, I know it's technically not live due to technical difficulties, but the spirit is the same - and be amazed at Prince's charisma. I swear, in any other generation, Prince would have been THE dominant artist. He just so happened to be around at the same time as Michael Jackson. As great as Prince was live, he couldn't quite compare with the behemoth that was MJ live.

HOUSEQUAKE. Good God! One of the hardest hitting, funkiest, most compelling damn songs in Prince's catalogue. SHUT UP ALREADY DAMN. BULLSHIT, LOUDER SAY IT! HOUSEQUAKE. When Camille returned to us with 3121's title track, we knew that the real Prince had returned. Camille is so seductive and strange, bending and breaking gender rules, which we will see in more detail in a bit. This is a song to get the party moving like it never moved before. The Ballad of Dorothy Parker is a song that display's Prince's lyrical ability, as well as of course, his stellar production and performance skills. The song references Joni Mitchell's Help Me from her album Court and Spark. Joni was one of Prince's heroes and it there are quite a few similarities between them, particularly in their gift to tell a story.

"Well, I ordered, "Yeah, let me get a fruit cocktail, I ain't too hungry"
Dorothy laughed.
She said "Sounds like a real man to me. You're kinda cute, you want to take a bath?"
Awh I said "Cool, but I'm leaving my pants on"

"'Cause I'm kind of going with someone"
She said "Sounds like a real man to me"
"Mind if I turn on the radio?"
"Oh, my favorite song" she said
And it was Joni singing "Help me I think I'm falling"
Brrring the phone rang and she said
"Whoever's calling can't be as cute as you"
Right then I knew I was through."

The title track to Crystal Ball is an epic, ten minute + affair. It has the same "Let's dance and fuck til the apocalypse comes" flavour of 1999. This song was officially released on the Crystal Ball box-set in 1998, which, other than this song, has nothing to do with the unreleased Crystal Ball from 1986. If I Was Your Girlfriend is perhaps the most sensual song that Prince ever recorded, and that is really saying something! The song was misunderstood at the time as being an admission of a desire to be a woman, when it was instead meant as a powerful and sexual love song about how traditional gender roles keep us from truly understanding and loving one another. Camille isn't a woman or a man, he/she/it is something else, above and beyond a binary definition. If I Was Your Girlfriend was covered by the great R&B/Rap group TLC, who unfortunately shied away from the song's gender challenging and did not record it as "If I Was Your Boyfriend." Oh well, still a good cover, that's worth hearing.

I Could Never Take the Place of Your Man is one of the strongest tracks on Crystal Ball, with perhaps the greatest guitar solo of Prince's career. When the keys drops out and comes back in with the melody... pure magic. "Left her with a baby and another one on the way. She couldn't stop crying cause she knew he was gone to stay." BABY, DON'T WASTE YOUR TIME. I KNOW WHAT'S ON YOUR MIND. WOULDN'T BE SATISFIED WITH A ONE NIGHT STAND. AND I COULD NEVER TAKE THE PLACE OF YOUR MAN. Sign 'O' The Times is as close to good Rap as Prince ever got. "In France a skinny man died of a big disease with a little name. By chance his girlfriend came across a needle, and soon she did the same. At home there are 17-year old boys and their idea of fun, is being in a gang called The Disciples, high on crack and totin' a machine gun." When Prince tried to appeal to the Rap crowd, he went coarse when he should have gone philosophical and insightful like he is on this song.

The closing track of Crystal Ball is Adore. This is a song that I have probably sung the most of any Prince song. I remember great times in my brother's room, trying to nail the vocal. Hint: I never could, but boy, that didn't stop me from enjoying it! "In a word, you were sex. All of my cool attitude you took. My body was next." "Well maybe not the ride..." Prince was so charismatic and so sensual that it's easy to forget just how straight up funny he could be. Adore is one of the truly great Prince songs and it closes Crystal Ball in a way that you will always remember. This is an album that has all of the good things about Sign 'O' The Times but so much more. Camille + Sign 'O' The Times = world beating music. I include the tracklist below so that you can compile the album for yourself and see why I'm so damn passionate about it.

1. Rebirth of the Flesh
2. Play in the Sunshine
3. Housequake
4. The Ballad of Dorothy Parker

1. Crystal Ball
2. If I Was Your Girlfriend
3. Rock Hard in a Funky Place

1. The Ball
2. Joy In Repetition
3. Strange Relationship
4. I Could Never Take The Place of Your Man