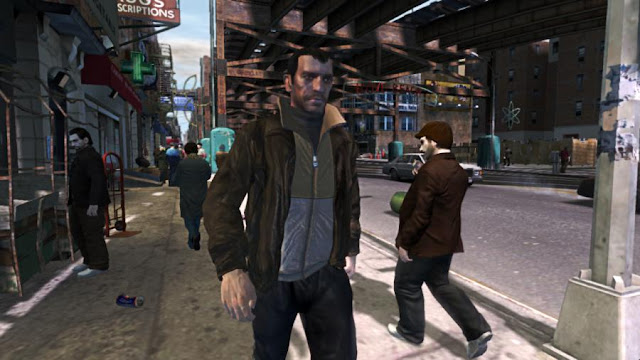 "War is when the young and stupid are tricked by the old and bitter into killing each other."

Grand Theft Auto IV was released over ten years ago and it is more impressive today than it was then. Looking at a ten year old game which is still one of the high points of open world game design, and can still school the hell out of countless games, is something that is unexpected but quite wonderful. I wish that PS3 had a Share option like its younger sister/brother PS4, as I experienced so many lovely little details and spontaneous moments of chaos and beauty, that I would have loved to have shared with you all. It is worth your time to get a copy of GTA IV and experience these wondrous, glorious moments yourself.

GTA IV follows Niko Bellic, who travels from his war torn home to join the many who pursue the American Dream. He hopes that he can leave his past behind him, and leave the person who he has become with it. GTA IV is, along with Red Dead Redemption, a game that makes clear Rockstar's ambitions to create a game not patched together from a thousand references but something original. It is unarguably more mature and thoughtful about violence, about revenge and about being robbed of your soul than anything in its sequel, Grand Theft Auto V. I love V, but it doesn't have anywhere near the level of insight that its predecessor had. Blame this partly on playing to the hardcore GTA fans who don't particularly care about thinking on the fragility of their morality.

V did do some very clever stuff around torture and the role of the player in a game where all excessive behaviour is permitted, but I fear the audience was for the most part too thick-headed to understand that it was taking a shot at them. I am reminded of the wonderful Judd Apatow film The 40 Year Old Virgin, which tricked meat-headed jocks into believing that they were going to have a laugh at the expense of a pathetic virgin nerd, when in fact it was a shot at the jocks for being obsessed in all kinds of unhealthy and aggressive ways with sex as verification for PROPER GENDER ROLES. GTA V's Trevor is the most misunderstood character in the series' history: he is the player made physical. His capricious, psychopathic and utterly unpredictable moral code is a reflection of the average player. That he was not understood as such and that Rockstar were criticized for creating such a nihilistic character is a shameful and unfortunate thing.

GTA IV took major strides in making two disparate things come together. Namely: player driven gameplay and storytelling. For the first time there was good reason for the player to display restraint in a GTA game. Sure there was plenty of chaos and carnage to be had, but Niko's story was so compelling that the player thought twice about throwing a woman down a flight of stairs - I might have done this more than once however, that physics engine... MAN ALIVE! You wanted Niko to survive because you felt invested in his struggle. He was playing a game in a rigged system, where everyone was trying to con him - and most importantly you, the player - being held back by the rich and powerful. This is one of the greatest works about the myth of the American Dream and how genuinely rotten it is at its core, on the level of There Will Be Blood and The Wolf of Wall Street. Maybe not in a stand-up writing brawl, sure. But when you take into account the level of immersion that comes from Rockstar's peerless world building and details, it is should rightfully be considered on that level of artistry.

Speaking of the detail of the thing, ten years later and it's still astonishing. The scope of the world, combined with the fine points on every street corner, every person you pass drinking coffee, talking on the phone, holding papers above their heads as the rain pours down, make what could have been a solid third person shooter and turns it into something that makes the argument forcibly and convincingly that Rockstar should be considered one of the top video game developers in the world. The combat, a real bad point in GTA 3 and to a (slightly) lesser extent in Vice City and San Andreas, is hugely improved and is no longer unfair as hell. Sure, it's not at the same level as it would be in Max Payne 3, but it is no longer a serious tick in the negative column.

It is in the storytelling though that the true advances are made. The story is no longer just a mash-up of movie references - though it certainly has a few - and is intent on providing something new and fresh. The series' satire has never been more pointed or incisive as it is here. GTA IV is proof that Rockstar can genuinely be considered as legitimate satirists. The too many to count moments where you overhear some little shot at MUSLIM PANIC or at the banker crooks who took the world for suckers, provide the player a many layered cake with delicious satirical icing. GTA IV can be seen to be heavily related to what would come in Red Dead Redemption. Both are tales of men seeking redemption, and while there is much violence and pain to be endured, by the end we believe that Niko and John Marston are real human beings with souls. They are bad men, but they still have good in them. This is something that GTA V failed to do in any meaningful way. And I believe and hope that Red Dead Redemption 2 will light the way forward, with the inevitable GTA VI hopefully returning to some of the same intriguing and compelling explorations of humanity. Keep the fun stuff sure, but there is no harm in having some insight too.