Why I Love Max Payne 3 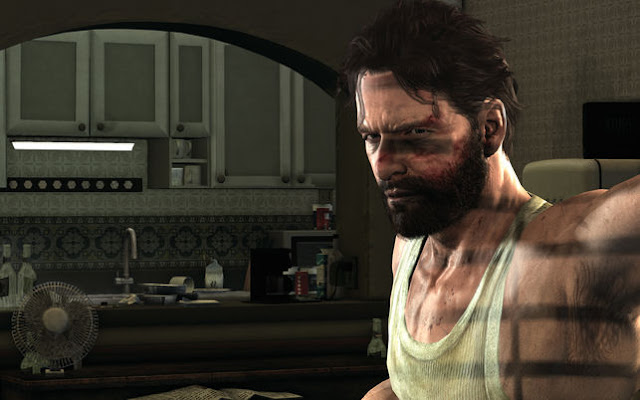 "So I guess I'd become what they wanted me to be, a killer. Some rent-a-clown with a gun who puts holes in other bad guys. Well that's what they had paid for, so in the end that's what they got. Say what you want about Americans but we understand capitalism. You buy yourself a product and you get what you pay for, and these chumps had paid for some angry gringo without the sensibilities to know right from wrong. Here I was about to execute this poor bastard like some dime store angel of death and I realized they were correct, I wouldn't know right from wrong if one of them was helping the poor and the other was banging my sister."

Max Payne 3 is pure Noir. It is the tale of a broken man who has never been able to stop mourning for the loss of his family. It is arguably Rockstar's most underrated game. A reason why this may be the case has to do with the game's difficulty. Max Payne 3 is a challenging game, and there's no getting away from that. It is though, once you get used to the rules of combat - largely around knowing when to be aggressive and when to hold back - a tremendously rewarding game. It reminds me of the great, hidden gem, Vanquish by PlatinumGames, in the way that it encourages aggressive, stylish play. Playing Max Payne 3 simply as a standard cover shooter confuses the player into thinking they're playing nothing special. When you become adept at bullet time and diving across a room, into cover, shooting enemies in the face on your back, Max Payne 3 turns into something truly special.

Max Payne 3 is a Neo Noir, replacing the shadows of the traditional Noir with the oppressive bright light of Sao Paulo, Brazil. Rockstar, as in many of their games, reference quite a lot of other media. Man on Fire directed by Tony Scott and starring Denzel Washington is close in tone and setting, as well as possessing many of the same stylistic flourishes. Like all of Rockstar's work in this and the last generation, the references never feel like plagiarism, but simply a point of reference that is used to make new art, in a similar way to Quentin Tarantino. This is something that is controversial, but I hold that people who say that Rockstar are incapable of making an original story are wide of the mark. Even if it was just good movies turned into a game, it would still offer a unique artistic experience because of the nature of the medium of video games. There is a level of immersion here that is unsurpassed.

The story in Max Payne is among the strongest of Rockstar's catalogue, up there with Grand Theft Auto 5 and Red Dead Redemption. It is full of interesting twists and turns and has a remarkably satisfying conclusion. As a longtime fan of Noir, Max Payne 3 gave me so much of what I want. It is a bleak and brutal tale of betrayal, corruption and extreme violence. And how about that violence? It is some of the most beautiful aesthetic violence I have seen in any medium. When time slows down and you see bullets flying past you, and when you kill the last enemy in an area and you get to see his body up close as it is torn apart... it changes you. The sheer bombastic style of it all is impressive, as you throw yourself down a flight of stairs, killing four men before you hit the ground.

The combat is something that some players never got the hang of. If you're playing Max Payne 3 as a cover shooter, you're not going to see the best the game has to offer. The game encourages you at every turn to take risks and to throw your body into the unknown, dispatching enemies mid-air, carefully planning your attack so that when you land on your back you are in cover. The game's difficulty, as mentioned above, is something that turned some people off and that's a shame. It is refreshing to see a game that is difficult, but rewarding once you learn the rules.

My favourite moments from Max Payne 3 include the stadium level - where the diving down the flight of stairs occurs - the favela, which is possibly the game's greatest series of set-pieces, and my favourite favourite: the airport at the end of the game. The airport is a dizzying, intoxicating finale, with a gorgeous soundtrack and shows the game at its very best. Yes, it's tough, but when you nail it, there is no feeling quite like it. I'm not particularly good at video games, but I'm not bad either, and I found finishing Max Payne to be a very rewarding experience, and one that pushed me in interesting ways.

While we prepare to experience Red Dead Redemption 2, surely set to be one of the great games of the year, it is a good time to revisit some of Rockstar's best games. There is no game by Rockstar more undervalued and underappreciated than Max Payne 3. It is a game of intense, brilliant combat mechanics, unsurpassed aesthetic violence and a story that holds you long and tight. It is one of the great Noirs of the last decade in any medium and deserves to be played by many more people.