Why I Love Red Dead Redemption 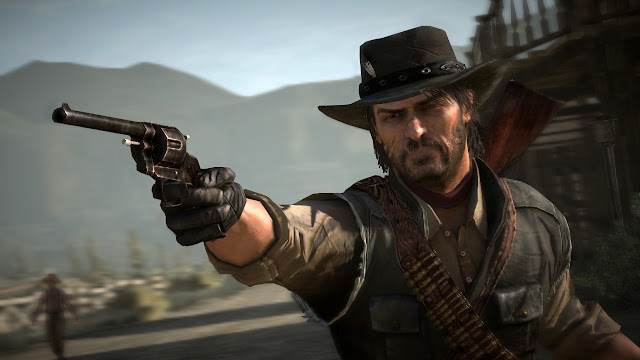 "Some trees flourish, others die. Some cattle grow strong, others are taken by wolves. Some men are born rich enough and dumb enough to enjoy their lives. Ain't nothing fair. You know that."

Red Dead Redemption is one of the great Westerns of modern times. It is along with other greats like Unforgiven, The Assassination of Jesse James, the remake of 3:10 To Yuma and perhaps the greatest Western ever made, Deadwood, a staggeringly beautiful and poignant tale that says much about regret, revenge and trying to survive in a hostile environment. While Red Dead Redemption owes much to the films and books that preceded it, Rockstar craft a story and experience that is unique in the genre. There has never been a Western that so immersed the audience in the world of outlaws, gunslingers and sunsets so beautiful that they overpower the player into a state of pure joy. The world is vast and finely detailed, as to be expected in a Rockstar game. Just as importantly it follows up the success and originality of GTA IV and crafts a story that is deeply emotional, full of well observed moments and characters who the player relates to, or fears, or loves. Red Dead Redemption is a game that is perhaps Rockstar's masterpiece, in terms of emotional resonance and depth of story and character.

Red Dead Redemption puts the player in the role of John Marston, a retired outlaw who has made a deal with government men to buy his freedom from his past by tracking down and killing his ex-posse mates. Rockstar prove here, just as they did in GTA IV, and hopefully will in Red Dead Redemption 2 in October, that they are not just purveyors of mindless violence and chaos. Sure, you can be a bastard in Red Dead Redemption but you are persuaded quite convincingly to follow the better side of your nature. GTA IV had many of the same qualities of emotional depth, but Red Dead Redemption manages to almost completely excise those moments of utterly random violence in favour of a deeper, more personal experience that makes the player invested in the quest of John Marston to find peace. It is not a knock on GTA V, which had many, many beautiful elements to it, but it is noticeable that in both GTA IV and Red Dead Redemption there is a strong sense of morality - even if it may be twisted - and purpose behind any violence. Throw in the fact that there are several good female characters in both IV and Red Dead, and GTA V seems somewhat regressive. I hope that Red Dead Redemption 2 and the inevitable, highly anticipated GTA VI, turn that tide and return to a more thoughtful and mature story.

I chuckle when people make the argument that Rockstar have been making the same game since GTA 3. A quick play of GTA 3 will let you know the countless improvements, innovations and storytelling maturity that have occurred since that game was released in 2001. This is nowhere more apparent than in their last four games: GTA IV, Red Dead Redemption, Max Payne 3 and GTA V. While V may lack some of the sheer emotional power of the previous three, it is still confident and assured in a way that GTA 3 is seriously not. This is something that should be appreciated more: a developer refining an idea and formula over nearly two decades. Too many people are insecure about needing to be seen as doing something new, even if that new thing isn't nearly as fruitful and rewarding as sticking to your guns and making that diamond in the rough shine as brightly as possible.

Red Dead Redemption makes many improvements in the basic gameplay mechanics, as well as being the most mature and emotionally compelling story in Rockstar's history. The combat took a huge leap in GTA IV and Red Dead follows that up with a system that is rarely frustrating or prone to disaster as it was in GTA 3. The way the story interacts with the gameplay in Red Dead Redemption is the most seamless and integrated of any game in Rockstar's formidable catalogue. When you decide whether to take a prisoner dead or alive, it flows directly into who you see your character as. I always took them alive and took pride in my status as a hero in the Old West. While GTA IV had strangers in it, they are much better implemented in Red Dead Redemption, giving the player a deep insight into the world in which you are battling for your freedom. The random events that would go on to be so intriguing and thrilling in GTA V are an innovation of Red Dead Redemption. Sure, you encounter the same ones a few times in the game, they are still a brilliant little way of making the world seem alive. Helping a woman who is being attacked by a drunk bastard makes me feel so good!

Let's talk about the ending, because FUCKING YES, is it powerful! Well really, let's talk about the two endings. First the end of the story of John Marston: sometimes, no matter how hard you try, you cannot overcome fate. The feeling of trying to shoot more men than you are able, and the way your body is ravaged is something that I will always hold up as evidence that not only can Rockstar do BIG, POWERFUL EMOTION but that they are more than capable of creating something original. I have seen most of the great Westerns and no death has hit me harder than that of John Marston. I think of the ending of the remake of 3:10 To Yuma and how Russell Crowe's character unites with Christian Bale because they have come to respect each other, and Crowe turns on his posse and kills them when they shoot Bale. That always makes me cry, and so does the ending to Red Dead Redemption. Protecting his family, John Marston makes a last stand, and in that he secures his redemption. He knew he couldn't win, but he fought as hard as he was able and that has to count for something.

The second ending of the game comes when we follow Jack Marston, John's son, as he seeks revenge for the murder of his father. The cycle of blood and violence continues, and a new person is consumed by rage and criminality. The title crashes in: RED DEAD REDEMPTION. And we know that we have experienced something truly special. This is something that so few games can get to: a genuinely insightful and moving moment that rivals ANY of the great Westerns. Red Dead Redemption should rightfully be considered as such, and those detractors of Rockstar should hang their heads in shame at failing to appreciate the beauty and power of this game. If this was an Indie title, cynical bastards everywhere would be falling over each other to proclaim it as one of the great creative works of modern times. The budget is not the issue: the attention to detail, the masterful storytelling and realization of a living world is. Few can compare with Rockstar, a similar budget or not. Thank you Rockstar for something that continues to inspire and move me to create.