WHY I LOVE THE LAST OF US PART II 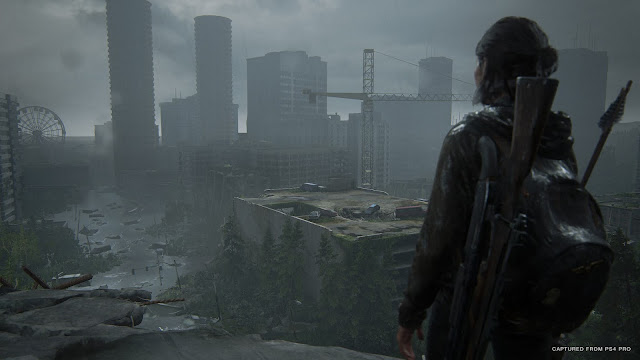 No game that I have played, and I have played a fair few, has impacted me on such a visceral, emotional level as Naughty Dog's The Last of Us Part II. My expectations were high, considering the quality of the original, and of course Naughty Dog's reputation as delivering quality pretty much 100% of the time, but this sequel managed to smash any expectations by giving the player not only what they knew they wanted, but also what they were not in the least bit expecting. It seems to be a given these days that there is some phony controversy or obnoxiously entitled children demanding this or that is changed in a favourite franchise or series, whenever a new bit of art is released onto the public. Thankfully I avoided all such things in the run up to this game. I assume there is considerable hand wringing over the intensity and frequency of the violence from the guardians assuring we don't accidentally consume "problematic" media, and of course probably some fatuous objections to the inclusivity of the cast of the game from the "I don't see color; why is there a person of color in *my* game?!" All that noise should have no impact on your experience here.
I'll be clear: I don't give a shit about moral objections to what I consume. It doesn't bother me that Nathan Drake kills hundreds of people. Context is all, and if Indiana Jones can be similarly brutal and we enjoy the hell out of it, I don't see why video games should be held to a standard that does not exist for any other medium. In attempting to be progressive - a laudable notion - many get caught up in essentially vetting the art we engage with. It must tick all the boxes and ensure that no-one, nowhere, at any stage in its development had so much as an impure thought. The thought that The Last of Us is inherently superior to Naughty Dog's Uncharted games, or indeed the Crash Bandicoot series, because it tackles heavier subjects, or is ashamed of its own violence, is fallacious. No, what makes it superior is that in dealing with darker themes, it actually manages to avoid appearing pretentious, and has some genuinely profound insights into a cycle of violence that comes from trauma, grief and tribalism. More than that, the emotional power of the story, of the many characters of a superior caliber, and the unmatched intensity of the result of uncomplicated but deeply satisfying gameplay mechanics, make this a game that manages to take the player to places that I have never before experienced within the medium.

Much has been written about the way in which Naughty Dog give true parity in attention between the characters we know already, and their enemies. The examination of the background and motivations of those whom we hunt for unforgivable sins, is what allows this sequel to far surpass the original. This is not moral relativism, but an understanding that our story defines us, from our good qualities to the terrible things that a damaged person can do. Those who we pursue in The Last of Us Part II are not sadists or evil monsters, they are people who are doing what Ellie and Joel were doing in the original: trying to survive and do right by those we love.

The Last of Us Part II puts the player in control of Ellie, now an adult, who is still immune to the dehumanizing effect of the fungus. Because of a debt to the man who saved her, she takes off across the country to find those who have wronged her loved ones. The game is brutally violent - even more so than the original - which may put some people off, but it is an essential part of the story being told. I have not played any game that provokes such a physical sensation and the feeling of clawing and scratching for your life. The desperation is palpable, and the way in which Naughty Dog examines this from both sides, it is hard not to be moved in ways that come almost entirely from far, far left field. It is quite stressful at times, though crafted with such skill that one never tires of the experience. A few tweaks to the stealth and combat mechanics make a great difference in giving the player the freedom to experiment and think their way out of dangerous situations. It is now possible to crawl on your stomach, opening up some Metal Gear Solid opportunities that always bring a smile.

That Ellie's story is incredibly compelling business should surprise no-one who played the 2013 original, but that Naughty Dog have crafted a second character of top tier quality whom the player controls for roughly half of the game is unexpected. Abby has some things in common with Ellie - having suffered terrible losses and being a true survivor - but she is hardly just more of the same. Her physicality reminds one of Ronda Rousey at her best. That we love Ellie and are protective of her is a given. That we come to love Abby just as much, and are also intent on ensuring her survival, is the greatest thing about this game. When the two collide and the player is put in the middle, there are some of the most dramatic and utterly heartbreaking moments that I have ever experienced in any medium, but this could only be done in a video game.

And what of the Infected? There is a sequence in a hospital that is one of the greatest pure exercises in Horror that I have seen, heard, read, played. With creature design building on the exceptional work in the original, there are thrilling perversions of the human form that call back to Rob Bottin's work on John Carpenter's The Thing, and the Resident Evil series, which itself took a lot of inspiration from that classic film. The game is so tense and anxiety provoking that I had to take regular breaks, even while desperate to see what happens next. It is a superb Horror game, and like so many great Horror films and books, it has so much more to it than simply scaring the living hell out of the player. Due to caring so much about the characters, failing here means a crushing sense that you have let down a loved one. This is a case of every element of the design of the game working together and holding one another up.

If the ending wasn't as good as it is, I would be less sure of saying that The Last of Us Part II is the best game that I have ever played. Poetic heartbreak, but there is some comfort in the fact of the beating heart, of the possibility to fight another day. The player feels like they have been through a war that is draining not only of the physical, but the emotional and the spiritual. It is so powerful that I could not immediately start another playthrough, after I completed the game, having to live with the ending in my heart for a time before I would be ready to put myself through it again. The Last of Us Part II might very well be too depressing and dark for some, but the light that shines through is all the brighter for taking you that low. A stellar work of art that is likely to be spoken of in decades to come as a high water mark in interactive storytelling.