Why I Love Bioshock Infinite Part Three: Hall of Whores and Down in Finkton 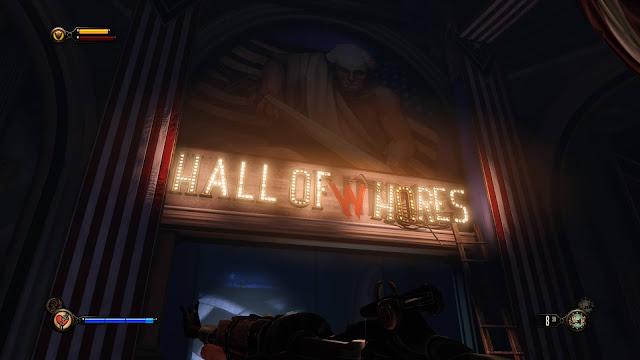 Bioshock Infinite was criticized quite severely for being so violent. Even Ken Levine's video game buddy Cliff Bleszinski called the game out for what he felt was gratuitous violence. As I have already discussed, this is a hollow claim as the game's violence is essential for the story it is telling. This is seen most obviously in the Hall of Heroes section. As you fight your way toward the First Lady airship, you encounter a former military colleague of Booker DeWitt's, Cornelius Slate. You both fought at Wounded Knee and share a common history.

"My men and I are doomed, doomed as noble Custer was at Little Big Horn. But we shall not yield to Comstock and his tin soldiers. But my scout has seen him...Booker DeWitt is coming here, to the Hall! DeWitt...we called him the White Injun of Wounded Knee, for all the grisly trophies he claimed. A man such as he...might just grant us the peace we seek."


This entire section is the heart of what the game has to say about violence.  If you choose to kill Slate, Elizabeth says "I suppose it was mercy, do you ever get used to it, killing?" Booker replies, "faster than you can imagine." Killing is a matter of fact part of life for Booker DeWitt. He has long passed the point where it bothers him. He is more comfortable with violence than without it.

The voxophone "The True Colour of My Skin", often missed, goes some way to explaining how and why Booker became a monster. "In front of all the men, the sergeant looked at me and said, “Your family tree shelters a teepee or two, doesn't it, son?” This lie, this calumny, had followed me all my life. From that day, no man truly called me comrade. It was only when I burnt the teepees with the squaws inside, did they take me as one of their own. Only blood can redeem blood."

Think of this for a moment. Here you have a $200 million game that has as its protagonist a man who burned women and children to death. This is quite remarkable when you think of how rarely AAA video games push the player in issues of morality and generally avoid everything that could possibly cause offense. That you have such a high budget title confident enough to push the player to explore the depths of their own prejudices and capacity for violence, is something to be appreciated.  This is on the same level of introspection as you would be more familiar with in the context of the great Indie titles of recent years, especially with something as emotionally complex as Firewatch.

The Hall of Heroes is a propaganda outfit. It means to take some of the most brutal and unjust actions of state backed violence and twist them into something to be proud of. This is where the game, if the player was under any misapprehensions, states outright why the violence depicted is not to be applauded. It is just another link in the long chain of personal moral degradation of Booker DeWitt. That Booker does not see a difference between the Vox Populi and The Founders is of utmost importance in the story the game is telling. Booker doesn't care about politics or affiliation, he just cares about how it affects him and who he has to kill to get what he wants. This is an area where a lot of people got confused about the meaning of the story. They were confused because in every other media, the story of racism being unjust would be the story. More than that, it would be a story that had as its hero a man who valiantly fought against that injustice. But Booker DeWitt is not a hero. He is not a man who cares about the suffering of his fellow human beings.

Soldier's Field and the Hall of Heroes have some truly compelling combat sections, most fiercely seen in the fight to acquire the First Lady airship. Comstock sends his army to take down the False Shepherd. You fly all over the astonishingly lovely Soldier's Field, swooping and soaring through the sky. You pick off rocket wielding foes with precise shots from your sniper rifle. You set one Motorized Patriot against another and you leave many bodies circling around the fairground carousel. 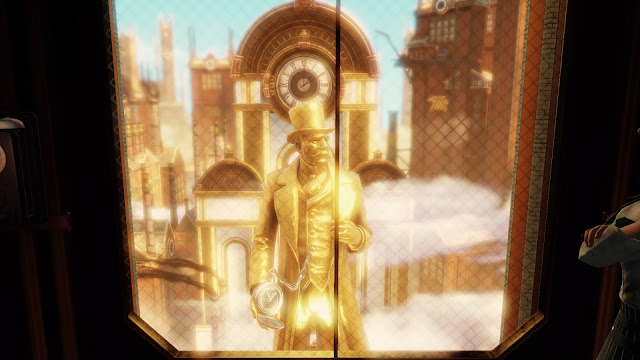 Finkton is the place where we get to see how the other half live. As you approach the slums of Shantytown, you see the strictly regimented life of Fink's workers. A giant clock tells the workers when it is time to work and when it is time to sleep. Workers are paid in tokens that can only be redeemed in Fink's establishments, supposedly because he hates to see his men receive lackluster products for their hard earned cash. Most of the Vox Populi's story is established in Finkton. We meet Daisy Fitzroy who employs Booker to arm her outfit. We see with our own eyes, the poverty and hell that the lower class has to stomach. "Labour agitators" are put in stocks and food acquired from the Vox Populi are locked up in public, in full view of hungry people. While the environment of Shantytown is less salubrious than that of central Columbia, it still retains the otherworldly beauty seen throughout Infinite. This was allegedly a bone of contention between Ken Levine and his art director Scott Sinclair. Levine felt that everywhere should be beautiful in Columbia, even the slums. I think Levine was correct. These people did not have the capacity to not make something heavenly. 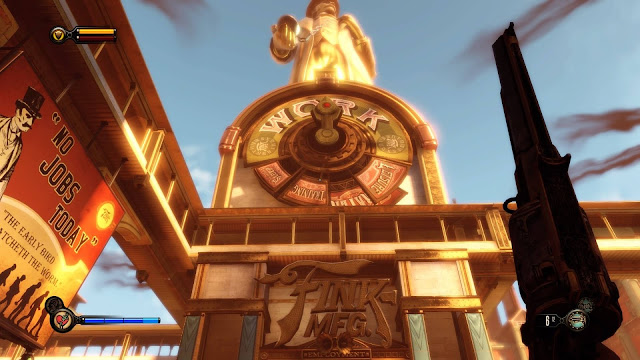 Finkton is the only time that the game drags a bit. There are too many back and forth trips to Chen Lin's gunshop for one, with multiple battles taking place in the same environment. This could have been easily cleared up with some tighter editing. There is still however a hell of a lot to love about Finkton. It has probably the best single fight in the game, when you face down the Vox Populi army, replete with a Handyman, the game's most dynamic and interesting enemy. You also get a hold of probably the best weapon in the game, the Dirty Harry like Hand Cannon. It also has one of the most surprising and touching moments in the game, where Booker and Elizabeth play the song Will The Circle Be Unbroken. Finkton is the beating heart of Columbia. As Andrew Ryan would put it, it is off the sweat of their brows that the Columbian project is built. Ryan would not be happy that their work is not repaid in appropriate compensation. 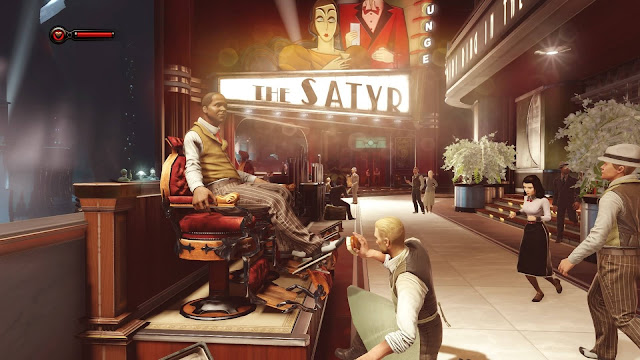 This gets to an interesting discussion about the philosophical differences between the cities of Rapture and Columbia. Where as both descended into civil war and chaos, one is clearly superior than the other in terms of its driving philosophy. In Rapture, race, gender, class or sexuality don't matter. You are just as likely to succeed if you have the drive, commitment and talent that sets you apart from your peers. Ayn Rand's libertarian outlook has many problems with reality, but it still sets out some truly pleasing ideas about individualism and meritocracy. Columbia meanwhile is built from the worst ideas about race and class that remain an issue in America and elsewhere today. If I was going to live in one city, I would go for Rapture every time. In the next part of Why I Love Bioshock Infinite, we will discuss the game's later areas, Emporia, Comstock House and the Hand of the Prophet, as well as the game's brave and powerful ending.