Why I Love L.A. Noire 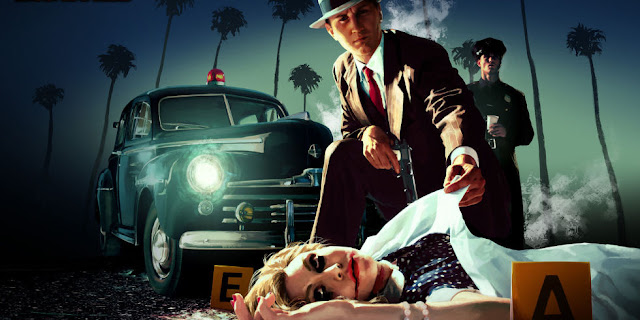 "The city on the verge of greatness. A new type of city, based not on the man, but on the automobile. The car, symbol of freedom and vitality. Where every man can own his own home and have room to breathe and not be overlooked by his neighbors. A city where a man's home is his castle. A quarter acre of the dream made possible by the victory. A city of opportunists. A city of dreams where Hollywood will shape the thoughts and desires of the entire planet. A city of pioneers. A city of dreamers. A city of undercurrents, where not everything is as it seems. A twentieth century city that will become a model for the world. A city that has no boundaries, that will stretch as far as the eye can see."

L.A. Noire was released in 2011. It was my favourite game of that year, and one of my all time favourites today. I love Noir, as you know, so this was always going to be a game which held much joy for me. More than liking the genre and subject matter however, the game really made me feel like a detective, collecting clues and mastering my interview technique. L.A. Noire is heavily influenced by the work of James Ellroy, in particular The Black Dahlia and L.A. Confidential. By putting Ellroy's work in a context of a game however, it transforms it and turns it into something new. This is not plagiarism, this is a loving tribute to one of the true greats in Noir.

One of the standout elements in L.A. Noire is how it introduces real, honest to goodness acting to video games. The facial scanning technology got a lot of press, and for good reason. Aaron Staton plays the lead Cole Phelps, and shows just as much talent as he did in his other famous role Ken Cosgrove, in the brilliant Mad Men. Staton plays Phelps as a straight arrow, caught up in the unbelievable corruption and twisted morality of mid 20th century Los Angeles. The story takes him through many compelling, intriguing cases, including the famous Black Dahlia murder. Through the painstakingly precise recreation of Los Angeles, and the many interesting, secretive characters, you are put in a place and time that is seriously unusual for modern video games.

The gameplay combines simple but largely competent combat and driving with clue gathering and interrogations. It is the latter two that give the game its unique flavour. Some people found the interrogations to be confusing and unwieldy and to be honest I did, at first. Once I cracked it though, I started getting full marks for my interviews. There is a skill to it, something brilliantly shown through the facial scanning technology. If somebody looks untrustworthy, they probably are. L.A. Noire is essentially a reboot of the old point and click adventures, offering up puzzles through how you choose to deal with a witness or suspect. It is, all credit to point and click adventures, though a unique experience in modern gaming. Through the use of technology, L.A. Noire crafts a story and game that stands out from the crowd. It is just as compelling and unusual as say something like Her Story, which also made for a great detective game.

The story of L.A. Noire and its many character portraits are where the heart of the game is. It tells a familiar, but no less compelling for it, tale of corruption, of forbidden love and of base pursuits. Through the interview mechanic, you understand characters you encounter in a much deeper way than usually seen in the medium. The details in the crime scenes also help build an interesting picture of who lives in this world. When you investigate the murder of a woman, you search through her belongings, a sad collection of photographs among other things. Her alcoholism and homelessness is driven home and you feel a powerful need to see the murderer come to justice. The game is full of details like this.

As you proceed through the game, you go through many different areas of investigation, starting with Patrol, which is where you are familiarized with the rules of the game. You then go through Homicide, Vice and Arson. Vice is the standout of the game, with a Kevin Spacey in L.A. Confidential inspired character as your second. It is here that the corruption inherent in mid 20th Century Los Angeles, becomes explicit and you have to make choices about whether you want to be a part of it. Phelps does not want to be part of it, so sacrifices his ascendant career for honest police work. L.A. Noire has just as much to say about the unique quality of Los Angeles and American society as say Chinatown did. It borrows from the best and it has its own worthy approach on top of that. Putting emphasis on the place of the car in making L.A. the first truly modern city, is an interesting opening gambit and one that pays off in big bucks later on.

L.A. Noire has some issues, mostly around the combat and driving sections, which are nowhere near as dead on as the Grand Theft Auto games, say. It also has a steep learning curve which can put off some more meek hearted fellows and gals, who end up believing that the game's choices around right and wrong interview technique are random. The world, while beautiful and expertly laid out, is also surprisingly empty outside of the story missions. There isn't much reason to explore the city, once you have completed the story. Dialogue is repeated again and again by street NPCs, with none of the verve or variety of Rockstar's games. As someone on Slate once said though, getting overly angry about this is the same thing as crawling around a cathedral, with your face in the dirt, and complaining about the architecture. In context things become compelling in a way that is unique and electrifying.

L.A. Noire has a beautiful, dark heart. It takes all of the conventions of the genre and delivers a game that manages to do them justice in a way that, through its medium, surpasses the immersion to be found in cinema or literature. Here, you are in the world, neck deep and drowning. Yes, it had its problems but what it did right, is like something that I have not seen before or since. I hope that Rockstar takes seriously its duty to follow up on the game with the polish and long earned world building perfection that it deserves. Through putting the player in a Noir world, you become seriously invested and involved in the story being told. It's a sad story of crooked people doing crooked things. It has a poetry to it that would make James Ellroy, Raymond Chandler or Elmore Leonard proud.