Why I Love Ed Wood 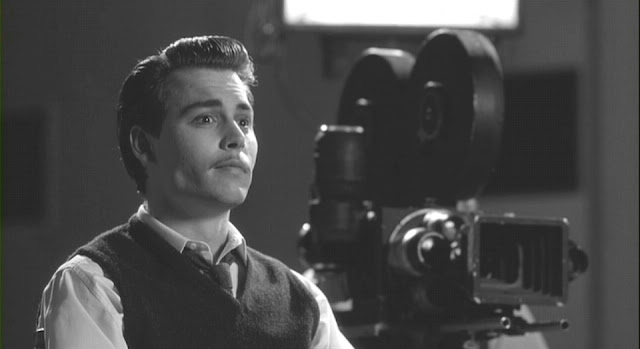 "Visions are worth fighting for. Why spend your life making someone else's dreams?"

Ed Wood was a bad film maker. It's best we get that out of the way. That doesn't mean however that what he made had no value. His passion more than made up for his lack of talent. Take a look at the cult classic Glen or Glenda, and see a genuinely brave movie about transgender identity. Sure it's badly made but its sheer heart should not be underestimated. Ed Wood, by Tim Burton, expresses everything laudable and inspiring about the man himself. It is, along with Singing In the Rain and The Aviator, one of the greatest movies about movies that has ever been made. And not just movies either, but all Art. Burton hasn't really been on fire lately, with the exception of the brilliant Big Eyes - not coincidentally also written by Scott Alexander and Larry Karaszewski - but his early to middle work is quite extraordinary. Ed Wood is the greatest work of his career.

Let's start with Johnny Depp's performance, because wow is it good. He plays Ed Wood as an eternal optimist, someone who doesn't let life get him down for too long. The scene where he meets his hero Orson Welles is so touching and inspiring. (A piece of trivia: while Vincent D'Onofrio plays Welles, the voice is done by veteran voice over artist Maurice LaMarche.) Johnny Depp has been in eight Tim Burton films but this is the one he'll be remembered for. You just can't be depressed when you are watching Depp here. He is a hero to me, and I think one of the best actors of his generation. He is so damn positive and full of the joys of life, even when he has obstacles to overcome. Passion beats lack of talent any day of the week. Those who show up and get the work done are superior to those who mull over every decision with uncertainty and fear.

Martin Landau, who recently passed, is the second most important performance in the movie and one that he won the Academy Award for Best Supporting Actor. The relationship between Ed Wood and Bela Lugosi is sweet and remarkably emotionally satisfying. Landau plays Bela as a forgotten star, someone who's best days are firmly behind him. He loves Ed's passion and his adoration of Bela's work. To Ed Wood, movies are holy. His obsession with Orson Welles and how he was only twenty five when he made his masterpiece Citizen Kane is something that I relate to. You look at how great these people were right out of the gate, and how you have struggled and failed to make an impact on anything or anyone and you're already thirty. I think this is one of the secrets of the success of Ed Wood.

Everybody can relate to wanting and needing to do something but not having the skills to pull it off. I mean, I would love to write a novel, but I'm shit at it. That desire is in me though and will likely never go away. Writing articles about things I love is all well and good, but what have I actually accomplished? As John Candy says in the classic Planes, Trains and Automobiles,
"When I'm dead and buried, all I'll leave behind are some shower curtain rings that didn't fall down. Some legacy, huh?" Ed Wood, while he may not have been terribly gifted, still created something from start to finish. He made a difference, even if it was just to those people who he loved. He gave them meaning and purpose, where they would have otherwise have been chewed up and spit out by the Hollywood machine. He was their champion and hero, and after watching this movie, he will be yours too.

Ed Wood is unusual for how it portrays the fluidity of gender. Ed Wood self-identifies as a transvestite, saying that it makes him feel closer to women. I love the scenes where he is trying to get funding for Glen or Glenda and how he tells George Weiss, played by the great character actor Mike Starr, why he is uniquely qualified to direct the picture. Glen or Glenda is replicated with great care from Burton, who understands the movie's particular heart and beauty. I love that Ed Wood expresses gender identity that is not binary and restrictive. It's not an in or out scenario. You can be a woman in the body of a man who loves women. I imagine that Ed Wood has given many people hope that they too can be themselves, no matter what society tells them.

Ed Wood's best known work, and his masterpiece, is Plan 9 From Outer Space, a true cult classic that is as memorable and enjoyable as other similar cult hits like the Rocky Horror Picture Show. It understands camp in a deep way, and why something is so bad that it's good. The premiere of Plan 9 is the movie's ending, and leaves the audience with a hopeful, positive message that anyone can live their dreams, if they just have the courage to see it through. While Ed Wood would end up not doing anything else that received the attention of Plan 9, he did his best and should be appreciated for that. The scene in the rain where Ed and Kathy drive off to get married is one of the most touching moments in the film, and makes me feel all warm and good every time I see it. Kathy would stay with Ed until his death in 1978.

Ed Wood is then a film that will inspire generations to get out there and follow their dreams. It is a story about why drive, commitment and passion will overcome any shortcomings in the talent department. There are those who love things that mock camp/badly made movies. These movies want the joke to be on the other person. People who make truly camp things though are the originators of why these things strike a chord in us. Ed Wood should be praised for his natural camp genius. The film should be played in every school, college and any other outfit of learning to show why it is that someone who had no right to be a film maker achieved his dreams. And you can too. Trust me.