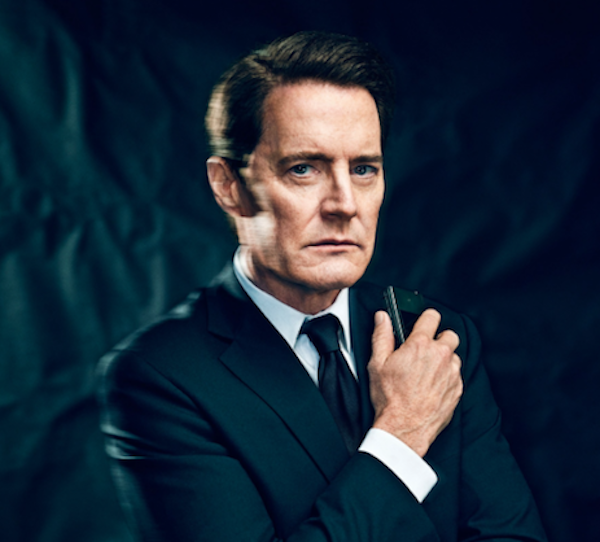 So it finally happened. Coop has returned to us. Some thought it would never happen. Some doubted Lynch and Frost's sincerity that Dougie Coop was a character that they loved and who they wanted us to love. Some very foolish people thought he was, sigh, "trolling" the audience. (Seriously, don't make me write that word again.) Always bet on David Lynch. He never lets you down in the end. As the faithful correctly predicted, the long spiritual journey and odyssey of Dougie Coop resulted in the return of Special Agent Dale Cooper. The return of Coop marks the time when Twin Peaks became the greatest show ever on TV, and up there with the best films of all time.

Feet don't fail me now. Take me to the finish line. All my heart, it breaks every step that I take but I'm hoping that the gates, they'll tell me that you're mine. Walking through the city streets. Is it by mistake or design? I feel so alone on a Friday night. Can you make it feel like home, if I tell you you're mine? It's like I told you honey don't make me sad, don't make me cry. Sometimes love's not enough when the road gets tough I don't know why. Keep making me laugh, let's go get high. Road's long, we carry on, try to have fun in the meantime. Come and take a walk on the wild side. Let me kiss you hard in the pouring rain. You like your girls insane. Choose your last words. This is the last time 'cause you and I, we were born to die.

Special Agent Dale Cooper is the most important character in Twin Peaks. He is the heart and soul of the show. I think it is certain that Dougie Coop's spiritual journey of rebirth will go down in history as the most daring, incredible story of the medium. To get back to yourself you must fearlessly walk like a newborn, experiencing life as all babies do: without fear or prejudice. Dale Cooper has returned to us and will now be combating the evil that Bad Cooper has been inflicting on the world. I don't think there has ever been a better moment in TV than the return of Coop. We all worried that, as much as we loved Dougie Coop, we wouldn't see good old Coop again. Well, we needn't have worried. Here he is. As pure and goodhearted as ever and ready to lead a war against all of the evil shit in the world.

Coop was established early on in the original Twin Peaks as an idiosyncratic, but lovable sort. Coop is someone who you would want in your life. As a partner, as a lover, or as a father guiding you down the right path. The return of Coop was out of prophecy. If you had faith in your heart that things would happen, in spite of all the cynicism and doubt around it, you were rewarded on Sunday with one of the most emotionally compelling, devastating and beautiful moments in the history of television. The greatest moment in any David Lynch film or series. When he returned and said 100% and then I AM THE FBI! it was pure magic. It was proof that the faithful are rewarded where as the doubters will forever be in the wilderness like Jerry Horne. It meant so much to me to see Coop return. It was powerfully close to witnessing the rebirth of a loved one. I recently lost my father and the night before Coop returned, I had a dream where he came to me, side by side with Cooper. They both put their hand on my shoulder and told me "Everything will be okay." And now I know it will be. It is a spiritual experience, something deep and real and true. It is waking up and opening your eyes to the possibilities of life.

Coop's return wouldn't have been so emotionally complex and exciting if Dougie Coop's trials did not exist. Lynch and Frost knew that to come back to life, he must endure a series of tests to see if his soul was still pure. After 25 years, you can't just waltz back into life. It is a spirit journey, and one must combat all of their doubts and fears to get back to the life they once had. Dougie Coop is one of the great creations of the new Twin Peaks and there was supreme satisfaction to be found in the realization that Coop was always conscious as Dougie. He did indeed understand and process everything, but as a newly born soul. The scene where he said goodbye to Janey E and Sonny Jim was one of the most touching of anything I've seen. I love his line about the Mitchum Brothers having hearts of gold. Yeah, they are gangsters but they're not evil. They have a moral compass and understand that they owe a debt to Coop and Dougie Coop.

Some words have to be spent on the sheer hilarity of episode 16. The death of the married hit people was shockingly violent but full of humour. To get killed by a disgruntled accountant with an Uzi? Pretty damn funny. And of course the Mitchum Brothers words, "What the fuck kind of neighbourhood is this?" "People are under a lot of stress Bradley." The line from Mike in the Black Lodge, where he expresses everyone's relief that Coop is finally back. "Finally." He was speaking for the audience, but not in a way that degenerates the brilliance and immensely rich character moments with Dougie Coop.

Coop is to me a guide, and a protector, and a father. Someone who would stand by you through anything. He is the one guy who I would go to in a crisis because I know he would keep me safe from the evils in the world. He is played so spectacularly well by Kyle MacLachlan, and written with such verve and wit and heart by Lynch and Frost, that it makes me sad that anyone, anywhere, anytime could doubt that THIS is the greatest TV show of all time. It smashes up all contenders for its sheer, incredible creativity, ideas that spring from the purest recesses of the brain and collide into reality, forever altering and shifting it into a dream world where the impossible becomes possible. Breaking Bad? Forget it. The Wire? No comparison. The Sopranos? Not even close. Even something I adore like Lost has to bow down to the new King of the medium. I am so full of joy that Coop has returned. He makes my heart light and happy. He makes me believe in the impossible, and the unlikely. He fills me with trust and faith in the goodness of humanity and life. Good to see you Coop. I hope you stick around for a long, long time.