Why I Love House of Balloons 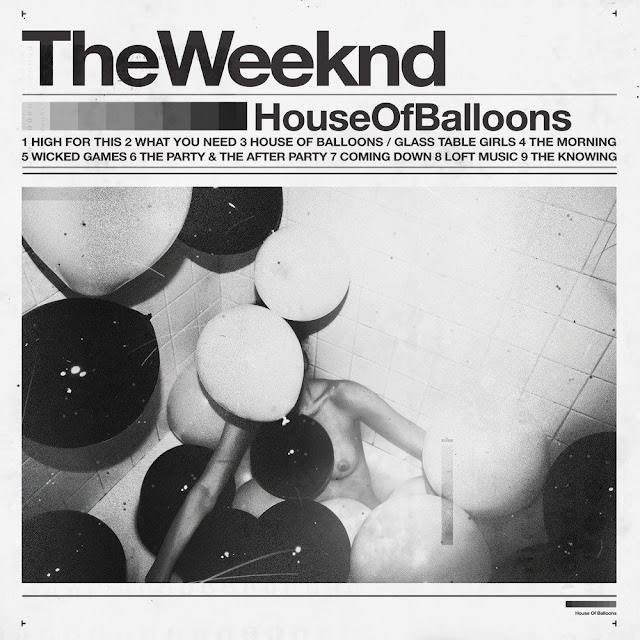 "From the morning to the evening

Noir R&B is concerned with many of the same things as the R&B that preceded it - sex and love being the two major elements - but the tone in which it expresses and examines these is bleak, melancholic and frequently terrifying. Drugs have long been a staple of Rock music, but R&B had traditionally steered away from them in songs. "Cause it hurts to breathe, open the window. Oh, your mind wants to leave but you can't go." Lou Reed would be familiar with the kind of place that drugs occupy in Noir R&B: a way to exist in a harsh world that has little feeling for the pain of being alive. While I have argued that Novacane by Frank Ocean is the defining song of Noir R&B, House of Balloons is definitely the defining album. Every single song on House of Balloons is golden, shadowed and devastatingly beautiful.

Let's start with The Party & The After Party, tied with The Town from Kiss Land and Try Me from My Dear Melancholy, as my favourite song on House of Balloons. Featuring a sample from Beach House's Master of None, it is as Noir as any song in the new R&B.

"I understand your body wants it
I know your thoughts
Oh you 'bout it, 'bout it
You're a big girl and it's your world
And I'ma let you do it how you wanna
Girl alright baby, right baby
I know you know I know you wanna wit it
Don't be shy baby, I'll supply baby
I got you girl, oh I got it girl
With your Louis V bag
Tats on your arms
High-heel shoes make you six feet tall
Everybody wants you, you can have them all
But I got what you need
Girl I got your bag, I got it all
Hold your drink baby don't you fall
Be there in a minute baby just one call
You don't gotta ask me
You always come to the party
To pluck the feathers off all the birds
You always come to the party
On your knees
I will not beg you please."
The chorus of the first half of the song is melodically sublime, and the performance always gets me. The song is about the joy to be found in finding a beautiful woman to sleep with, but also the dark side of mindless sex. "Ring tone on silent, and if she stops then I might get violent." This is In a Lonely Place, the capacity for violence against women always possible. Some people mistakenly believe that The Weeknd is condoning this violence in his music, but that is to entirely misunderstand his art. As he said in 2013 in an interview with Complex Magazine, AKA'd as my favourite online music site, this is some WWE shit. He is playing the role of the villain here, not necessarily reflecting his own life. He is exploring toxic masculinity in a way that few have the courage to do. He is the anti-hero. He is Robert DeNiro in Taxi Driver, and embodies that role in just as a method based fashion as DeNiro did all those years ago.
"I got my heart right here. I got my scars right here." Wicked Games is along with Novacane, destined to be remembered in 50 years when people look back at the start of the most artistic and compelling musical genre of the 21st Century. The melancholy of this song is overpowering. It is a lament to the wasted life and to the love that never stays around long enough to make a difference. "Even though you don't love me..." Whenever I would introduce people to Abel Tesfaye, AKA The Weeknd, I would play them this song, in particular the live version on Jools Holland. It immediately lets people know who The Weeknd is and why his music is so powerful.
The Morning is the one optimistic song on the album, even though it definitely brings the melancholy too. The song was originally recorded in a far inferior, more sluggish form with ousted producer Jeremy Rose. The version that appears on House of Balloons and Trilogy is vibrant, joyous and with hooks for days. "All that money, the money is the motive. Girl put in work. Girl put in work." Many people are frustrated that The Weeknd allegedly doesn't record and release songs like those on House of Balloons (which is not actually true), but what I most wanted from Abel was to do more songs like The Morning. On his last three projects, he gave us more purely joyous songs in this style, particularly True Colors, Try Me and most recently the stunning Summer single, and play on House of Balloon's What You Need, What You Want by Belly.

What You Need originally had a sample of Aaliyah's Rock The Boat, which was unfortunately removed due to not being able to clear it for Trilogy. It remains a gorgeous song nonetheless. The insight into masculinity on this song and the album is on another level. It's not that the singer can't love, but that the world in which he inhabits is so hostile to love that to protect himself, he needs to be on his own. The Weeknd expresses a certain kind of masculinity that feels the need to be in control, even while fully aware that they are the least in control of anyone. The illusion of control over women gives a feeling of certainty in a life that is anything but. Loft Music gets my shout for the most underrated on House of Balloons. The first three minutes would make a hell of a single. "What you doing in the bathroom? I hear noises in the bathroom. Baby, it's okay. We can do it in the living room." Coming Down... "I always want you when I'm coming down." All of those late night texts and phone calls and the need to see a woman who you really shouldn't. This song is so low that it makes me cry; the longing and need to be with someone is more than I can bear.
House of Balloons is a snapshot of a world that exists for us all in some fashion, which is why, in spite of its excess, it is - to contradict Kiss Land - something to relate to. Even if you have only in small part experienced substance abuse and careless sex with near strangers, the motivations behind the actions described on House of Balloons are familiar. It is one of the most important, influential and artistically sublime works of art of the 21st Century, and did more to progress R&B than almost anything of the last decade. "I got you girl, oh I got it girl..." Those who work in Noir R&B today, from Miguel, Frank Ocean to relative newcomer Gallant - the artist behind the best album of 2016 - no-one is on the level of The Weeknd, for consistency and vision. He is truly the Michael Jackson of our times, and House of Balloons remains today, seven years since its release, the defining work of Noir R&B.