I first read Calvin and Hobbes when I was young. I discovered the comic strip in my Nanny's house. It had been a present given to my aunt by a boyfriend who thought it was hilarious that she had the same last name as a cartoon tiger. Calvin and Hobbes is one of the funniest, most touching comic strips of all time. It also increased my vocabulary ten times over, with a deliriously entertaining high brow terminology used to express Calvin's dissatisfaction with people's lack of understanding of his genius. I particularly loved the many art criticisms of children's snowmen. While Calvin and Hobbes is extremely witty and funny, it is its heart that marks it out as perhaps the greatest of all comic strips. It prizes imagination and a love for life above all else.

Calvin and Hobbes was drawn, written and coloured by Bill Watterson, a semi-hermetic sort who always shied away from publicity and interviews. His only real discussion of Calvin and Hobbes came in the tenth anniversary book released in 1995. One of the things I admired most about Watterson was his insistence that Hobbes was not merely the product of Calvin's imagination, he was as real to Calvin as anything else. I find it strange and annoying when people try to pin down Hobbes' reality in a literally minded way. He is, from Calvin's perspective, just as real as anything. Others' inability to understand in Calvin's world, are simply not getting it.

Calvin and Hobbes was something that I collected through the 1990s, and most recently in 2005 when I purchased the gorgeous complete Calvin and Hobbes. It was, I remember, one of my first passions and something that still makes me happy all these years later. Calvin and Hobbes had many characters that populated its world. One of my favourite side characters was Susie Derkins, who Calvin couldn't quite understand, and who was the opposite of him in many ways. Bill Watterson said that he based Susie on his wife, and expressed that at some stage in the future Calvin would most likely marry her too.

The sheer imagination of Calvin and Hobbes is what really sets it apart. There were many different seemingly impossible things that happened throughout the strip's history. Spaceman Spiff is one of the best of these flights of fancy. Spiff's adventures always coincided with some real life hassle or anxiety, with Calvin finding a way to resolve these issues with the power of his mind. 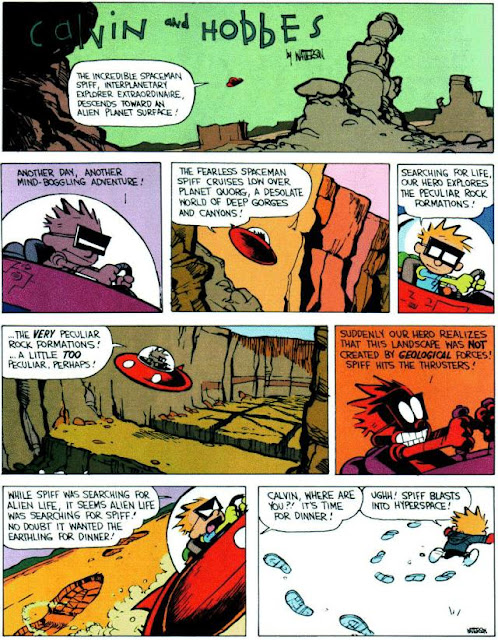 I also really enjoy the Noir character Tracer Bullitt, which is to be expected due to my never say die love of the genre. Watterson really understood how to pull humour out of the hardboiled dialogue. I do wish that Watterson had done more of these, as they are among my very favourite in the entire run of the strip.

Let's talk about Hobbes. He is the spirit and embodiment of everything good about cats. I adore the moments when he returns to natural cat behaviour. Hobbes reminds me very much of our cat Schmuckers, who also had moments of human like behaviour combined with extremely feline activities. Schmuckers used to get angry on occasion and would run up and down the side of the sofa with his claws out. We called this the luas line, after Dublin's public transport outfit. Hobbes is always there for Calvin, and makes the worst of times better because of his big heart and animal insight into life and death.

If you have young kids, or if you just want to read one of the most consistently hilarious and touching comic strips, you owe it to yourself to buy The Complete Calvin and Hobbes. It will touch your heart and it will make you chuckle through even the most terrible times. We could all use a respite from this frequently harsh and unbearable world. Calvin and Hobbes will live for as long as there are comic strips.