Why I Love Tangled Up In Blue 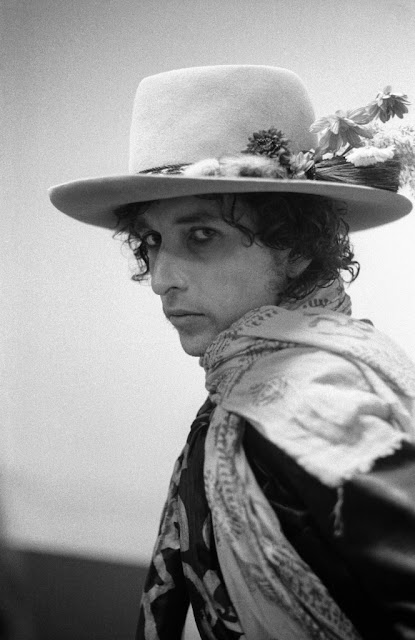 "Early one morning the sun was shining
He was laying in bed
Wondering if she'd changed at all
If her hair was still red.
Her folks they said that their lives together sure was gonna be rough
They never did like Mama's homemade dress
Poppa's bank book wasn't big enough.
And he was standing on the side of the road
Rain piling on his shoes
Heading out for the old east coast
Radio blasting the news
Straight on through
Tangled Up In Blue.

She was married when they first met
To a man four times her age.
He left her penniless, in the state of regret
It was time to bust out of the cage.
And they drove that car as far as they could
Abandoned it out west.
Splitting up on a dark sad night
Both agreeing that it was best.
She turned around to look at him
As he was walking away.
Saying I wish I could tell you all the things
That I never learned how to say.
He said "That's alright baby, I love you too.
But we were Tangled Up In Blue."

He had a steady job and a pretty face
And everything seemed to fit.
One day he could just feel the waste
He put it all down and split.
Then he drifted down to New Orleans
Where they treated him like a boy.
He nearly went bad in Baton Rouge
He nearly drowned in Delacroix.
But all the time he was alone
The past was close behind.
He had one too many lovers and
None of em were too refined
All except for you
But you were Tangled Up In Blue.

She was working in the Blinding Light
And I stopped in for a drink.
I just kept looking at her face so white
I didn't know what to think.
Later on when the crowd thinned out
I was getting ready to leave.
She was standing there right beside my chair, said
"What's that you've got up your sleeve?"
I said "Nothing baby and that's for sure."
She leaned down into my face
I could feel the heat and the pulse of her
As she bent down to tie the laces of my shoe
Tangled Up In Blue.

I lived with them in Montegue street
In a basement down the stairs
There was snow all Winter and no heat
Revolution was in the air.
One day all of his slaves ran free
Something inside of him died
The only thing I could do was be me
And get on that train and ride.
And when it all came crashing down
I was already south
I didn't know whether the world was flat or round
I had the worst taste in my mouth that I ever knew
Tangled Up In Blue.

So now I'm going on back again
Maybe tomorrow, maybe next year
I gotta find someone among the women and men
Whose destiny is unclear
Some are masters of illusion
Some are ministers of the trade
All under strong delusion
All in their beds unmade.
Me I'm still heading towards the sun
Trying to stay outta the joint
We always did love the very same one
We just saw her from a different point of view
Tangled Up In Blue."

I love every version of Tangled Up In Blue. I love the original session from New York. I love the released version on Blood On The Tracks. I love the live version from the Rolling Thunder Revue. Most of all though I love the version from 1984's Real Live. It is a testament to Dylan's uncanny skill at reinventing old songs. He takes lyrics that were entered into legend and turns them and twists them into having new meaning.

This version of Tangled Up In Blue was the one my mother and father heard when Dylan played Slane Castle in 1984. It was the song I played for my father hours before he died. I will always think that the last line, "We always did love the very same one, we just saw her from a different point of view," captures exactly the love that Noel had for Mary, even as some people try to rewrite the past. Yes, my parents loved each other. That is how I was born. And my mother was as important a part of his life as anything. You have to be a heartless, insecure soul to deny that.

Tangled Up In Blue is a story about the many places that love goes in a life. The Real Live version has the best lyrics of any Bob Dylan song. Take this verse:

"She turned around to look at him
As he was walking away.
Saying I wish I could tell you all the things
That I never learned how to say.
He said "That's alright baby, I love you too.
But we were Tangled Up In Blue.""

This is every goddamn reason why you love someone. I could have said it but I didn't. I love you. I love you more than anything. The song is in many ways a travelogue of experiences that Dylan had through his life. Or if you are being particular, the lives of his many characters. It is the greatest song Dylan ever put to record. It has as much lyrical complexity as Stuck Inside of Mobile With The Memphis Blues Again, and as much heart to it as The Sad Eyed Lady of the Low Lands. And the performance! Good God, the performance! Dylan was never better at expressing low down and beautiful feeling. He proves again and again on Tangled Up In Blue that while he may not be a pretty singer, he is a powerful singer.

A large part of why I love the song so much can be expressed in my desire to perform it. I wish I had the courage to have played the song at my father's funeral. A guitar, a harmonica and a photographic memory of the different lyrical changes. It could have been something special. If I ever get up the courage I would love to sing this song for Noel. I played it for my first girlfriend and I played it for my most recent romantic sort. It will always be dear to my heart. If a woman you're with loves it just as much, surely that is as good a reason as any to stay with them.

Tangled Up In Blue soars, where others plod. Your life is this song. Your life is exalted in ways you could never imagine. It is an overwhelming tale. All the twists that push a low down life into a high up, on top life. "She never escaped my mind..." Take the verse about the strip joint and see how Dylan turns the grimy into the heavenly. Contrast is his goal and unbelievably on point contrast is what he gets to. The pure, holy beauty of this woman and the pornographic life she leads. This is not a sermon though, or a "You shouldn't be doing that" song. This is a celebration of all the many ways that one leads a life and the ways that love is found.

This is a song for a revolution. Not a tawdry, militaristic revolution but one that places love above all else. "Getting through, Tangled Up In Blue." It is a marvel of a song. It is an astonishing achievement in song writing. When I brought my first girlfriend to meet Noel, we were sleeping together pretty much every day. I remember how shocked Noel was by this. Also, I learned how proud he was of me, to break through the shit that every Casey has to go through and to achieve a wondrous love from someone who was undeniably better than me. We would sing Dylan til late at night. We would sing Tangled Up In Blue. I still do.