Why I Love Blue Velvet 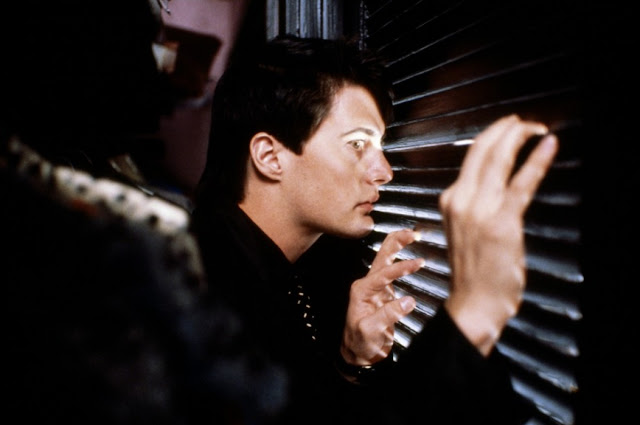 Blue Velvet is a movie about the hidden perversions and horrors hiding in plain sight underneath an idyllic surface. It is a movie that establishes many themes that would crop up again in Twin Peaks, Fire Walk With Me, The Lost Highway, Mulholland Drive and INLAND EMPIRE. This is particularly true of Twin Peaks which Blue Velvet was in many ways the prototype for, and not just because they both starred Kyle MacLachlan. David Lynch is interested in the perversion that lies behind a pristine facade, and how evil can fester in even the most "normal" of places. It is the story of an innocent who becomes seduced by the dark side of life. Whether he will survive his odyssey and return home intact is never sure, until the final confrontation with Frank.

Frank Booth is surely one of the best villains in cinema. Dennis Hopper has all the volatility and menace that the role requires and turns in the best performance of his career. "Baby wants to fuck!" Such depravity, and such commitment from Hopper to a truly nasty character. Frank has kidnapped Isabella Rossellini's husband and child, and is using her as a sex slave, to fulfill all of his depraved desires. The scene where Frank rapes her is one of the most intense and unsettling in film history, all the while MacLachlan is hiding in the closet, getting more than a bit of a sick thrill from it. This voyeurism and need to understand why such evil things happen is what drives MacLachlan's character across the line and into a new, terrifying world.

Roger Ebert got it terribly wrong with his review of Blue Velvet, complaining that the film didn't go deep enough into its dark corners. I genuinely don't know what movie Ebert was watching, as the film is distressing and compelling from start to finish. It has so much to say about self-loathing, masochism and sexuality. Sexuality is something that can be benign and loving, or something dangerous and destructive, because it is one of our most primal drives. Here David Lynch contrasts the sweet love between Kyle MacLachlan and Laura Dern, and the emotionally wrenching need of Isabella Rossellini to be dominated and abused. Both come from the same basic human need, and yet are world's apart. That line between them is blurred and uncertain. Surely something as beautiful as a kiss can't be evil right? Well, you're not so sure after watching Blue Velvet.

Laura Dern's performance, while low key, is pitch perfect. She expresses so well the naive optimism and beauty of youth, even when confronted by such terrible evil. As previously mentioned in Why I Love Dougie, I just can't fathom how people can say that David Lynch hates women. He has made three movies with Laura Dern, Blue Velvet, Wild At Heart and INLAND EMPIRE. The latter is perhaps the most complex and demanding performance I have ever seen. She gets to so much truth that is hidden from most human beings. The other great female performance in the film is from Isabella Rossellini, who has to go through some seriously degrading scenes. Yet, she is still the bravest character in the film and someone who has confronted her demons head on. To confront such dark and bleak things is not easy. We should not assume that just because the subject matter explores immoral acts, that the picture itself is immoral. Women are a source of power for Lynch, and the way he views them as being the strongest, most heroic characters in his work, should be a sign of the great respect he has for them, as human beings and as artists.

Kyle MacLachlan is the innocent, and plays it so sublimely. The scene where he cries in his bedroom, after beating Rossellini, at her request, is powerful. You can feel the conflict he has in his soul, and the fear that what he has done cannot be undone. It is easy to see why Lynch chose MacLachlan for Twin Peaks. Everything in Agent Dale Cooper - his optimism, his love of life and his ability to go into hell for the ones he loves - appears here with Jeffrey. That the film has a (mostly) happy ending is the reward for the hell the characters went through. I compare it to the end of Fire Walk With Me, where Coop stands beside Laura Palmer and comforts her. A happy ending doesn't mean that the film isn't dark Ebert, and it doesn't diminish the abhorrence committed or the deep insight into human behaviour.

A few words have to be said about the use of the Roy Orbison song In Dreams. I don't think any musical moment in a movie has topped this one for its supremely unnerving quality, while still being otherworldly and drop dead gorgeous. "A candy coloured man they call the Sandman..." It takes you into that other place and enraptures you, as much as it unnerves. The song Blue Velvet, which also has a prominent place in the movie, Lynch has said, was something that he had previously disregarded as syrupy schmaltz. Here Lynch takes the dark, melancholic undercurrent and pushes it to its extremes.

David Lynch made two great movies before Blue Velvet, in Eraserhead and The Elephant Man, but it is in Blue Velvet that he fully established the subject matter and themes that would define his work of the 90s and 00s. It is a remarkable picture that bears re-watching. It holds up as fresh, disturbing and intriguing watching. It is a powerfully sensual film, and may make you feel uncomfortable with your own sexual urges, just as it does for the characters. Watching a film about the dark side of the life can lead to greater understanding about your own darkness and capacity for evil. It is one of the truly great Neo-Noir films.