Why I Love Field of Dreams 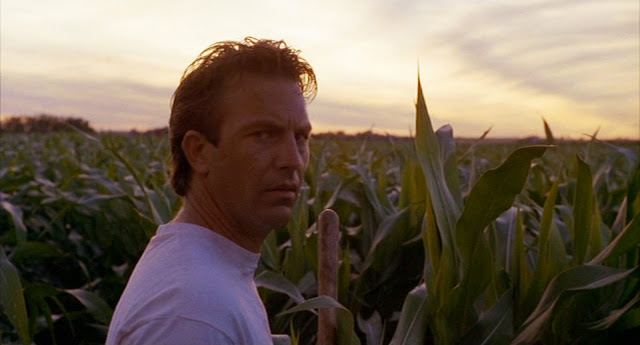 The "he" in the quote above is not Shoeless Joe Jackson but the father of Ray Kinsella. Field of Dreams is a movie about how through unspecified, supernatural means, a father and son can put aside their differences and make peace with one another. It is a movie introduced to me through my mother and father who both loved the touching message of the film. I don't really like to call myself spiritual (let alone religious) but when I watch Field of Dreams, that's how I feel. It is a magical film, with five superb performances from Kevin Costner, Amy Madigan, James Earl Jones, Burt Lancaster and Ray Liotta, who plays the elusive Shoeless Joe Jackson.

Director Phil Alden Robinson weaves a tale about an unenthusiastic farmer who is given a message by a mysterious voice to build a baseball field in his corn. Perhaps looking for any excuse to not become a farmer, Ray Kinsella readily takes on this mission with passion. In his heart he has missed his father for many years, sorry for how things were left between them. I relate to this. I lost my father some months back to a lung disease and I have constantly felt like I needed to talk to him. To make things better between us. To get over our disconnect and to become closer. We loved each other, but we didn't always see eye to eye. I feel so much regret in my heart for how I let him down over the years. I hope that I will be able to meet him some day again and to make peace.

Field of Dreams is a movie that, while clearly out of this world on reality's terms, is something that is eminently believable. There are no false notes. No implausibilities stretched to breaking point. You believe in the characters and why they do the things they do. James Earl Jones, based clearly on illusive writer J.D. Salinger, is particularly real. Fed up with the endless adoration and cult like obsession, he has become a recluse, unwilling to engage with the world. The funniest moment in the film is perhaps when Ray Kinsella asks Terrence Mann what he wants when they get to the baseball stadium. Mann replies with all the indignation of a spurned high school teen, that what he wants is to be left alone, to stop people coming to him for answers. After this tirade, Ray clarifies: what do you want to eat? So funny, so on point.

Burt Lancaster is also excellent, in his final film role. He plays Doctor Moonlight Graham, who missed out on a chance to play in the bigtime. He gets relatively little screen time but brings so much weight to the role that you instantly understand and empathize with the character. He just wanted to give a wink to the pitcher, to make them feel like he knew something they didn't. When his younger self, played by the underrated Frank Whaley (check him out in Luke Cage!), finally does it, he gets a tight pitch straight to the head in return. It is a funny and sweet moment. To save Ray and Annie's child, Moonlight Graham steps over the line and returns to his old self. This is the great sacrifice of the movie. By giving up who he could have been, Graham accepts who he was meant to be, that is a doctor of some skill and reputation. This is one of the lessons, the movie has to teach. Don't try to be who you thought you were going to be, be the man who you were meant to be.

Ray Liotta is just crazy beautiful as Shoeless Joe. His eyes! His beautiful eyes! He gives the movie so much extra character by playing Shoeless Joe as a person at once enlightened to the mysteries of life, and still someone who doesn't really know what is happening and why. My mother taught me how to find a man beautiful, from her obsession with the legendary Johnny Depp to the immensely talented Robert Pattinson. Mary taught me why Ray Liotta is so beautiful in Field of Dreams. His mystery, his gentle heart, his skill at his chosen profession. Mary has taught me so many things but this is one that will always stay with me.

Field of Dreams makes me feel nostalgic for an earlier time, when I was wrapped up in the love of my parents, who still loved each other. It would be unfair however, and untrue, to say that that is all it offers. It is on its own merits, a well observed, supremely touching and interesting movie. It is not really about baseball, it's about the way we live our lives in a perpetual state of denial and unable to address the things that are truly important. When John Kinsella, Ray's father, finally appears in the final moments of the movie to play catch with his son, I get very, very teary. Through the unwavering dedication of Ray Kinsella to this powerful force of good, he gets what he always needed: that chance to be with his father again and to make peace.

Kevin Costner is an actor that has mostly fallen by the wayside these past few years, except in the excellent Man of Steel where he tore the screen apart with his charisma and charm, and the rather good Hidden Figures. He is though a supremely gifted talent. In Field of Dreams, he finds the best role in his career, something that he will be remembered for, for many years to come. He finds his peace. He finds what he had been missing. This is the core of Field of Dreams. This is the reason why it is appreciated so much, far and wide. Your father loves you and misses you. He only ever wanted the best for you. Don't be hard hearted. Be open to forgiveness, both on the giving and receiving end. I hope Noel understands that I acted the way I did because of my insecurities and my limitations. I hope he understands that I loved him more than anything else, and that I would do anything for him, including forgiving myself for my sins.

My parents taught me about the possibilities of life and death through Field of Dreams, not through the Bible or the Koran or any other slightly zany book. I am the better for it. I believe that life doesn't end at death, in a conceptual way at least. We live on in the memories of those who we have touched and whom we have loved. If you have that strange dream that brings a loved one back from death, and you don't know how your brain could have managed such an accurate picture, this is the movie for you. Life after death doesn't need to be ridiculous or solipsistic. It can be something that we can all agree on. It can be something that unites us. Whether that is through the medium of baseball or not, Field of Dreams is the movie.