Why I Love Lana Del Rey 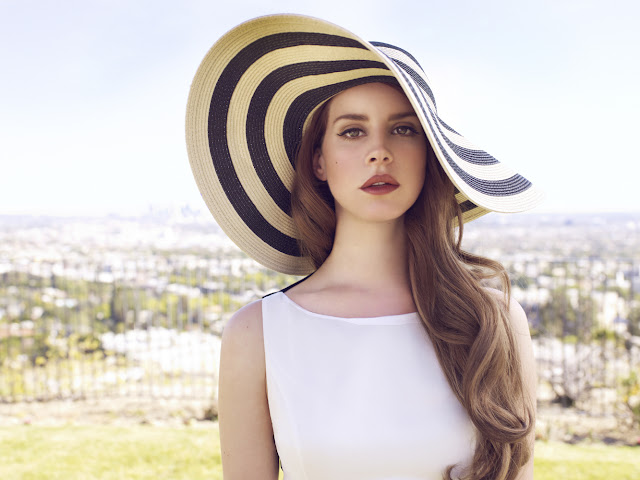 "Yeah my boyfriend's pretty cool but he's not as cool as me."

Lana Del Rey is one of the coolest damn people of all time. She is exudes it from every word and every look. You know all of those women hating mutants who said that Lana Del Rey was a fake? That she wasn't being real or honest and that she was trying to trick impressionable Pitchfork (some amount of vomit) readers to buy into her con? Well, these people are really, really fucking stupid. The authenticity crowd can eat a bushel of dicks and choke on them. Lana Del Rey has released five albums since 2010, including one EP titled Paradise, included on the deluxe edition of her 2012 album Born To Die. Her music is melancholy, achingly beautiful and all around compelling. Gorgeous winding melodies, and production that is somewhat out of time, neither retro or modern, but some combination of both. Lana Del Rey is herself somewhat out of time, yet is one of the most inspiring and gifted artists of her generation. She would have done well in the 50s and 60s. (And hell the 70s, 80s and 90s too.) Don't believe me? Just listen to her amazing cover of Blue Velvet. How has she not been cast in a David Lynch movie/show already?? David! Get on the Lana Del Rey tip!

My favourite album of Lana Del Rey is her third, Ultraviolence. It contains my favourite song by LDR, Brooklyn Baby, originally written to feature Lou Reed, who is mentioned lovingly in the lyrics. It is a great shame that we never got that collaboration, surely something out of a big box of magic goodness. She has a lot in common with Lou Reed, not least of which is her sense of cool and style and never give a fuck attitude. She just does what she was born to do and people can take or leave it as they wish. They say I'm too young to love you. I don't know what I need. They think I don't understand the freedom land of the 70s. I think I'm too cool to know you. You say I'm like the ice I freeze. I'm churning out novels like beat poetry on Amphetamines. Well, my boyfriend's in the band. He plays guitar while I sing Lou Reed. I've got feathers in my hair. I get down to Beat poetry and my jazz collection's rare. I can play most anything. I'm a Brooklyn baby. I'm a Brooklyn baby. Ultraviolence also contains the sublime Old Money, perhaps LDR's most beautiful vocal performance. It is, as many of her songs are, sad, desperate and dripping in melancholia. It also has something hopeful in it though, in spite of the bleakness, when she sings But if you send for me, you know I'll come and if you call for me, you know I'll run. I'll run to you, I'll run to you, I'll run, run, run. I'll come to you, I'll come to you, I'll come, come, come.

Red racing cars. Sunset and Vine. And we were young and pretty. I don't think there could be a better candidate for a collaboration with Brian Wilson than Lana Del Rey. And indeed it was set to happen on Brian Wilson's last album Pier Pressure, said to feature on The Last Song. Something went wrong - hopefully not the obnoxious fear of modern music from some quarters of the Beach Boys' fan communities - and it did not happen. But man alive, can you imagine if it had? If LDR had been a bit older, well a lot older, I could easily see her being one of Brian's proteges. There is the same California gloom to LDR's work. The Beach Boys' Pet Sounds and Dennis Wilson's Pacific Ocean Blue seem to have made an indelible mark on her music. We are the better for it. I can hear the paean to youth in the former, and the long lost youth in the latter. I can hear the Don't Talk Put Your Head On My Shoulder cry for intimacy and hand on hand love.

It is not a coincidence that I love Lana Del Rey and The Weeknd. They are good friends and have collaborated on four songs. The first, Prisoners, featured on The Weeknd's fifth album Beauty Behind The Madness. LDR also featured on the end of Party Monster on his sixth album Starboy, saying "Paranoid," and on the Stargirl Interlude. Their most recent collaboration is on the title track of LDR's fifth album Lust For Life. It is a desperately beautiful thing to see them work together, and nowhere are they better than on Lust For Life. Where as Prisoners was a somewhat awkward collaboration, and the work on Starboy was pretty inconsequential, Lust For Life just nails it. It is a love song. And a song for the bedroom. LDR and The Weeknd working together = LOTS OF BABIES.

On that point let us just discuss LDR's powerful sensuality: it's pretty, pretty good. I mean, LDR is so seductive, so sexual and yet still full of love. Her specialty is in making Noir Pop, just as her friend Abel makes Noir R&B. Her most famous song, Video Games, is a perfect example of Noir Pop in action. Hear a story about a girl you might know, who is forever subject to the whims of a dull and boring man obsessed with his own bullshit. It's you, it's you, it's all for you. Everything I do. I tell you all the time, heaven is a place on Earth with you. Tell me all the things you wanna do. I heard you like the bad girls honey, is that true? It's better than I ever even knew. They say that the world was built for two. Only worth living if somebody is loving you and baby now you do.

LDR is the woman on the sidelines, waiting for something to come along. She makes something so ordinary seem so sinister and filled with electric sexuality. Her best songs are those that get to this Noir desperation and hopeless existence. While you can argue whether her songs are feminist or not, you can't argue that they are incredibly well observed and on point. The sheer, overpowering feeling of desolation and isolation permeates her work, the relationships that border on abuse and rape, the cold touch of a lover you don't love, and the warmth to be gotten from drink and drugs. Her insight is on the level of a Leonard Cohen or a Bob Dylan or a Joni Mitchell. I am also reminded quite a bit of Carly Simon, particularly her classic, mega-hit You're So Vain. Both Carly and Lana are brilliantly sarcastic, full of razor wit and a deep, deep longing to find someone who doesn't make you feel like a complete, worthless shit.

Lana Del Rey is one of the truly great modern artists out there working today. Don't bother with the nonsense that she's inauthentic or phony. She's not. She is playing a character just like Dylan did before her. What's wrong with that anyway? And try not to sound like a dullard when you explain it to me. This is performance. This is Art. Get with the program people! Her best work is some of the best by anyone, anywhere, at anytime. The cool, emotionally savaged tint of a Noir sunset defines her work. She is a femme fatale, but also a plain old victim, her fears of being cast aside when her looks fade, showing up strongly in many tracks, particularly the brilliant Old Money. If you're not listening to LDR, you're missing out.