Why I Love Manhattan Murder Mystery 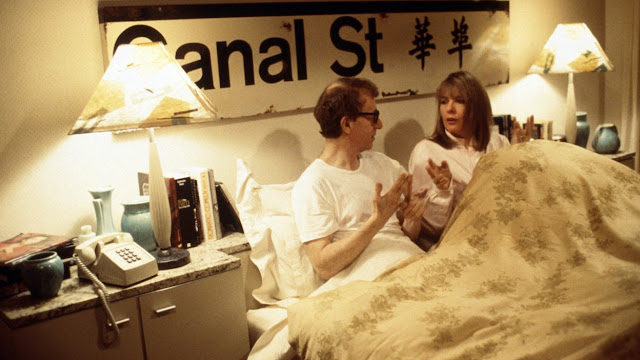 "Claustrophobia and a dead body. This is a neurotic's jackpot."

Woody Allen is, along with David Lynch and Sofia Coppola, one of my very favourite film makers. His movies just make me happy. From his comedies to his dramatic work, I love it all. I can honestly say that I have never seen a Woody Allen film I didn't like. His worst is better than most. Manhattan Murder Mystery is a film I first saw with my father. It combined everything I had loved about his earlier work like Annie Hall and Manhattan with a goddamned MURDER MYSTERY! As I previously discussed in Why I Love Columbo, murder mysteries are something I adore with a passion and this is one of the best. It follows Woody and Keaton as they become embroiled in a murder committed by their neighbour played by Jerry Adler in a role that is at once friendly and kind and also terrifying and dark. After Adler's wife's sister dies, they hatch a plan to get her money. They will use the body to say that the wife died. The wife will then pose as the sister and clean out her bank account. Adler then kills his wife so he can have all the money for himself and be with his much younger girlfriend. Keaton convinces Woody to solve the murder and bring the killer to justice.

Manhattan Murder Mystery was written by Allen with his old friend and collaborator Marshall Brickman, whom he co-wrote Annie Hall with. It so happens that the film began as an early draft of Annie Hall, which you can see through and through, in what is essentially a story that imagines what would have happened had Diane Keaton and Woody Allen stayed together in that classic movie. It is then a kind of sequel to Annie Hall, almost like a DC Elseworlds re-imagining. Keaton and Woody are such good friends in real life, and were at one time an item, that the chemistry is just as electric as it was in their earlier work.

The humour in the movie comes from Woody's reluctance to get involved with the dark side of life, putting up as many obstacles in front of Keaton as he can possibly muster. "I forbid. I forbid you to go. I'm forbidding! Is that what you do when I'm forbidding?" There are some really funny exchanges between them, particularly the scene in the lift when they discover the dead body of the neighbour's wife. Woody's sheer panic as they are trapped in the lift makes me laugh every damn time. As a reluctant hero, Woody is perfect. This is my most loved performance of his, something that is extremely funny while showing a sweet and loving side, especially the scene where they discuss the day in bed.

Manhattan Murder Mystery also stars Alan Alda and Angelica Huston, both of whom are supremely funny. Alan Alda has starred in three Woody Allen films, including 1989's Crimes and Misdemeanors where he plays a wonderfully pompous arse. There is something about the chemistry that he and Woody have together that just electrifies the screen with super funny energy. Alda plays Ted, a character who is very likely in love with Keaton, and someone who Woody is clearly jealous of. That Alda is supportive of Keaton's investigation and Woody is not, just makes it all the worse. Huston plays a writer who is attracted to Woody, and who eventually convinces him to go along with the murder mystery investigation. This in turn makes Keaton jealous. These little character touches make the film so much more than a genre picture. You feel for these characters and are behind them 100% as they take a dip in the wild side of life.

My favourite moments in the film are those that get to the heart of the murder mystery. When Huston thinks of a scheme to trap the neighbour by staging a fake audition for a play for Adler's much younger girlfriend. They take the words, edit them and switch them around and use multiple tape recorders to make it sound like Woody and Keaton have somehow recovered the wife's body from the molten lava and are using it to blackmail him. It is a thrilling scene and one that gets to the heart of why I adore murder mysteries. Another of my favourite few scenes are when Keaton and Woody stake out the hotel where the wife is staying, the two posing as detectives to try to catch the wife and solve the mystery. I also adore the ending where The Lady From Shanghai starring Orson Welles is playing in Adler's cinema.

(Anything written about Woody Allen now has to come with a disclaimer. Usually it says something like, I love these movies in spite of what a horrible person he is. Well, I don't feel the need to do that. I don't believe for one second that Woody Allen did the abhorrent things some attribute to him. I think Mia Farrow is a liar and a fraud, who has shamed herself by slurring the character of a good man, and a great artist. I like the man and the artist.)

Manhattan Murder Mystery is my favourite Woody Allen film. It is just as funny, sweet and heartfelt as any of his classics, AND has the added bonus of being a damn good murder mystery. The performances are great across the board and there is a real sense of discovery and the unraveling of a great mystery. The film is about how two lovers in a long term relationship come to reignite their love for each other by stepping out and seeking adventure. Both are heroes, even if they don't always know what they are doing. It is one of the greatest Woody Allen films, and I highly recommend you check it out.