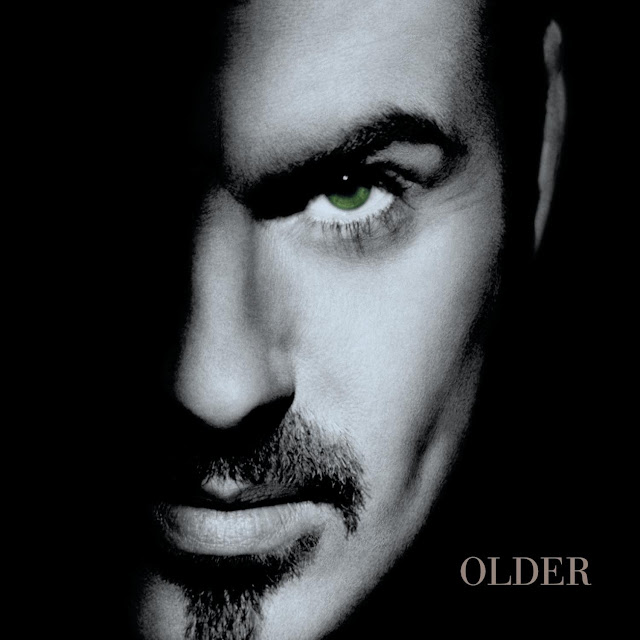 "I should have known

It seemed too easy
You were there
And I was breathing blue
Strange
Don't you think I'm looking older?
But something good has happened to me
Change is a stranger
You have yet to know
Well you're out of time
I'm letting go
You'll be fine
Well that much I know
You're out of time
I'm letting go
I'm not the man you want
I should have known
It seemed so easy
You were there
I thought I needed you."

Older, released in 1996, is George Michael's masterpiece. It is, as the title suggests, the most mature and intriguing album in Michael's career. It is a soulful, gorgeous thing. George Michael was one of the best songwriters of his generation, as well as possessing a serious talent in performance and a voice that knocks you over. Older is an album that has, somewhat appropriately, gotten better with age. A lot of people unfortunately remember George Michael for Wake Me Up Before You Go-Go, and nothing else. Not that that song isn't all kinds of wonderful, but Michael had so much more than canny pop hits to offer. The depth of emotion and a beautiful kind of despair at isolation from being separated from your fellow man, makes this an album that will always be in my favourites of all time box of goodness.

Let's start with the title track, because fucking wow, it is powerful! Plaintive and full of emotional wallop, it is a contemplative bit of genius. The way it builds to the chorus: strange, don't you think I'm looking older? Older is a song that defines its album, in the way that it conjures up a Noir torch song, that calls back to an earlier time. Age gets us all in the end. I see Chet Baker singing this song, its mournful and desperate quality echoing Baker's fragile and perfect beauty. It is a shame that Baker was not alive to hear this song, as I am sure he would have loved to sing it, just as he did Almost Blue for Elvis Costello.

"Maybe your Momma gave you up boy. Maybe your Daddy didn't love you enough girl." Star People is one of the get on the floor songs on Older with a chorus that just destroys all comers. Michael is so passionate and soulful here, displaying his chops for Soul and R&B, with that Disco flavour. When Michael goes into "Did you get off on a bad foot, baby? Do you have a little tale to tell?" I lose it. That vocal delivery so full of soul that it recalls Michael Jackson in one of his best vamping modes. Fastlove is the brother and sister of Star People, with a stellar production and a smooth as fuck vocal. Get off the wall! Get on the floor! You gotta get up to get down.


When we lost George Michael we lost one of the true greats of the late 20th Century. While all of his albums are pretty damn great, I put forward my vote for Older being his masterpiece, with a depth of emotion, sheer musical brilliance and hooks for days and days that very few artists can compare with. It is sad to me that some people will remain obsessed with Michael's demons and not with the consistently dazzling and assured quality of his music. Take the word of your friend Muggins, if you *haven't* heard Older, DO SO NOW! It is an album that I appreciated at the time of its release, in my limited capabilities to appreciate music as a ten year old Paul, but in the years since its release over twenty years ago, it has become one of my most treasured musical loves.