Why I Love Luke Cage 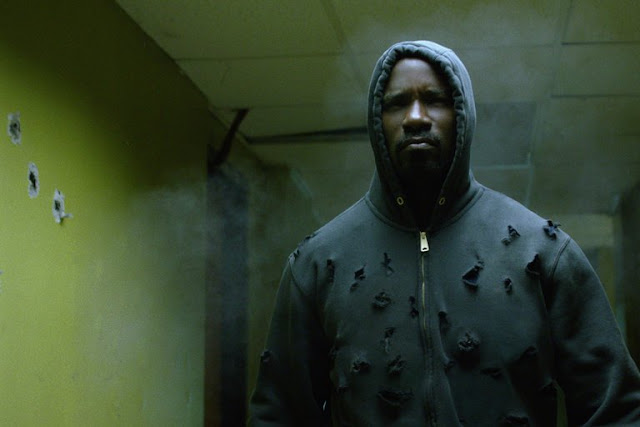 Luke Cage might just be my favourite Super Hero/Comic Book movie of all time. It has far more in common with The Wire, for the way it examines race and issues of social justice, than it does with pretty much any standard comic book fare. It is, along with Batman V Superman and Nolan's Dark Knight Trilogy, one of the smartest comic book adaptations out there. Unlike Batman movies though, I am not well acquainted with Luke Cage comics, so I cannot speak on how faithful the show is towards the source material. When I wrote for a comic book website many years ago, I never really cared about how many things adaptations changed, as long as the end result was pleasing, and boy is Luke Cage pleasing.

The number of characters who are compelling is high. Luke Cage himself is, in my opinion, far more interesting and big time shout out loud in FUCK YES shouts than the lead in Black Panther, which it shares quite a bit with. When one considers the irritating and disingenuous claim by Marvel Comics' Vice President of Sales David Gabriel, that diversity was driving readers away from their titles, a quick look at Luke Cage, its success in artistic and commercial terms, tells you why that man is full of shit. Here is a show that appeals to all people, not just those of African descent. People love a hero who has to suffer through prejudice. Even if the experience is not familiar in its details, everyone has experienced a time when society made them feel less than worthwhile.

Mike Colter might just be the most handsome man after Idris Elba and Jeff Goldblum, that I have ever seen. I loved his scenes with the great Kristen Ritter in Jessica Jones and we are spoiled in Luke Cage for strong, dazzling female talents. Misty Knight! What a name and what a character! Then there is the common factor in all Marvel Netflix shows: Rosario Dawson as Claire. I have always liked Dawson but she is just incredible in all of these shows, so, so likeable and a real hero, even though she doesn't have superpowers. The strength of the cast in Luke Cage is, even considering the high standard of these Marvel shows, exceptional. This is why the anti-diversity crowd are full of shit. Whoever said that true variety is a bad thing? Being able to relate to a character is so much more than someone having the same skin colour as you. True diversity in art is always a good thing, because it allows us to explore all of the ways that we relate to each other. I don't think it's unreasonable to suggest that there is something deeper that binds us together than what religion we have, or who we choose to sleep with.

Speaking of skin, I think it's a brilliant thing that Luke Cage's main power is having unbreakable skin. In a similar way to Rocky Horror's exploration of sexuality and gender, sometimes speaking on the obvious things are the works of true genius. The thing that sets him apart in the world, in the eyes of bigots, is his greatest weapon in the fight against crime. The fight scenes between Luke Cage and the various dangerous human beings are my favourite of all the Marvel shows, and quite possibly all comic book adaptations. They are smash-mouth slobberknockers. My only small complaint is that one of the great sequences which is scored to Wu-Tang Clan's Bring Da Ruckus, is somewhat ruined by not having the uncensored version. BRING DA MOTHERFUCKIN' RUCKUS should have been heard in all its glory. Considering the very violent and sexual nature of the show, it seems a little childish that simply saying the word fuck is such a big deal.

Big shout out to Mahershala Ali as Cottonmouth, one of the most charismatic and interesting villains in recent memory. It is a great shame that he is dead, though Erik LaRay Harvey is excellent in his own right. Ali is of course the first Muslim man to win Best Supporting Actor for his exquisite work in Moonlight, and he brings that depth of performance and a formidable emotional power to his role as Cottonmouth. Alfre Woodard also deserves a mention here, especially the scenes between her character and Cottonmouth. She is perhaps the closest thing to being a character taken from The Wire, as a corrupt and dangerous politician. Woodard is really good as Mariah, bringing a level of familiar and casual evil dressed up as social justice.
Luke Cage is closest to The Wire and not other comic book movies, because its characters all breathe with a reality that is absent in many comic book movies. They reflect the real world, and are written with such clarity and insight that the first thing that really hits you, is not all of the great action and exquisite aesthetic violence, but a feeling that you are actually learning something of value about humanity, and how we should treat each other. There has been a lot of interesting analysis and appreciation of Black Panther recently, given its unbelievable commercial success, especially around how it empowers black women and men, and gives them something that has been sadly, and disgracefully absent in pop culture. While I agree with all of that, and am a fan of Black Panther, I think the true credit should be given to Luke Cage, which did it first, and in my opinion did it better. Not that I am mad that there are two excellent superheroes who are people of colour, don't get me wrong, but Luke Cage has been somewhat forgotten recently in the dialogue around race and comic books, something which should be fixed when Cage returns in the coming weeks. Until then comic book fans, hold tight and bring the motherfucking ruckus.