Why I Love Red Dead Redemption 2 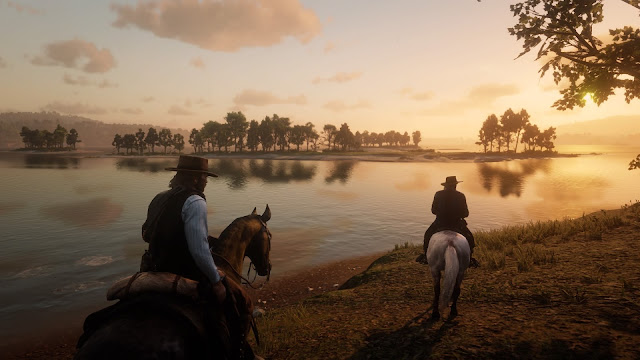 "I was born here and I'll die here, against my will. I know it looks like I'm moving, but I'm standing still. Every nerve in my body is so vacant and numb. I can't even remember what it was I came here to get away from. Don't even hear the murmur of a prayer. It's not dark yet, but it's getting there."

I was waiting for Red Dead Redemption 2 for nearly eight years. It did not disappoint. Rockstar are The Beatles, Hulk Hogan and Steven Spielberg of video games: they may not be the last word in their medium but underestimate their talent and capacity for beauty at your peril. I did not play that many new games in 2018, so I cannot rightly compare it to all of the new games released this year. I can however compare it to other Westerns, and it is, no fooling, one of the greatest Westerns ever made in any medium. The standard that Rockstar had to reach to compare with the original Red Dead Redemption was a formidable challenge. Yet they reached that and managed to somehow raise the bar even higher.

Like the original, Red Dead Redemption 2 reveres the natural world, and like many great Westerns, is about the desire to live free in this world without the shackles and injustices of structured life. Unlike GTA V, which while brilliant in many ways was decidedly not a moral game, Red Dead Redemption 2 is about that struggle and the pain that comes from trying to do the right thing, even when you are a bad person. Arthur Morgan is just as compelling and complex a character as was John Marston, and it is a transformative experience to follow him on his journey. The moral choices given to the player are layered and not always obvious - though there are a few of kill this guy or don't - and it affirms my belief that the most important thing in crafting moral choices is that the answer in of itself is meaningful. I don't care if I get better guns if I do X, I want the question of what to do to matter, without any other rewards or punishment. Red Dead Redemption 2 is a deeply moral game, even when you are doing bad, and is the most grown up and emotionally rewarding game that Rockstar have ever produced.

I have watched a lot of Westerns in the run up to this game, and I can say with some confidence that Rockstar have solidified their reputation as one of the greatest developers working today, yesterday and tomorrow. This compares with the greats: The Searchers, The Treasure of the Sierra Madre, The Good, The Bad and The Ugly and Deadwood. It is as switched on and on point as Broken Arrow or Dances With Wolves when it comes to depiction of Native Americans, but more importantly, it is just as artistically fulfilling as those movies. This isn't a box ticking exercise, this is a rich and complex world, written beautifully and executed even better than that. On that point, Sadie Adler is perhaps the greatest character that Rockstar have ever produced. The (justified) criticism of GTA V around the depiction of women was obviously taken to heart, and Rockstar should be applauded for turning their hand to creating female characters that are not only as deep and brilliant as their male counterparts, but are in many ways their superior.

The Western is, just like Noir, obsessed with the anti-hero and the outlaw. Red Dead Redemption 2's guiding principle is Outlaws For Life. It is not the pursuit of money that defines these women and men, but instead the rejection of the idea that one must adhere to the rules, even when they are unjust or to the benefit of the rich and powerful. There is much to take from this game that applies to today, most especially the reality that is contained in this line by Bob Dylan: "Steal a little and they throw you in jail. Steal a lot and they make you King." If your heart is on the right side of this line, then you will find much that resonates with you in Red Dead Redemption 2. Not to say that the player is a good person necessarily, whether embodying Arthur Morgan or John Marston, just that they are trying to be someone who keeps love in their heart, in spite of all the cynical, nasty bullshit that fills our lives. The struggle to be good in a rotten world is what this game is all about. The decks are stacked. The fix is in. And yet, here you are, trying to do the right thing.

The world of Red Dead 2 is the biggest star of the show. The immaculate detail and design of the game world might not surprise those whom experienced Rockstar's past games, but it is still capable of impressing beyond measure, with its intricate parts and details. This is a world that always feels real and lived in. Exploration is rewarded at every turn by insight into this vision of turn of the 20th century America. Missions appear when you discover a new town or outpost, and you feel like you are the first person to have stumbled upon it, even while Rockstar must have known that you were destined to look there. Just last night, on my second playthrough, I discovered that Tumbleweed from the first game was still a live and burgeoning town and not the shell that existed in the first Red Dead Redemption. This was a surprise and a thrill. This game has so many secrets. 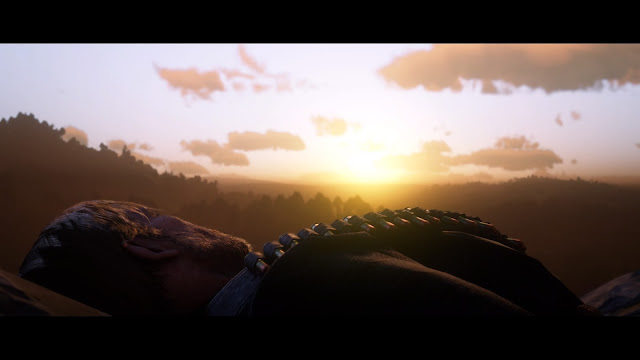 "There are no mistakes in life some people say
It is true sometimes you can see it that way
But people don't live or die people just float
She went with the man in the long black coat."


The ending is a thing of beauty and no mistake. I played honorably and I saw the sun set on my life. I am told that those who played with low honour met a less dignified end. It is not as surprising or as shocking as the original but it is just as poetic and powerful. This is fated destruction. That last hand, outstretched to offer another hope in a hopeless time... one last go in the hope that all is not lost. Those who haven't done bad things in their life, and who have always been received warmly by all human beings, don't understand the beauty of this ending. They think that these games are vicarious thrills and nothing more. They are in fact a guide to how we ought to live. Red Dead Redemption 2 is about how we need to persevere even when things seem utterly lost and long gone. If you can only spy that sun, that natural beauty, that glowing heart, you will keep yourself and your soul.

Red Dead Redemption 2 will be with me for as long as I am alive. It is a thing of supreme artistry and beauty. To say that this is the game of the year is a serious understatement: this is one of the greatest works of art of the 21st century, and is destined to live as long as there are video games and Westerns. It stands up to all Westerns that I have seen and I have seen quite a few. It is a shame that so few reviewers and writers who have covered this game have the qualifications to truly celebrate and appreciate the work that Rockstar have done here. To say that this might very well be the greatest Western of the 21st century - and quite possibly the 20th century - is not hyperbole or exaggeration; it is just an accurate reading of reality.