WHY I LOVE AFTER HOURS 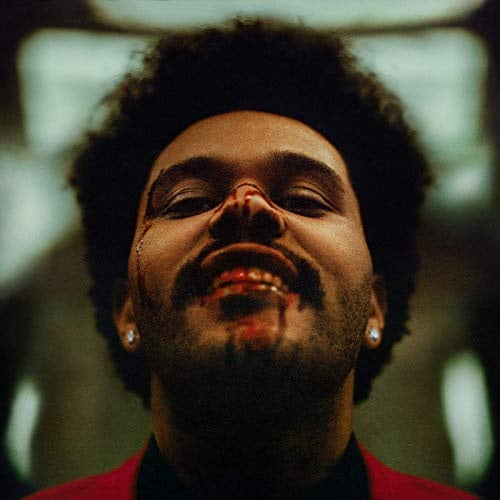 "Take off my disguiseI'm living someone else's lifeSuppressing who I was insideSo I throw two thousand ones in the skyTogether we're aloneIn Vegas, I feel so at home I'm falling only for the nightSo I throw two thousand ones in the skyOh, oh, oh, how much to light up my star againAnd rewire all my thoughts?Oh, baby, won't you remind me what I amAnd break, break my little cold heart?"

AFTER HOURS is The Weeknd's greatest work, eclipsing his (admittedly rather good) straight Pop work, and surpassing even the greatness of Kiss Land, Trilogy and My Dear Melancholy,. It is an incredible thing to see Abel Tesfaye succeed on this scale with an evolution of the Noir R&B that made him famous, back in 2011. Yes, there are savvy Pop sensibilities mixed into the sound, as on 2020 standout "Blinding Lights", but much like "Wanderlust" did on Kiss Land, this is a momentary reprieve from the bleak, dark and oh so beautiful sounds of The Weeknd operating at the height of his power. "Blinding Lights" is a Pop song, it is true but in context it is an amphetamine jolt, juked on Benzedrine. It is a late night, blistering, Neon soundscape, luring young and impressionable people into a world that expresses desperate and dangerous self-loathing. Sex that delays the inevitability of our death; sex that dehumanizes the participants. Dead eyes, drugged up, numbed, gone from the world.

The themes that are woven through the album are not just simply echoes from The Weeknd's past, but a powerful, adult progression of the sound expressed on his first mixtape, House of Balloons. Much has been made of the change of tone, and stark contrast between those early songs that glorified excess and these that see the folly of it all. There is excess here, but as on "Alone Again," where Abel sings: "Check my pulse for the second time, I took too much, I don't wanna die," a definite sense of fear and regret for his addictions, for his precarious balancing act with illicit substances. The crushing isolation and need for love that saves, that was defined so powerfully on Kiss Land, is immediately apparent here. When I predicted that the success of My Dear Melancholy, would have a significant impact on AFTER HOURS, it seems I was correct. That brief, but no less powerful for it, album was a test it seems, to see if the public at large, and not just committed XO crew, could possibly take that underground sound and project it large across the world.

This is a concept album of the depth of fears that come when one is alone with their thoughts. From the opening track which has all the power and potency of "High For This" and "Professional", this is an album that demands to be heard in one go. By referencing his past work, The Weeknd elevates the already great albums that came before, and undoubtedly the ones that are hopefully to follow. When Abel sings on "Snowchild," "Cali was the mission but now a nigga leaving," there is such an incredible poignancy and sadness to it, that it makes me cry almost every time that I listen. The way the song flows into "Escape From LA" is perhaps the greatest thrill of the album, The first six songs on AFTER HOURS come in pairs, each building on those that came before. By the time the listener reaches the knockout single "Heartless," it is apparent that this is The Weeknd's greatest work, bar none.

The production on the album is astonishing. Producers include, among others, such legends as Illangelo and DaHeala, the great Pop producer and songwriter, Max Martin, Metro Boomin, and of course The Weeknd himself. An altogether dark sound, but one that still manages to lift one up, even as it is expressing a deep state of melancholia. The shimmering Pop sounds on the aforementioned "Blinding Lights," as well as "In Your Eyes" and "Save Your Tears" are all the brighter for the sadness of the album. A late night into morning where one rallies after whiskey and beer and a hundred smokes, when the prevailing hopelessness is briefly relieved and one wonders at the possibility of one day being content and free from pain.

"Scared To Live," debuted on Saturday Night Live, is a spectacular ballad, that recalls the power of Michael Jackson.

"You always miss the chance to fall for someone else
Cause your heart only knows meThey try to win your love, but there was nothing leftThey just made you feel lonely

Interpolating Elton John's "Your Song," this song gets to much the same emotion of a deep, resonant love. Even as it is destined to never work out, it is something that you hold onto in the chance that some day down the road, perhaps things will work out differently. If there was any doubt in the past that Abel Tesfaye was the spiritual successor to the work of Michael Jackson, there is none after hearing this song. This is not merely imitation but a profound understanding of why Michael's music resonates with people so much, and that is open-hearted emotion, every ounce of one's power used to move and to heal. This is the great hope in the album: that one can recover from trauma that scars and love and live again.

It is difficult to find a suitable ending for an album, but with the title track and "Until I Bleed Out," Abel and his team have found just that. The title track, released as a promotional single, surprising all but the true faithful, that The Weeknd had returned to the sound that made him. And yet it is in no way a cheap nostalgic trip or a throwback. It is a vital, audacious evolution of that sound, something that delights with every gorgeous hook and detail. The sounds on "After Hours" are so deep, you could swim in them. "Until I Bleed Out" is a blistering, hypnotic affair, that brings one to a place of terrifying acceptance of the inevitability of not only our destruction, but that of everything else in the universe. I love it, but it really does scare the shit out of me.

AFTER HOURS is then an album that proves that The Weeknd can balance both the Pop side of his music, as well as progressing with the sound that changed R&B and music in general forever at the start of the last decade. It has been nine + years since House of Balloons, and I suspect that in another nine years people will be remembering this album as easily the equal of that incredibly influential mixtape. It is quite simply, the greatest work in the career of Abel Tesfaye, and it makes me incredibly excited to hear where he goes next.